12. The Godfather of Drugs: Ethan Nadelmann, Inside Marijuana Reform, The History of the Opioid Epidemic, Love and Ayahuasca 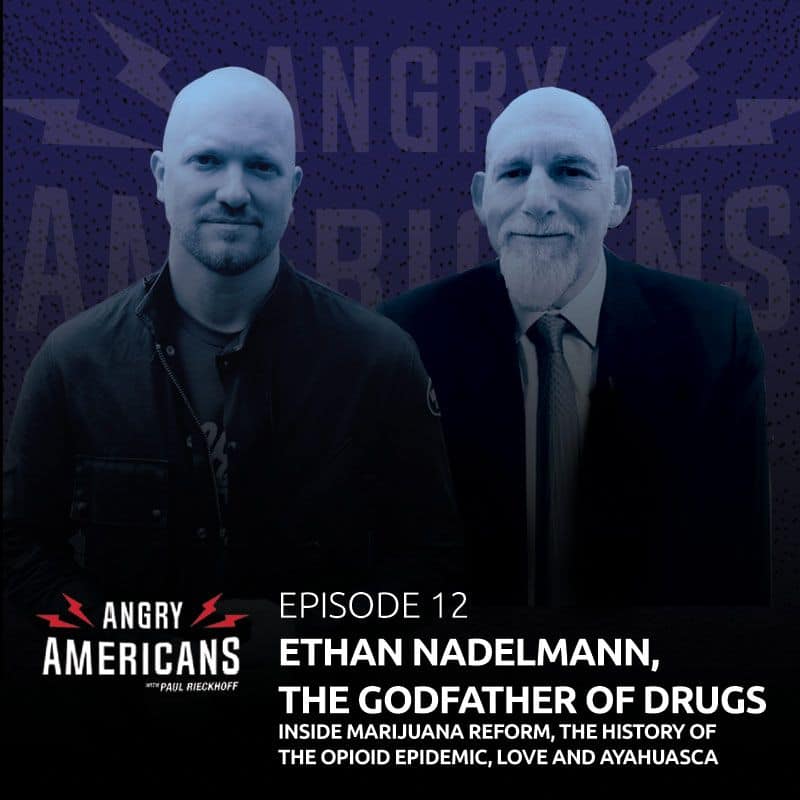 aae12This is Angry Americans on drugs. Paul Rieckhoff (@PaulRieckhoff) explores the roller coaster history of the drug reform movement and the rapidly-changing landscape of drug policy with the visionary leader Rolling Stone describes as “the driving force for the legalization of marijuana in America.”

As the Presidential candidates and the national political landscape on drugs shift by the day, Ethan Nadelmann (@EthanNadelmann) has been called America’s real Drug Czar. He is the mastermind behind the biggest changes to drug policy in US history. A Harvard PhD and the son of a rabbi, Ethan founded the groundbreaking Drug Policy Alliance (‪@DrugPolicyOrg) in 1994 and was a lead architect behind 30 years of reform to include California’s historic Prop 47 referendum—which in 2014 reduced drug possession for personal use to a misdemeanor. This defining political victory proved to be the first domino to fall in a string of historic national legal changes and unleashed a wave of legalization of marijuana in 10 states across America—with inevitably more to come.

Ethan has advised Presidents and Presidential candidates—and shares the fascinating inside story of building the early days of the drug reform movement, and of building powerful (and unlikely) political coalitions uniting conservative icon William F Buckley and liberal icon George Soros. With New Jersey, New York and others debating legalization right now, this conversation couldn’t be more timely. As with every episode of Angry Americans, it delivers the 4 I’s: integrity, information, impact and inspiration.

Rieckhoff pushes, probes and challenges. He breaks down the latest on a potential war with Iran, the shocking resignation of Acting Secretary of Defense Shanahan and the historic NBA Finals ending. And Rieckhoff continues to be among those national leaders leading the charge with his fellow First Responders to pass the 9/11 Victims Compensation Fund extension in Washington.

And for behind-the-scenes videos from this episode and exclusive video content featuring Wes Moore, Rachel Maddow, Tom Collicio, Sarah Jessica Parker and other recent guests, visit AngryAmericans.us. If you’re not angry, you’re not paying attention. Angry Americans is connecting, uniting and empowering people of all backgrounds nationwide and is powered by Righteous Media. Join the movement now.