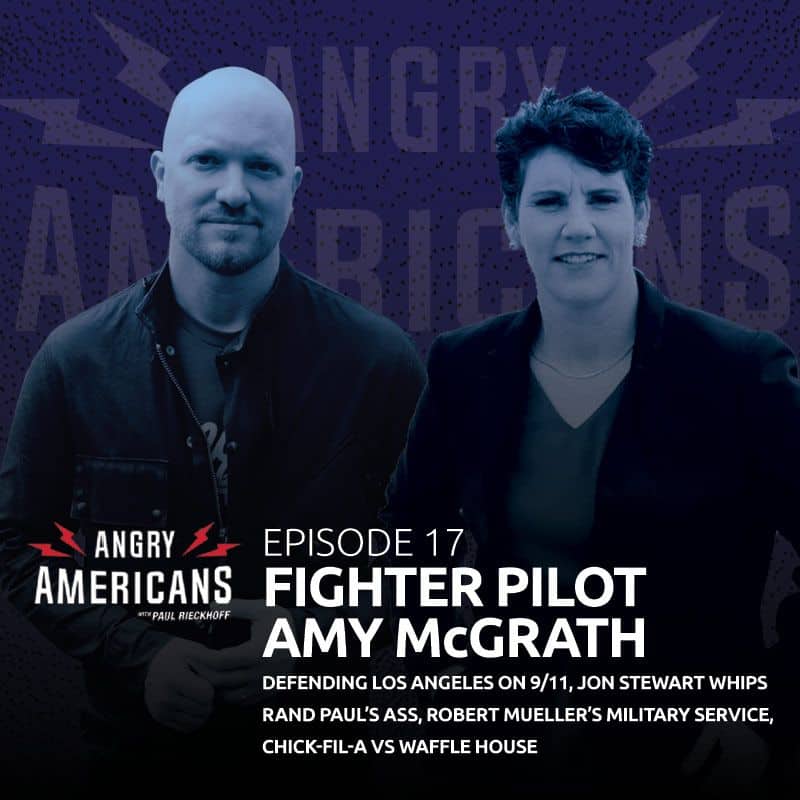 This bold new episode of Angry Americans is feeling the need. The neeeeed for speeeeed. As the trailer for the new Top Gun: Maverick movie went viral nationwide, our guest for this episode has felt that need for speed. And the need for service. She was the first female Marine Corps pilot in history to fly the F/A-18 on a combat mission.

Marine Fighter Pilot Amy McGrath (@AmyMcGrathKY) is running in the most-watched 2020 Senate race in America. After flying 89 combat missions against al Qaeda and the Taliban, the trailblazing combat veteran, former Naval Academy professor and mother of three just announced she’s running for the Senate in Kentucky versus the exceptionally unpopular Senate Majority Leader Mitch McConnell. It’s the biggest challenge of her life–and on the biggest political stage in America. McGrath sits down with fellow combat veteran Paul Rieckhoff (@PaulRieckhoff) for an exclusive and extensive discussion about her race vs McConnell, breaking barriers in the Marine Corps, being in the cockpit of an F-18 on 9/11 tasked with defending all of Los Angeles, and how she got her unique and unforgettable call-sign.

Paul also digs into the most urgent news stories in America: the Mueller testimony, the historic victory for 9/11 First Responders, Trump’s threats to drop a nuke on Afghanistan, the expanding measles threat–and lots more fun stuff. So, yes, as with every episode, there will be some whiskey. Because we need it. This pod is always an examination of the great American experiment, a distress call and a rally cry. And if you’re not angry, you’re not paying attention. But we promise you’ll leave this episode with a sense of the 4 I’s that we bring in every motivating installment of Angry Americans: integrity, information, inspiration and impact. Renowned activist Paul Rieckhoff always recommends ways to turn your righteous anger into positive action. And unites an audience that cares and is committed to making a difference in America.

This compelling episode of Angry Americans is supported by our awesome friends at Mizzen+Main (@MizzenAndMain). Mizzen+Main is an innovative American company headquartered in Texas that makes dress shirts for men that are actually comfortable. Head on over to Mizzen+Main’s website at www.Comfortable.AF Yes, that’s really their website, Use code ANGRYAMERICANS at check-out to get $10 off a dress shirt now. Mizzen and Main. It’s never felt better to look your best.

Join the movement. Download the pod now. And see behind-the-scenes videos with guests Amy McGrath, Chef Tom Colicchio, Sons of Anarchy’s Ron Perlman, Sarah Jessica Parker and more at AngryAmericans.us. If you’re not angry, you’re not paying attention. Angry Americans is connecting, uniting and empowering people of all backgrounds nationwide and is powered by Righteous Media.