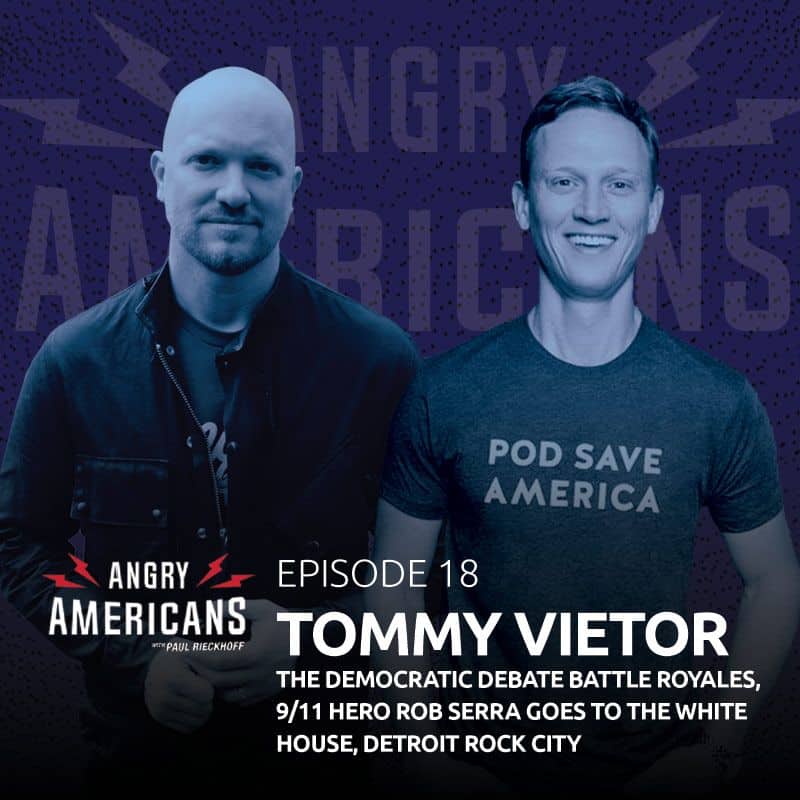 This week, the clash of the Democratic political titans finally happened in Detroit. The leading candidates fighting to take on Donald Trump in 2020 battled on two massive nights in Detroit. And Angry Americans is channeling our inner Joe Rogan, Max Kellerman and Tyler Durden and breaking down all the political fighting from a unique, informed and independent viewpoint.

Paul Rieckhoff (@Paul Rieckhoff) leads the charge and is joined by Democrat whisperer Tommy Vietor (@TVietor08). Tommy is one of the hosts of the groundbreaking podcast sensation, Pod Save America (@PodSaveAmerica, hosts Pod Save the World and is a founder of Crooked Media with Jon Favreau and Jon Lovett. He evaluates the candidates, takes us deep inside the strategies and tactics of the Democratic leaders and pulls back the curtain of debate prep from his experiences working directly alongside President Obama as only an experienced insider can.

We also check in with 9/11 First Responder Rob Serra, just after leaving the White House Rose Garden signing of the historic 9/11 Victims Compensation Fund extension bill–an issue we’ve covered closely for months. We dive into the fighting spirit and resurgence of Detroit and as in every episode, Paul has a recommendation for how to turn your righteous anger into positive action.

This rocking new episode of Angry Americans is supported by the innovators at Mizzen+Main (@MizzenAndMain). Mizzen+Main is an American company headquartered in Texas that makes awesomely comfortable dress shirts on the planet. Shirts that are must for every man now that the heat of summer has hit. Check out Mizzen+Main’s website at www.Comfortable.AF Yes, that’s really their website, Use code ANGRYAMERICANS at check-out to get $10 off a dress shirt now. Mizzen and Main. It’s never felt better to look your best.

Join the movement. Download the pod now. And see behind-the-scenes videos with guests Sarah Jessica Parker, Friday Night Lights Director Peter Berg, NBC’s Willie Geist, get some cool merch, check out what’s next and more at AngryAmericans.us. If you’re not angry, you’re not paying attention. Angry Americans is connecting, uniting and empowering people of all backgrounds nationwide and is powered by Righteous Media.