23. Trump’s Space Command Is Here. So is Hurricane Dorian. And Night Vision Eye Injections. And Scooternado. It’s Back to School Time In America. 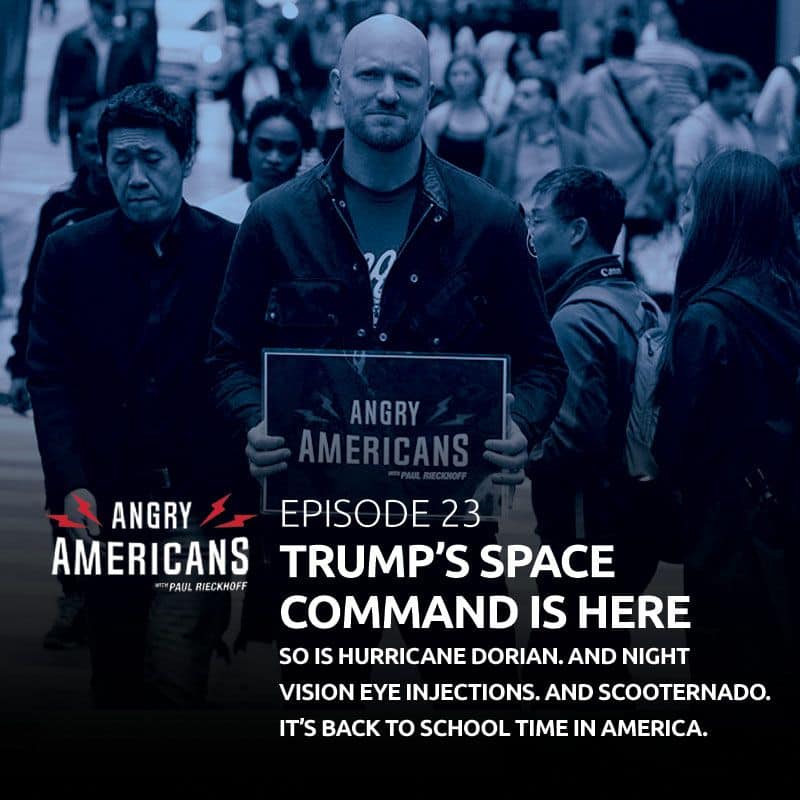 Nearly three out of every four homes in the Bahamas are underwater. The airport is gone. Countless people are homeless. And recovery from the catastrophic damage will cost billions of dollars. And now, the storm is headed straight for the United States. And straight for the Carolinas. No matter where it hits, it’ll be bad. But don’t worry, our President thinks we can nuke hurricanes. And Marienne Williamson thinks she can stop them with the power of her mind. School is back in session. And Professor Paul Rieckhoff (@PaulRieckhoff) delivers a master class on the most pressing, most vexing and most inspiring stories in America. He rips into what has him understandably angry, has many others angry, and should have you and everyone in America angry. For example, it turns out that Mexico is not paying for Trump’s wall. Our troops are. Yep. This week, the Pentagon announced $3.6 billion is being snatched from 127 military construction projects to pay for the border wall. Just as Hurricane Dorian is set to hit military bases all across the southeastern coast of the US. If you’re not angry, you’re not paying attention. And this important episode of Angry Americans will again reveal where attention must be paid most. Download the new Angry Americans podcast for free now. It’s full of integrity, information, inspiration and impact.

This dynamic new episode is possible thanks to Mizzen+Main (@MizzenAndMain). Mizzen+Main is an American company from Texas that makes the most comfortable dress shirts on Earth. Made from performance fabrics, these shirts are changing the game. Visit Mizzen+Main’s website at www.Comfortable.AF and use the code ANGRYAMERICANS at check-out to get $10 off an awesome new dress shirt now.