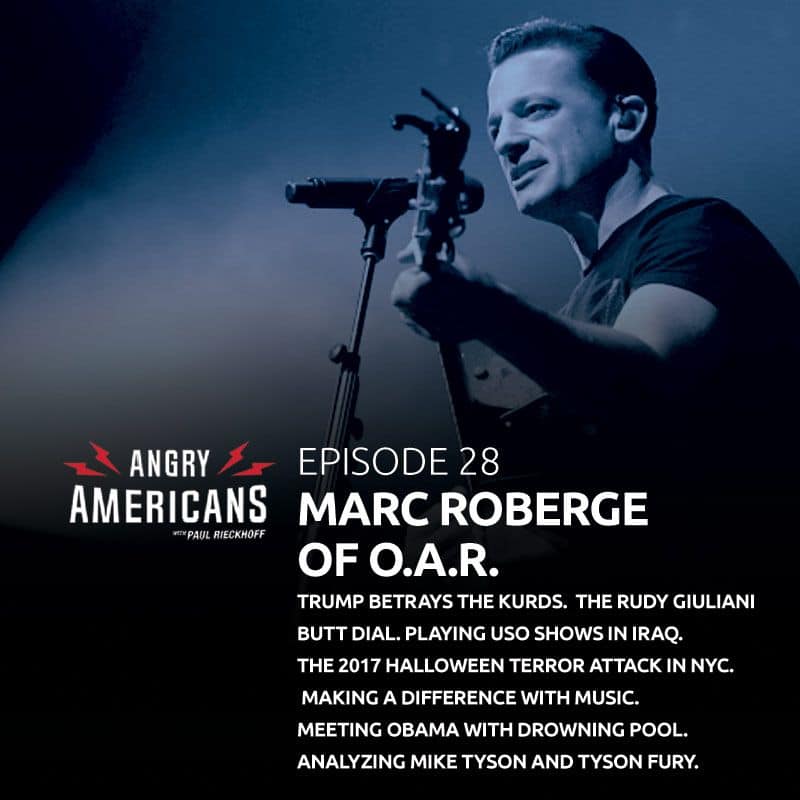 Marc Roberge (@MarcRoberge) is the thoughtful, sincere, brilliant, fun and tenacious lead singer of the massively successful band, O.A.R. (@OfARevolution). Together, with his bandmates and childhood friends from Rockville, Maryland, Marc has built one of the most successful bands of the last two decades. O.A.R is successful because of the concerts they’ve sold out and the hits they written like Shattered (Turn the Car Around) and That Was A Crazy Game of Poker. But more importantly, they’ve been successful because of the impact they’ve made. From veterans coming home with Post-Traumatic Stress Disorder (PTSD), to kids with cancer, to music programs in schools, to Habitat for Humanity, to the Special Olympics, O.A.R has been a trailblazer in making music matter. If you know their songs, you know why they’re great. If you don’t, you’ll quickly realize that you know more of their music than you thought. And you’ll find out why they’re important, iconic and inspiring.

It’s an uplifting and insightful conversation that takes you deep inside the world of music, and the story of a local high school band that went all the way to selling out Madison Square Garden and Red Rocks. If you love music, this is an episode that’s in your key.

But the music of politics in America right now, unfortunately, is not an OAR song. It’s Eric Clapton’s Tears in Heaven. Or it’s a tragic opera. It’s a gut-wrenching aria. It’s Puccini’s La Bohem. And host Paul Rieckhoff (@PaulRieckhoff) artfully takes Angry Americans (@AngryAmericans) deep inside where music and politics collide and through the urgent stories you need to know about.

And after 4 weeks, General Motors workers are still on strike. Impeachment is gaining steam. Our President sold-out the Kurds, leaving them to be slaughtered by the Turks–who have now crossed the border into Northern Syria. There’s a new scandal at the Department of Veterans Affairs. The Minnesota Twins collapsed in the playoffs yet again. The Jets, Bengals and Dolphins haven’t won a game. And Paul got a butt-dial from Rudy Guiliani. Yes, really! As we creep closer and closer to Halloween, October is looking scarier and scarier by the day. But don’t fret. Paul takes you through all of it, with his trademark independence. And the 4 I’s: Integrity, Information, Impact and Inspiration.