32. Bob Woodruff. The Meaning of Veterans Day. Trump Crashes Our Parade. Standing Up For Heroes. Living with Real Rocks in Your Head. Journalism in the Line of Fire. 36 Days in a Coma. Booing the President. 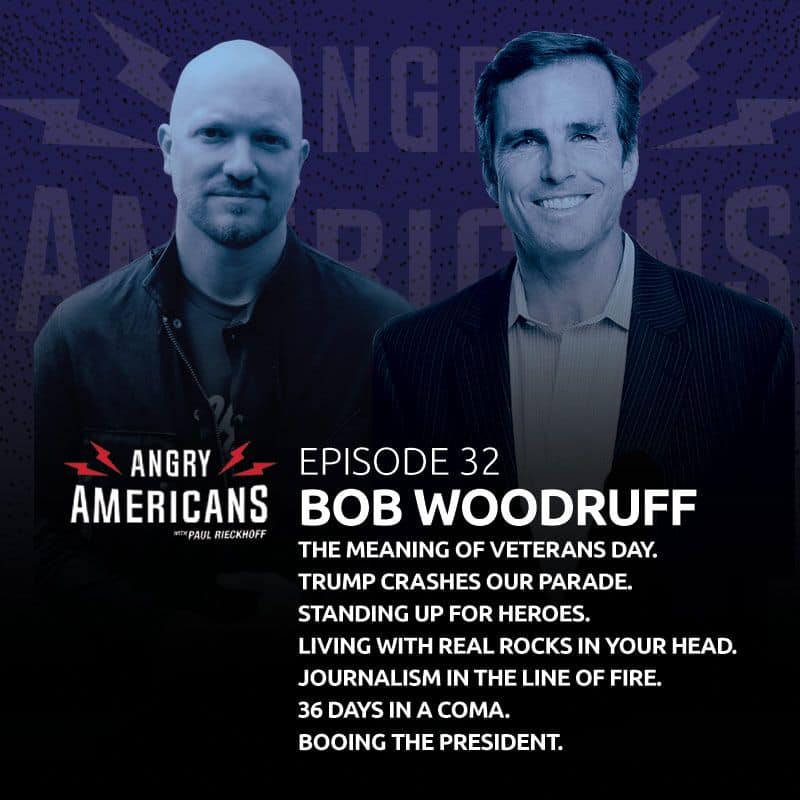 Bob Woodruff (@BobWoodruff) is a true American hero. A walking miracle. And one of the greatest advocates in America for troops and veterans. In 2006, Bob was reporting for ABC News from the front lines of Iraq when the vehicle he was riding in was hit by a roadside bomb. Woodruff sustained massive shrapnel wounds to his head and body. He was evacuated and kept in a medically induced coma for 36 days. Miraculously, Bob recovered. Slowly, steadily, bravely. And alongside his amazing wife, Lee, Bob has gone on to inspire a nation and dedicate himself to helping veterans. He founded a nonprofit, The Bob Woodruff Foundation (@Stand4Heroes), to help post-9/11 injured service members, veterans, and their families that has raised tens of millions of dollars and supported hundreds of organizations nationwide. He’s galvanized corporations, comedians and superstars from Bruce Springsteed to Jon Stewart to Sheryl Crow. And he continues to report on important stories from around the world for Good Morning America, ABC World News and ESPN’s E60. Bob is a tireless reporter, a dedicated husband, and father of four children. [19:18] Angry Americans (@AngryAmericans) highlights the helpers. And especially as Veterans Day approaches, there are few that are greater helpers than Bob Woodruff. After hearing this pod, you will be inspired.

When Bob returned to reporting for ABC in 2007, his very first interview was with our host, Paul Rieckhoff (@PaulRieckhoff). Paul and Bob have reminded friends for the last 12 years, and worked to drive national attention and support to the plight of our veterans. It’s a fascinating and timely conversation between two big-hearted leaders, fathers and friends.

Paul Rieckhoff (@PaulRieckhoff) is a renowned veterans activist who also takes you quickly through the latest headlines you need to know. From Trump’s controversial decision to attend the Veterans Day Parade in New York, to the impeachment hearings, to UFC 224, to the latest 2020 Presidential polling out of Iowa, Rieckhoff breaks down the news headlines that are important and inspiring with his uniquely edgy and independent style. Always with a special focus on national security and military and veterans affairs.

If you’re not angry, you’re not paying attention. But there are also good reasons to be happy and inspired. Download the new Angry Americans podcast for free here now. Then, join the Angry Americans newsletter to get free behind-the-scenes video of recent guests including Tulsi Gabbard, Samantha Bee, Marc Roberge, Chris Cuomo, Chef Tom Collichio and more.