33. David Bellavia. The Sole Living Medal of Honor Recipient of the Iraq War. Combat is Not Like The Movies. The Future of the Republican Party. Protesting Trump at the Veterans Day Parade. The Impeachment War Begins. 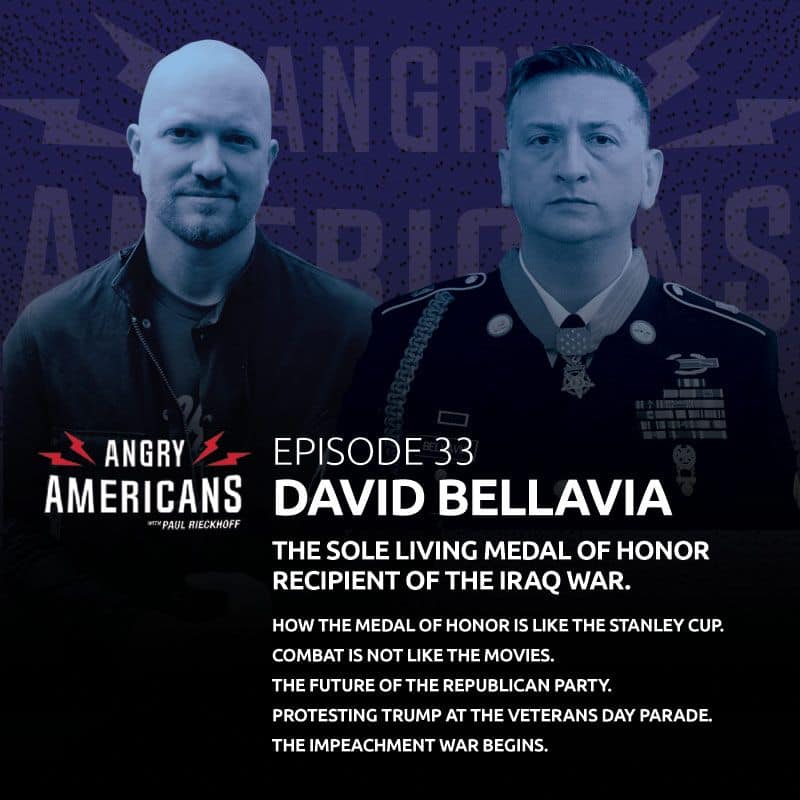 David Bellavia @DavidBellavia2 [54:17] is the sole living Congressional Medal of Honor Recipient to have served in the Iraq War. One fateful day in Iraq would forever change history. It also happened to be his birthday and the day before Veterans Day. On November 10, 2004, while serving as a squad leader in support of Operation Phantom Fury in Fallujah, David experienced brutal house-to-house and hand-to-hand combat that few can imagine. David demonstrated an exceptional level of valor that would have him recognized with America’s single highest award for heroism by President Trump in a ceremony earlier this summer at the White House. His memoir, House to House: An Epic Memoir of War was chosen as one of the top five best Iraq War memoirs by journalist Thomas Ricks and has been signed to become a major motion picture.

Bellavia is a hero, a leader, a father, an author and a tireless advocate for his country, his state, and the Army. And his story is now the stuff of legend. He’ll share it in raw, candid detail. He’ll also share what it’s like to shoulder the weight of the Medal of Honor under the bright lights of a national stage.

David has also been a combatant in the arena of American politics. He is a two-time Republican candidate for Congress, co-founder of the conservative political action group “Vets for Freedom”, host of a conservative radio talk show in Buffalo and a political ally of President Trump. At a recent White House event, Trump introduced Bellavia, and said “I heard you maybe are gonna be running for office, but someday I know, huh?” Trump continued, “I’ll tell ya, boy I’ll tell ya what, he has my vote. We’ll have a brave politician for a change, right?”

Our host, Paul Rieckhoff (@PaulRieckhoff) has known–and tangled with–Dave on issues for over a decade. They’ve disagreed on the Iraq war, foreign policy and domestic issues. But despite their differences, they have remained friends and share a mutual respect and a deep passion for driving support to our military and veterans community. It’s a no-bullshit, timely and feisty conversation between two influential leaders.

Paul is a combat veteran, author and renowned activist who has recently appeared on CNN, MSNBC, Pod Save America and more. He explains why he boycotted the recent Veterans Day Parade in NYC and takes Angry Americans (@AngryAmericans) entertainingly through the latest headlines you need to know about. From the start of impeachment hearings, to a wild week of football, to protests and division at the Veterans Day Parade in New York, to the latest 2020 Presidential drama, Rieckhoff breaks down the issues that are most important with a uniquely independent, inspiring and edgy style. Always with a special focus on national security and military and veterans affairs–and especially as conflict continues in Syria and Iraq during this Veterans Month.

This pod is possible thanks to support from Fort Hamilton Whiskey— A finely crafted American Rye whiskey born in Brooklyn, NY. Fort Hamilton is made purely from rye, malted barley, yeast and no nonsense. Celebrating revolutionary founding Father Alexander Hamilton’s Hearts of Oak Militia, they honor American bravery and you can too. Fort Hamilton Whiskey, join us in The Spirit of Revolution.