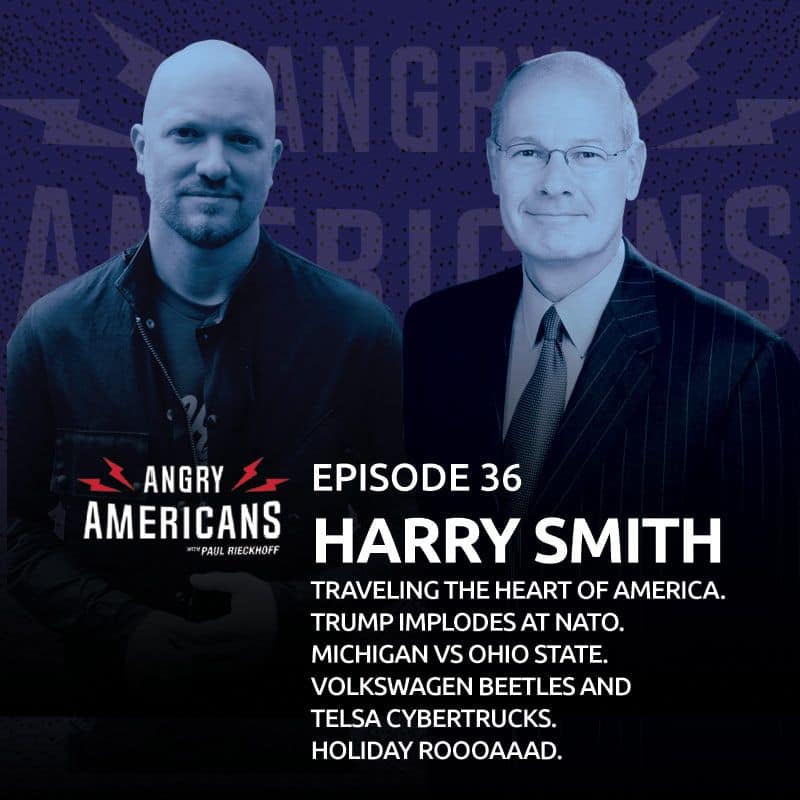 Harry Smith (@HarrySmith) [39:25] is an American media legend. The inspiring and beloved journalist has been a fixture in living rooms all across the country for decades. At NBC, CBS and A&E, Harry has told the stories of America. As the holiday season approaches, we’ll take a tour through the heart of our country with a wise and learned guide that’s driven the roads, climbed the mountains, rowed the rivers, and walked the trails.

Harry is a trusted voice for all Americans. But you’ve never heard him candid and uninterrupted by commercials like this. Harry man who has seen all 50 states and knows the inside of America better than almost anyone. He’s told the stories of Presidential candidates, poet laureates and parents who’ve lost children to the opioid epidemic. He understands politics, media, culture and life like very few. And he represents the very best of the spirit and heart of America. But like all of us, even Harry Smith is angry sometimes. He’ll tell you why. And he’ll share what makes him happy, his tips on succeeding in life, what he thinks of the presidential candidates, his first car and his favorite cocktail. Combat veteran, author and renowned activist Paul Rieckhoff (@PaulRieckhoff) is our host, has known Harry for over a decade and counts him as a friend and a mentor. He takes Angry Americans (@AngryAmericans) through the life of Harry Smith and through the latest news headlines with independence, speed and humor. And he’ll dig into Trump’s crazy trip to NATO, all the candidates dropping out of the 2020 race and the new Tesla electric pick-up truck.

This episode is supported by Fort Hamilton Whiskey. [106:25] A finely crafted American rye whiskey born in Brooklyn, NY, Fort Hamilton is made purely from rye, malted barley, yeast and no nonsense. Celebrating Alexander Hamilton’s Hearts of Oak Militia and the military base that bears his name, this patriotic whiskey honors American bravery and and celebrates the fighting spirit of Angry Americans. Fort Hamilton Whiskey is The Spirit of Revolution. And some damn good whiskey.

If you’re not angry, you’re not paying attention. But there are also good reasons to be happy and inspired. Download the new Angry Americans podcast for free here now. Then, join the Angry Americans newsletter to get free behind-the-scenes video of recent guests including Samantha Bee, Bob Woodruff, Bradley Whitford, Soledad O’Brien, Rachel Maddow, Ron Perman, Tulsi Gabbard and more.