47. Henry Rollins. The Age of Eventuality. The Full Rollins Origin Story. Trump is Punk Rock. Henry Breaks Down the Candidates. And, And, And. Bloomberg’s Big Surge. Here Comes Nevada. Rise Above, Rise Above. 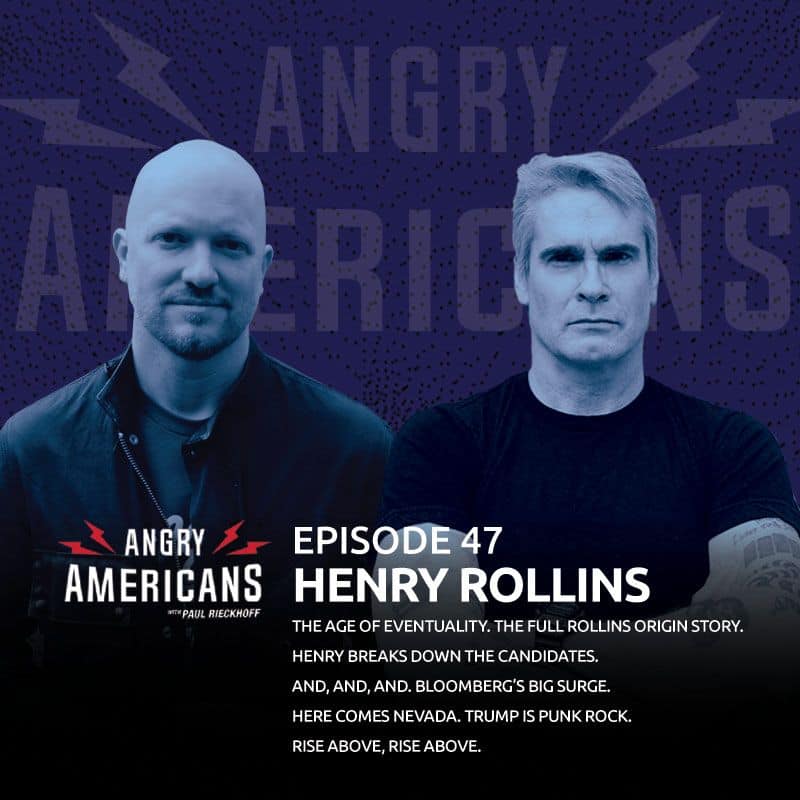 With America disrupted and divided like never before in our lifetime, what better time to sit down with the American icon, punk rock legend, thought-leader, author, political activist and spoken-word master, Henry Rollins (@HenryRollins). Henry is one of the most interesting, most experienced, most entertaining, most thought-provoking activists in the world. And a conscience for America.

[40:02] Henry Rollins has been a music and cultural innovator for three decades. From his early days as the front man for Black Flag and The Rollins Band, to films to TV to books to hosting his own radio and TV show, Henry is a voice of power, insight and clarity. He’s journeyed around the world as a curious traveller, a musician and and touring for his music and spoken word shows. He’s seen over 100 countries, been to war zones, won a Grammy, and acted alongside Al Pacino. He’s an activist for gay rights, freeing of the “West Memphis Three”, legalization of cannabis and has performed for US troops on USO tours in Djibouti, Kuwait, Iraq, Kyrgyzstan, Afghanistan (twice), Egypt, Turkey, Qatar, Honduras, Japan, Korea and the United Arab Emirates. If you love Henry Rollins, this will give you a fix like you’ve never had before. If you don’t know Henry Rollins, welcome to a ride you won’t forget. He’s a great American success story. And he’s known our host, Paul Rieckhoff (@PaulRieckhoff), for almost two decades. And before a live audience in Hollywood on Valentine’s Day, they candidly, rapid-fire rip through topics ranging from Henry’s epic breakout moment on a New York stage in 1981, to how technology is ruining dating to his analysis on all the leading candidates.