51. Colonel Myles B. Caggins III. The US Military Response to Coronavirus. How the Dept of Defense And Dept of Veterans Affairs Can Help Save Lives. Facing Rocket Attacks and COVID-19 in Iraq. Crisis Communication 101. Stay Frosty. 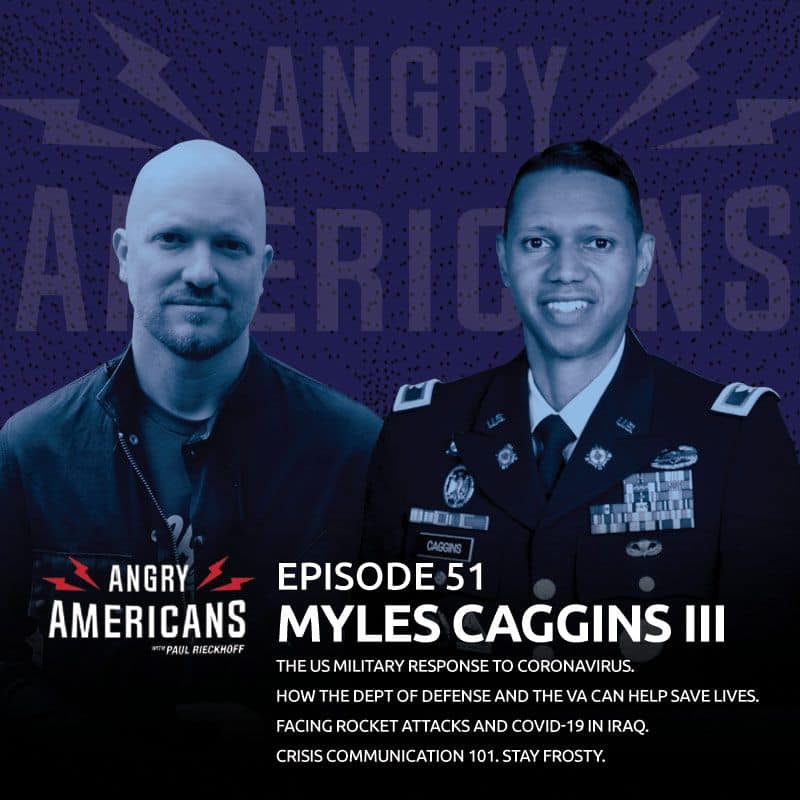 How is the US military tackling COVID-19? How are they testing our troops deployed in combat? As the pandemic hits, how can they care for the rest of us here at home? As the National Guard and Pentagon prepare to deploy people and assets nationwide to fight coronavirus, this important and inspiring guest will break it all down.

Host, activist and Iraq Veteran Paul Rieckhoff (@PaulRieckhoff) shares a fascinating and important conversation with US Army Col. Myles B. Caggins III (@OIRspox and @MylesCaggins) [45:30] who is currently forward-deployed in Baghdad, Iraq. Myles is Director of Public Affairs and Spokesperson for Combined Joint Task Force-Operation Inherent Resolve led by the U.S. Army’s III Corps. He leads military public communication for the 77-nation and five international organization Global Coalition to Defeat Daesh (ISIS) in Iraq and Syria. Myles has 23 years of military experience at tactical, operational, and strategic levels. From military posts, combat zones, the Pentagon, and White House, he has led communication strategy for some of the most challenging issues of the past decade, including: America’s rebalance to Asia and policy towards North Korea and China; the mission to defeat ISIS; Guantanamo; military human capital and recruiting; and nuclear security.

A leader deep in the fight on multiple fronts, he describes what life is like under threat of Iranian missile attacks and COVID-19. Myles represents the best of what our country is all about. He is a helper. And a leader who–like all our guests–has shaped what America was, what it is, and what it will be. He will give you valuable insight into how the military is facing down the coronavirus and enemy fighters at the same time. And how to face your own fears in the face of the pandemic.

Paul has known Col. Caggins for over a decade and guides a fascinating and exceptionally timely conversation with a leader direct from the front lines overseas. Rieckhoff also digs into the most important news, politics and culture of the time. From Super Tuesday 3 to the VA response to coronavirus to naming the 8 US Senators who voted against the Senate bill to provide Americans with emergency support, it’s a fresh and entertaining recap of what you need to know. And as with every episode of Angry Americans, this show is about action. Rieckhoff suggests an impactful way to turn your righteous anger into positive impact. It’s a uniquely compelling, shareable episode of the pod that’s been on the top of the news and political podcast charts and featured in Variety, NPR, The New York Times.

This episode is possible thanks to support from our friends at Bravo Sierra. Bravo Sierra believes the U.S. military established the original wellness lifestyle – optimized physical and mental fitness, founded on a unifying ethos of respect, service and integrity. Bravo Sierra (@BravoSierra_USA) develops critical innovation performance products in direct collaboration with those that deserve it most – our active duty service members. Bravo Sierra has pioneered a business model that directly contributes 5% of all sales to Morale, Welfare and Recreation (MWR) programs dedicated to the well-being of U.S. service members, veterans and their families.