55. Jeffrey Wright. Westworld and COVID19. Fighting the Virus in Brooklyn. Rallying for Restaurants. Ebola in Sierra Leone. The Slave Behind Jack Daniels Whiskey. Trump vs The WHO. Stupid Hits South Dakota. The VA Secretary is MIA. #StayFrosty 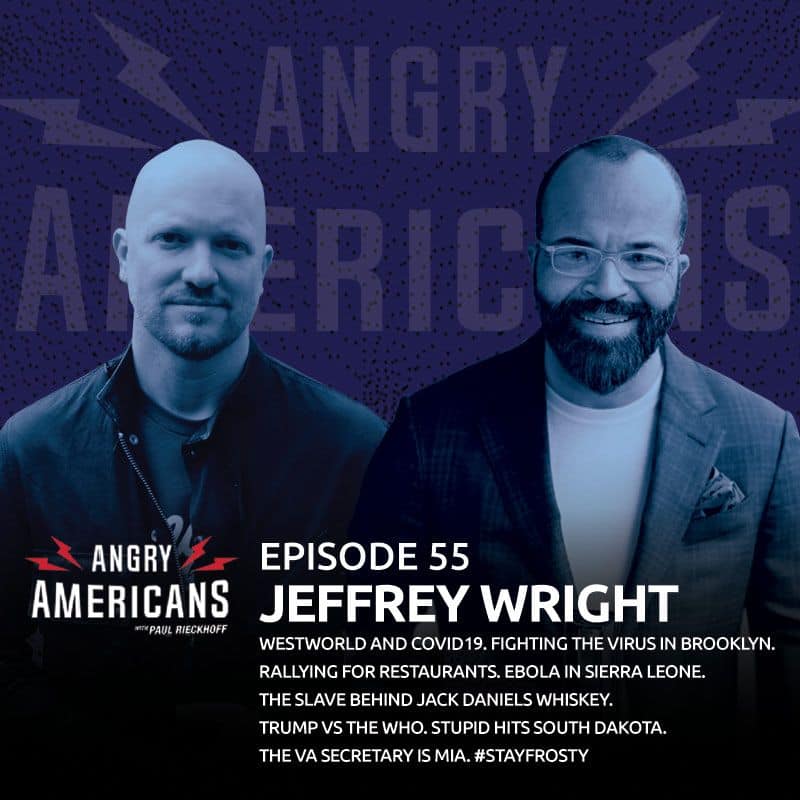 Jeffrey Wright [50:40] is one of the finest actors in the world. He’s also one of the most tenacious activists. He’s a patriot. He’s an organizer. He’s a voice for the voiceless. He’s a powerful critic of Donald Trump. And he’s deep in the fight vs the coronavirus right now.

From Angels in America to Basquiat to Syriana to Casino Royale to The Hunger Games to Boardwalk Empire to Classical Baby to Westworld. Jeffrey Wright (@JFreeWright) has played Martin Luther King Jr. and Colin Powell. He’s played artists and scientists. And he’s everyone’s favorite Host, Bernard Lowe. He’s won a Golden Globe, an Emmy, a Tony. And he’s a driven supporter of causes ranging from veterans with mental health injuries to miners in Sierra Leone.

And as the war against the coronavirus expands, Jeffrey Wright is a critical global face for two prongs of our collective experience. His neighborhood in Brooklyn is being hammered by sickness and death. Sirens are wailing constantly outside his home. And he’s using his unique talents to rally support for his community through a bold new effort called #BrooklynForLife! At the same time, the HBO show he stars in is at the top of the world’s stay-at-home binge list. Westworld is a global phenomenon–giving so many of us a break from the non-stop news cycle around the coronavirus. But also providing a warning about our weaknesses and painting a picture of a dystopian potential future. It’s a candid, inspiring, unpredictable and extended conversation–with one of the most recognized faces on the planet. You’ll hear sides of Jeffrey Wright you’ve never heard before. His thoughts as a father, his experience in Africa fighting another deadly virus, his thoughts on potential VP options for Biden, his stories of glory as a college lacrosse star–and you’ll even meet his pet turtles.

And as the stupid continues to spread faster across American even faster than the virus, independent activist @PaulRieckhoff breaks it all down with this trademark insight, wit and candor. He rips into how a skyrocketing number of veterans are dying from COVID19 at the Department of Veterans Affairs, the Pentagon’s struggles to contain outbreaks, a flood of anti-lock-down state capitol protests, and the line of endorsements coming to Joe Biden.

Every episode of Angry Americans creates ways for you to turn your righteous anger into positive impact. In this pod, it’s supporting Jeffrey Wright’s Brooklyn For Life! team on the front lines of helping healthcare heroes and businesses at a local level. And friend of the pod Tom Collichio’s (@TomColicchio) Independent Restaurant Coalition (IRC) at the national level. Tom joined us on the pod back in Episode 8 and is continuing his important activism. It’s a powerful episode of the show that’s been featured in Variety, NPR, The New York Times, MSNBC and CNN.

For video of the conversation in this episode with Jeffrey Wright –and for past conversations with Rachel Maddow, Chris Cuomo, Rosie Perez, Henry Rollins, Meghan McCain, Mayor Pete Buttigieg, Samantha Bee and more– join the Angry Americans community now. Angry Americans is connecting, uniting and empowering people nationwide–and is powered by Righteous Media.