64. Ron Perlman. EXCLUSIVE: The Man Who Stomped Ted Cruz & Matt Gaetz on Twitter. Trump vs the Generals. Atlanta Cops Charged in Rayshard Brooks Case. The George Floyd Murder is the My Lai of Policing. Father’s Day in a Pandemic. 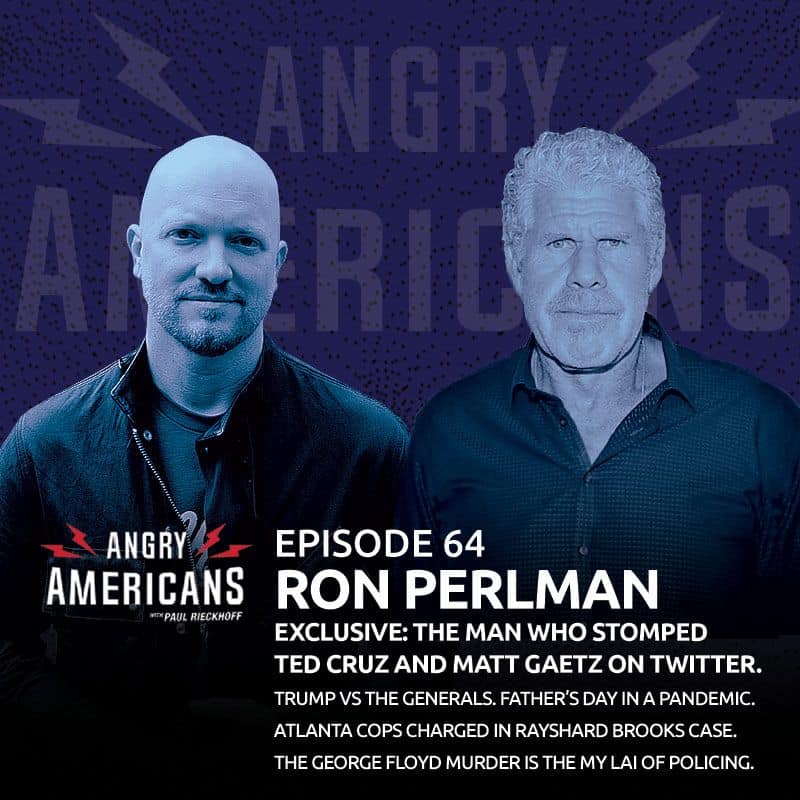 If you’re not angry, you’re not paying attention. And actor and activist Ron Perlman (@perlmutations) is understandably angry. [1:02:35] Ron is known and loved worldwide for his popular roles in Sons of Anarchy, Hellboy, Beauty and the Beast and more. But he’s never had an audience like the one that watched his fiery and personal Twitter fight with Florida Congressman Matt Gaetz and Texas Senator Ted Cruz this weekend. It got nasty, it got personal, and it got attention around the globe. Ron was one of the pods’ very first guests and returns to Angry Americans to take us exclusively behind the scenes of a wild weekend that had him trending on Twitter, challenged to a wrestling match with a Congressman, and making political headlines nationwide. Ron pulls no punches and gives us a fascinating insight into the bizarre, bareknuckle intersection of Twitter, politics, Trump, Hollywood, activism, and celebrity.

In this episode, we connect with another activist on the frontlines of our unfolding political battlefields. Ron Perlman is a man in the modern political arena, throwing punches with a United States Senator for all the world to see. Ron also chops it up with Paul about Black Lives Matter, what shows he’s been binging during the pandemic, and his favorite band of all time. It’s a raucous and fun conversation with one of the most controversial and entertaining voices in America.

And fresh off a round of national media appearances, Army veteran and renowned activist Paul Rieckhoff breaks down Trump’s escalating war with high-profile retired Generals like James Mattis, David Petreaus, Colin Powell and Martin Dempsey and his unprecedented speech at West Point’s graduation. He’s got the latest news you need to know that has him angry, has others angry, and should have everyone angry.

It’s another episode of THE podcast for independent American politics, news and culture. The influence and audience of Angry Americans continues to grow and has been featured on CNN, MSNBC, Fox News, Variety, NPR, The New York Times and SiriusXM.

You can support speaking truth to power and get unique access to Paul Rieckhoff, our guests, special offers and behind-the-scenes content by joining the powerful Angry Americans community on Patreon. Patreon membership gets you first looks at guests and chances to meet friends of the pod like Henry Rollins, Ambassador Susan Rice, Meghan McCain and Mayor Pete Buttigieg. And joining also helps support critical and patriotic independent media at an essential time.

This powerful episode is supported by BRAVO SIERRA. Perfect for Father’s Day, BRAVO SIERRA (@BravoSierra_USA) is the military-native performance wellness company built for every lifestyle. BRAVO SIERRA delivers high-quality grooming essentials formulated with clean ingredients made-in-the-USA. And BRAVO SIERRA always gives back to America’s heroes. 5% of all sales support programs for service members, veterans and families. Visit www.BravoSierra.com/AngryAmericans now to get a FREE trial set now. Angry Americans friends can use the discount code ANGRY at checkout for 15% off all orders.