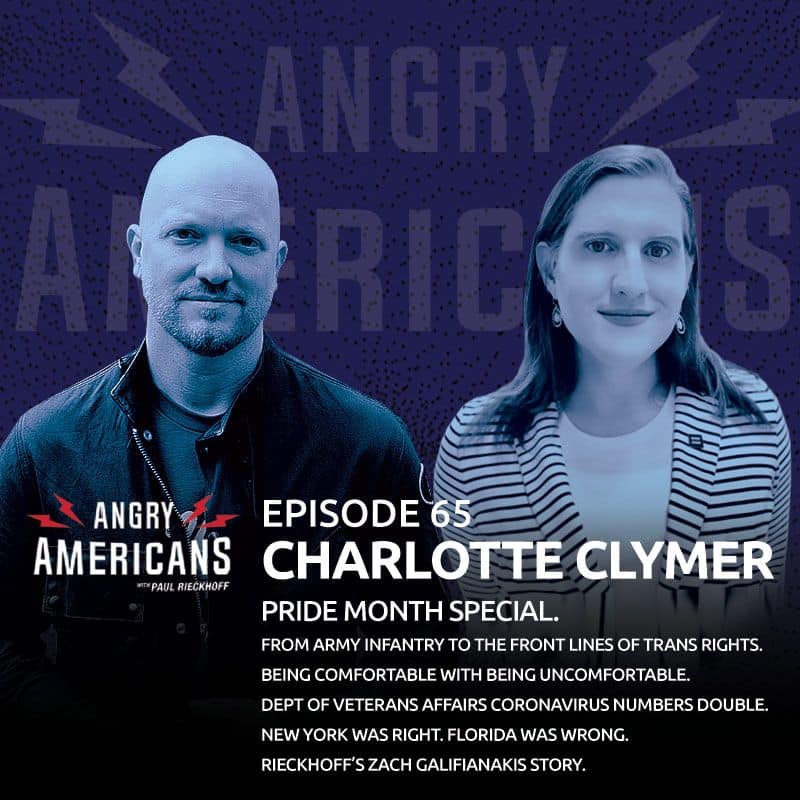 Charlotte Clymer (@CMClymer) is a fighter. [1:23:12] An Army veteran and one of the most influential trans activists in the world, she’s gone from from a trailer park in Texas, to Army Infantry Basic Training at Fort Benning, to advocating for transgender people worldwide. Charlotte fights for herself and for others. Tough, patriotic and sharp, she burst onto the political scene in 2018 after being denied access to a Washington, DC restaurant bathroom. A dynamic powerhouse on Twitter, the former Press Secretary at the largest and most powerful LGBTQ organization in the country (HRC–Human Rights Campaign), Charlotte has written for Glamour, Vice, NBC and been a commentator on CBS News Sunday Morning. As a soldier, Charlotte carried the caskets of Americans killed in action. As an activist, she’s carried the stories of countless unheard voices. This Pride month, and in the wake of the historic Supreme Court decision protecting LGBTQ employees from discrimination based on sex, Charlotte takes us inside the life of a front-line fighter deep in the most critical fights of our time. She breaks down Trump’s politicization of the military, the Pentagon’s transban, why Mayor Pete Buttigieg’s campaign was historic, her favorite drink, if she’ll go back in the Army and whether she’ll run against Senator Ted Cruz back home in Texas.

Following our most popular episode ever with actor and activist Ron Perlman, Angry Americans host Paul Rieckhoff (@PaulRieckhoff) leads a powerful conversation with another important, inspiring and iconic American changing the face of America’s past, present and future. And, he blazes through the news you need to know about–as always with a special focus on national security, veterans and first-responder issues. From the explosion of coronavirus cases inside the Department of Veterans Affairs, to chaos inside the Pentagon, to the protests and pandemic spreading nationwide, Rieckhoff breaks it down with fire, wit and independence.

It’s an important and inspiring Pride month special episode of THE podcast for independent American politics, news and culture. Angry Americans has been featured on CNN, MSNBC, Fox News, Variety, NPR, The New York Times and SiriusXM–as our audience and impact continues to grow fast.

You can join the powerful Angry Americans community now on Patreon to support this vital independent voice speaking truth to power. You’ll also get unique access to Paul Rieckhoff, our inspiring guests, cool gear and unique content not available anywhere else. Patreon members also get chances to interact directly with friends of the pod like Henry Rollins, Ambassador Susan Rice, Meghan McCain and Mayor Pete Buttigieg.

This episode is supported by BRAVO SIERRA. As July 4th approaches, BRAVO SIERRA (@BravoSierra_USA) is the military-native performance wellness company built for every lifestyle. BRAVO SIERRA delivers high-quality grooming essentials formulated with clean ingredients that are made-in-the-USA. BRAVO SIERRA also always gives back to America’s heroes. 5% of all sales support programs for service members, veterans and families. Check out www.BravoSierra.com/AngryAmericans to get a FREE trial set now. The discount code ANGRY gets Angry Americans 15% off all orders at check out.

If you’re not angry, you’re not paying attention. Angry Americans is empowering independent Americans everywhere and powered by Righteous Media.