70. Montel Williams. The TV Icon and Decorated Veteran on Fighting MS, Trump and Stupidity. Leading on Cannabis Reform. America’s Lack of Discipline. The Wall of Vets. Baseball Bumbles The Reopening. 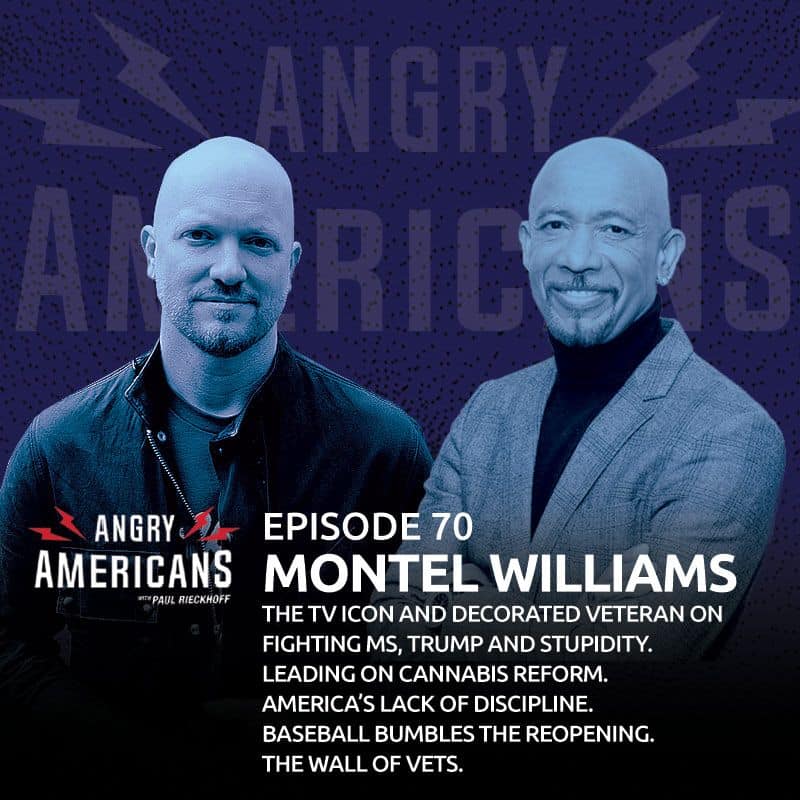 Trump still refuses to address Russia paying bounties to kill American troops, the pandemic continues to spread across the military and veterans community especially, baseball has shut down right after opening day, and schools nationwide are in limbo. If you’re not angry, you’re not paying attention. Independent activist, Army veteran and renowned social entrepreneur Paul Rieckhoff (@PaulRieckhoff) is our host–and he breaks it down with ferocity, fire and fun. It’s another powerful episode of Angry Americans—the best weekly podcast in America for independent politics, news and culture.

This pod also features a fascinating conversation with Emmy Award winning TV host and Navy and Marine Corps veteran, Montel Williams (@Montel_Williams). [1:05:20] This is the 17-year host of The Montel Williams Show and now Let’s Be Blunt with Montel like you’ve never heard him before. The political independent is an outspoken patriot, an activist and an entrepreneur. Montel is a survivor of multiple sclerosis, who recently overcame a life-threatening stroke. He’s a passionate advocate for cannabis reform, MS and veterans, and an entreprenuer who has lived a rich and fascinating life. And he is very fired up about the state of affairs in America. For decades, Montel was one of the most well-known African-American hosts on television and he sounds off on Black Lives Matter, Trump and what he sees as the most urgent threats to our national security. It’s an inspiring, candid and informative conversation with a leader who pulls no punches.

Angry Americans continues to top podcast charts worldwide and make news on CNN, MSNBC, and others. It’s your trusted place for a weekly breakdown of the news and a strong dose of inspiring content to guide you through these precarious times.

Visit the Righteous Media YouTube page and follow Angry Americans on Instagram, Facebook and Twitter for video of this exclusive conversation with Montel Williams and video of all our dynamic, recent guests ranging from Willie Geist to Sam Bee to Rosie Perez. Join the exclusive Angry Americans community on Patreon to support this critical, independent media voice that speaks truth to power. You also get unique access to Paul Rieckhoff and our inspiring guests, and discounts on merch and special content not available anywhere else. Patreon members also get to meet influential friends of the pod like Susan Rice, Mayor Pete Buttigieg, Meghan McCain and Henry Rollins. Whether you’re a Republican, Democrat or independent, this is your new favorite weekly podcast for politics and news. Don’t just be angry, be active. Join the movement.