76. Jason Dempsey, PhD. Trump Calls Troops “Losers” and “Suckers.” Will The Military Save Us? Generals Mattis and Kelly Are Complicit. The 19th Anniversary of 9/11. The Best Peeps Answer Ever. 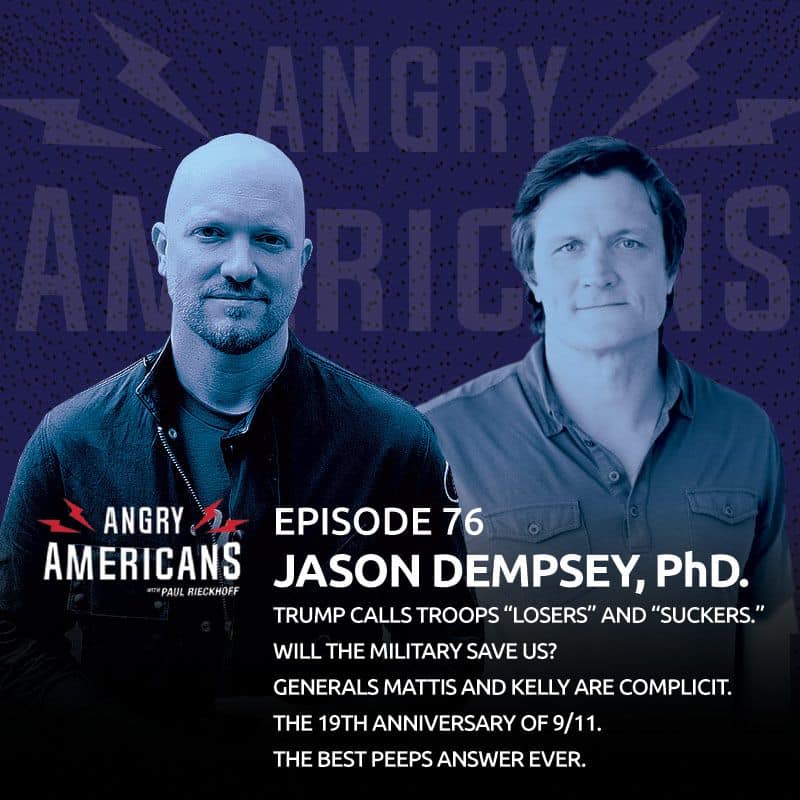 Trump has been caught by his own words. Demeaning the military, disrespecting our Generals, downplaying the virus, and lying to the American people. But what happens now? How is the Pentagon reacting? Will this moment be his Waterloo? Can President Mayhem survive the onslaught of bad news–especially when so much of it is focused on his fractured relationship with the military he commands? Nobody is in a better position to break it down than our host, Paul Rieckhoff (@PaulRieckhoff). Fresh off a massive week of media hits in places like Morning Joe, Deadline White House and the BBC, Rieckhoff breaks it down as only he can. He’s a nationally-recognized expert on the intersection of our military and our politics and a 9/11 First Responder himself, who always has his ear to the ground. He’ll also take you behind the scenes inside the bizarre world of politics, media and the military and explain whether or not this will fade, how it’s impacting our national security, and whether or not it will mean the difference in the most important election of our time.

And Rieckhoff brings in a very special guest who knows these issues better than anyone in America. Jason Dempsey (@Jason_K_Dempsey) [15:00] is a bad-ass warrior-scholar. A former Army infantryman with a PhD in politics who loves beer and bikes. A professor, author, researcher, combat veteran and one of the country’s foremost experts on civil-military relations, Jason is West Point graduate, a PhD, and Adjunct Senior Fellow of the Military, Veterans, and Society Program at the Center for a New American Security (CNAS) and a powerful voice that must be heard. He led units on the ground in Afghanistan, served inside the White House, and literally wrote the book on the modern United states military: Our Army: Soldiers, Politics, and American Civil-Military Relations. He’s also a dad, a lover of good beer and no-BS guy who pulls no punches.

It’s a hard-hitting and exceptionally timely episode of Angry Americans—the hottest weekly podcast in America for independent politics, news and culture. The show that continues to make news and get highlighted on CNN, MSNBC, and more.

If you’re not angry now, you’re not paying attention. Especially now. But as always, this podcast isn’t just about being angry. It’s also about being active. And turning your emotion into positive impact. Join the Angry Americans community on Patreon now to get special inside access to our host, Paul Rieckhoff, our dynamic guests, and discounts on Angry Americans merch and special content not available anywhere else. You will also support this critical, independent media voice that speaks truth to power. With a unique focus on veterans, national security, and first-responders issues–not just on 9/11.