84. Molly McKew. Biden Beating Trump. Russians Are Attacking Our Election Right Now. How You Can Defend America From Misinformation. Wizard Spider, The Trickboy Botnet and Other Scarily-Named Bad Guys. Why You Should Delete Zoom. Yesper On The Edge. 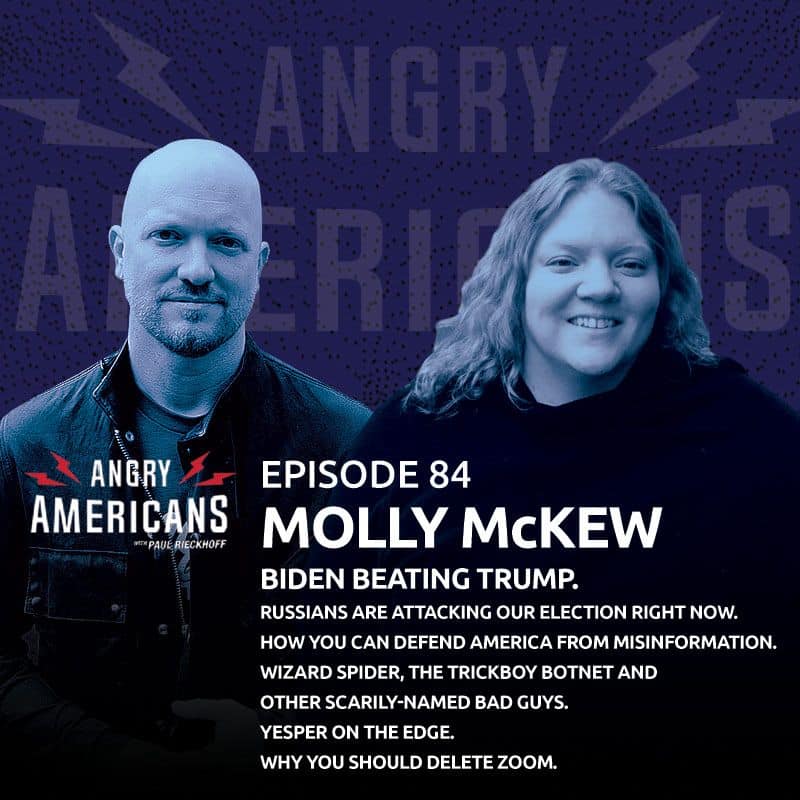 “We expect panic,” that’s what a Russian hacker involved in attacks on America is predicting.

As Election results unfold all across our political battlefield, there’s a massive war happening nationwide that most Americans can’t see. Hackers, cyber terrorists and information warriors from Russia and around the world are taking shots at your election machines, your electrical grid, your hospital and your laptop. Right now, as the heat in America continues to rise, our enemies are strategically starting fires and adding gasoline all across the web. From your local election system, to your Facebook page, to the hospital you depend on for COVID care, to Donald Trump’s iPhone. America’s enemies are waging a complex and expansive war against you and everyone else in America as you read this. And it won’t stop when the election is called. It will expand. The misinformation and cyber threats facing America have never been greater. And we’ve never been more fragile. Independent host Paul Rieckhoff guides you through it–and breaks down the election results with a special focus on national security.

As cyber threats swirl all around us, our guest is a guardian on the watchtower: information warfare and Russian influence expert, Molly McKew. [21:50] McKew has traveled the world studying, analyzing and advising on the most urgent cybersecurity, misinformation and technology-based threats. An adjunct professor at Georgetown University’s Edmund Walsh School of Foreign Service, McKew teaches Russian hybrid warfare. She also serves on the board of the Stand Up Republic Foundation as an advisor on countering disinformation, lead author of the Defusing Disinfo blog, and the creator of Great Power–a guide to asymmetric conflict like cyber, information, and economic warfare. McKew graduated from Stanford with a BA in Russian Language, History, and Culture, and the London School of Economics with an MSc in Russian/Post-Soviet Studies. She was awarded the Order of Honor by the President of Georgia for her service in defense of Georgian democracy.

The future is here. It’s fascinating. And it’s dangerous. McKew is a thoughtful, sharp, experienced voice to break down how attacks and bad actors are impacting our elections now. And how they might impact you and your family in the days to come. She’s also got incredible stories from her journey’s around the world, a special sword on her wall, and a fun favorite drink answer. It’s a must-listen Angry Americans episode that will prepare you for the precarious days ahead after the most turbulent election ever.

If you’re not angry, you’re not paying attention. Especially now. In times of crisis, Angry Americans is your trusted source for independent news, politics and inspiration. It’s a unique, fun and hard-hitting perspective like nowhere else in the media. You’ll learn from influential guests in candid and entertaining ways you won’t on any other show. And Rieckhoff rips into the news headlines in a way that will leave you grounded, prepared and inspired.

Join our Angry Americans Patreon community and get unique access to Rieckhoff, our dynamic guests, cool merch, and exclusive content. This show is possible thanks to these Patreon members and support from Uncle Nearest Premium Whiskey.

Join the movement at AngryAmericans.us or YouTube. You can see this conversation with Molly McKew and other political, foreign policy, national security and media players ranging from Stephen Colbert to Jeffrey Wright to Meghan McCain to Mayor Pete Buttigieg to Susan Rice to Sarah Jessica Parker. It’s political, social and industry diversity you can’t find on any other show in America.