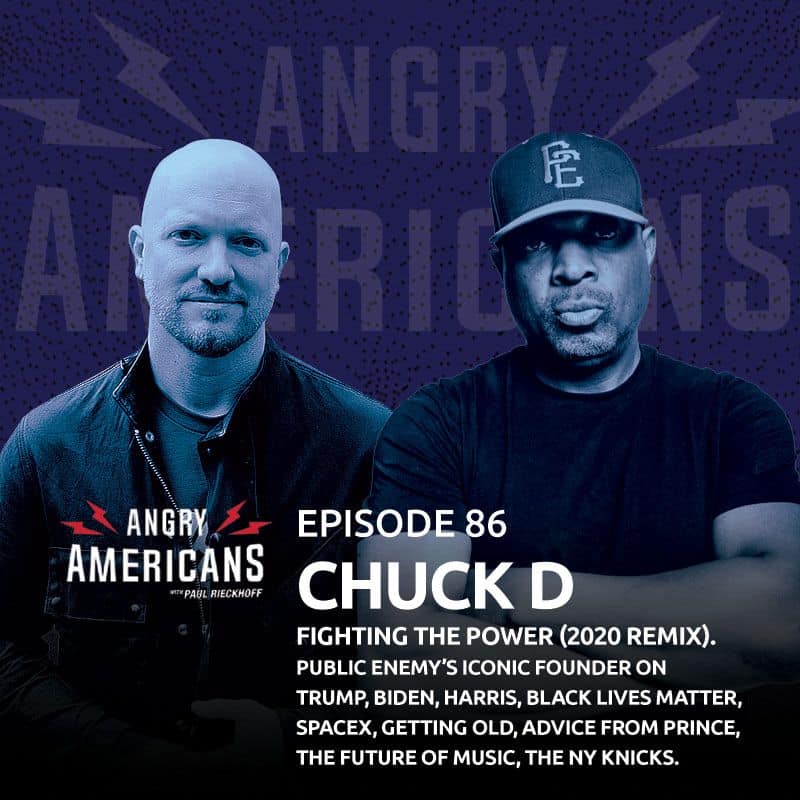 As America faces power fights like we’ve never seen before, the legendary founder of Public Enemy joins us to explore and explain fighting the power: 2020 style. This is Chuck D–a voice of consciousness, outrage, inspiration and action for over 35 years—unplugged and uninterrupted. Just when our country needs it the most.

Chuck D (@MisterChuckD) [35:37] is one of the most iconic and important American artists of the last century. He’s an activist, organizer, inspiration, and the ultimate angry American. He’s testified before Congress, co-hosted a political radio show with The Daily Show Founder, Liz Winstead and MSNBC’s Rachel Maddow, and collaborated with artists ranging from Prince, to Anthrax, to Sonic Youth, to Rage Against the Machine, to Gary Clark Jr., to Logic, to Sheryl Crow.

Chuck is the powerful, driving force behind arguably the most disruptive hip hop group in history. Born in the intersection of culture and politics, the hip hop trailblazers have interpreted the righteous anger of millions worldwide for decades. In the late 80s and early 90s, their first four albums went gold or platinum. They were inducted into the Rock and Roll Hall of Fame and honored this year with a Grammy Lifetime Achievement Award.

Our host, Paul Rieckhoff (@PaulRieckhoff), and Chuck have been friends for almost two decades. And this is Chuck from inside his home, raw, candid, and without commercial interruption. Chuck and Rieckhoff know how to throw punches. And their conversation will give you advice on fighting the power (and living life) that will leave you inspired for the tough fights ahead.

Chuck is a real and fascinating creative mind that breaks down the results of the election, sizes up Joe Biden and Donald Trump, and offers analysis on why New Yorkers (and Trump) are uniquely powerful right now. If you’re not angry, you’re not paying attention. And few artists in American history have been more angry than Chuck D. But more than almost anyone else, Chuck’s work and life is a demonstration in how to turn that anger into positive impact, and history-making art. Chuck is a perfect guest for these times–and this is an essential episode.

And Rieckhoff rips into the issues and headlines you need to know about–from the deepening partisan divide in America, to the chaos at the Pentagon, to Trump’s assault on the election results, to the pandemic’s hidden impact on the military and veterans. Most podcasts simply break down what happened. Angry Americans will prepare you for what happens next.

Angry Americans is your trusted, independent source for news, politics, culture and inspiration. It’s a smart, fun and no-BS perspective like nowhere else in the media. You’ll meet powerful, inspiring iconic guests in raw conversations and join a unique and powerful community.

You can join us for an exclusive Cocktail Hour Zoom if you become part of the Angry Americans Patreon community. You’ll also get unique access to our amazing guests, our dynamic host, merch discounts, and exclusive content. Angry Americans is possible thanks to these Patreon supporters and Uncle Nearest Premium Whiskey.

You can also watch this conversation with Chuck D and a wide range of music, political, business and media players ranging from Jeffrey Wright to Susan Rice to Sarah Jessica Parker to Stephen Colbert to Meghan McCain to Mayor Pete Buttigieg on the Righteous Media YouTube page. It’s political, social and industry diversity like no other show in America.