88. Dr. Paul Haser. Winter is Here. Inside an Emergency Room Fighting the Virus. COVID is Like Glitter. New York: From the Pearl Harbor of the American Pandemic to Occupied France. Trump Vetoing the Defense Budget. Pentagon Purge Continues. 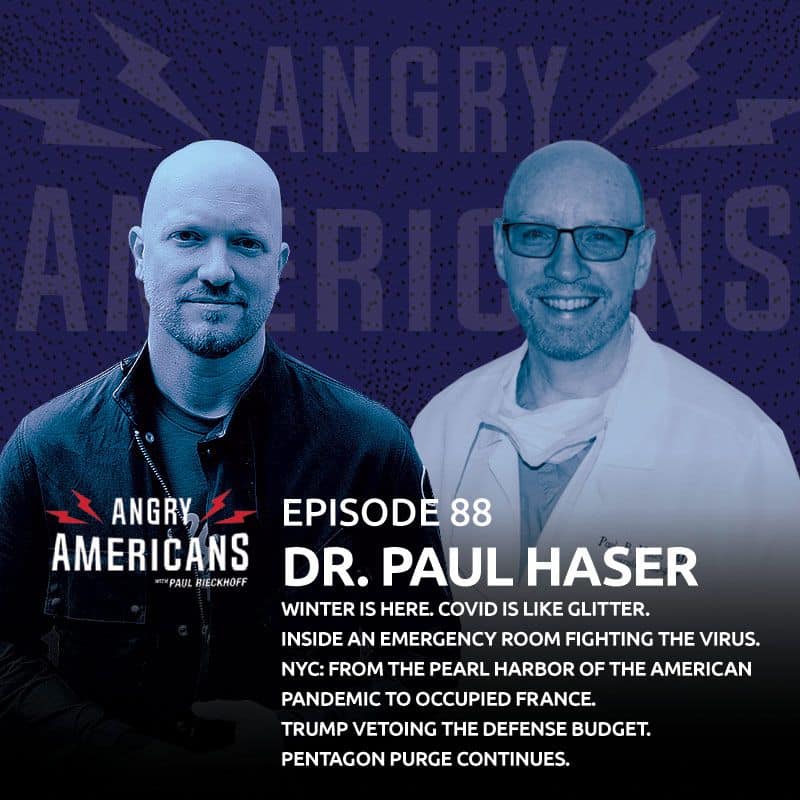 Winter is here. And we’ve got one last very hard month of 2020. But as the weather turns cold, our country is burning with the virus. With the pandemic surging nationwide, our independent host, Paul Rieckhoff (@PaulRieckhoff) breaks it down and rips into the most under-reported story in America: Trump’s ongoing purge of the Pentagon. Our national security is under attack from within. Trump’s hidden war against our warriors–and our Department of War–is escalating. Another top Pentagon official is out: this time the Director of the Pentagon’s Defeat-ISIS Task Force. And our lame-duck Commander-in-Chief is now threatening to veto the defense budget–an urgent, annual bi-partisan budget that has passed for the last 59 years. All this while the Defense Department prepares to help deliver the coronavirus vaccine nationwide–and as the pandemic hits our veterans especially hard.

We need a doctor to help us understand what’s really happening. In this urgent episode, we talk with one of the bravest doctors in one of the hardest hit hospitals. A hero who has been fighting the virus and saving lives non-stop since the earliest days of the pandemic.

Dr. Paul Haser [22:44] is a brilliant and heroic emergency surgeon at Brookdale Hospital Medical Center in Brooklyn, New York–a front line in our war against the coronavirus. In the past, Paul volunteered as a surgeon in Haiti after the catastrophic earthquake and served at Landstuhl Regional Medical Center in Germany–the only forward-stationed medical center for U.S. and Coalition forces–treating combat injuries. Now, Paul’s hospital is a critical battle field in the war against the virus. In March, it was a beachhead. It was our Pearl Harbor–the first place to get hit by the virus. Now, as the virus has consumed our entire country, that beachhead has become occupied territory. If Brooklyn was once Pearl Harbor. Now, it’s occupied France. And Dr Paul Haser is leading the resistance. He’s an important and inspiring American leader that can break down this moment and leave you informed and inspired.

If you’re not angry, you’re not paying attention. Angry Americans remains your trusted, independent source for news, politics, culture and inspiration. It’s a smart, fun and no-BS perspective like nowhere else in the media.

You can also watch video of this conversation with Dr Haser and an incredible range of music, political, business and media players from Rachel Maddow to Chuck D to Jeffrey Wright to Medal of Honor Recipient Flo Groberg to Sarah Jessica Parker to Stephen Colbert to Meghan McCain to Mayor Pete Buttigieg on the Righteous Media YouTube page. It’s political, social and industry diversity like no other show in America.

Join us for an exclusive Angry Americans Cocktail Hour Zoom on December 7th by becoming a member of the Angry Americans Patreon community. You’ll also get unique access to our amazing guests, our dynamic host, merch discounts, and exclusive content. Angry Americans is possible thanks to our Patreon supporters, Uncle Nearest Premium Whiskey and Tommy John.