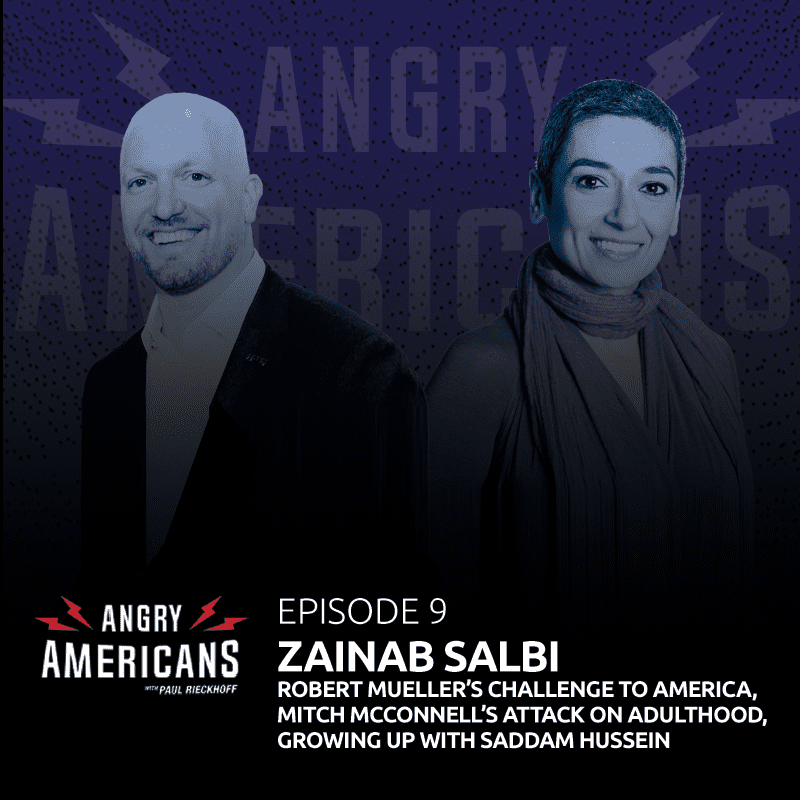 Zainab Salbi (@ZainabSalbi) is a survivor of war, a humanitarian trailblazer and an inspiration to millions worldwide. The world-renowned activist, author and thought-leader has appeared on Oprah ten times–and now joins Angry Americans and Paul Rieckhoff (@PaulRieckhoff) for a stirring conversation about humanity, surviving adversity and the precarious state of the world.

Raised in Baghdad, Iraq, Zainab grew up as a small girl calling Saddam Hussein her uncle. Her father was Hussein’s private pilot and from an early age, Zainab was thrust into the small and twisted circle of the notorious dictator. She takes us inside that bizarre world and shares how she survived it, and escaped war, brutality and abuse to emerge as a true American imigration success story. She escaped an abusive arranged marriage with only $400 in her pocket and would go from working in a Hallmark store in Chicago to founding a global non-profit for women to receiving honors from the President of the United States at the White House. She now is a best-selling author and one of the most powerful Muslim-American voices in media and politics.

It’s a harrowing, inspiring and thought-provoking conversation with another iconic, important and inspiring American that is shaping what our country is and what it will be in the future. The kind of interview that is defining Angry Americans.

Rieckhoff also tears into a radical new piece of legislation proposed by Senate Majority Leader Mitch McConnell that would raise the legal age of tobacco consumption to 21 years old–with no exemption for the military.

It’s the latest episode of the groundbreaking new political podcast that was featured last week on CNN’s Reliable Sources and MSNBC’s Morning Joe. Listen now and step inside the innovative and entertaining show that takes you behind media, politics and change-making at the highest levels.

Check out our friends at Oscar Mike. Oscar Mike is apparel with a mission. Troop Tested, Athlete Approved, American Made. Oscar Mike is the exclusive provider of the awesomely comfortable and inspiring Angry Americans t-shirts worn by Paul Rieckhoff, Ron Perlman, Rachel Maddow and other recent guests and fans of the show nationwide.