82. Chuck Hagel. The Former Sec. of Defense on Trump, His Relationship with Biden, American Leadership in Crisis, the Future of Independent Politics, the Debate, and Epic Halloween Costumes. From Wounded Army Private in Vietnam to Leading the Pentagon. 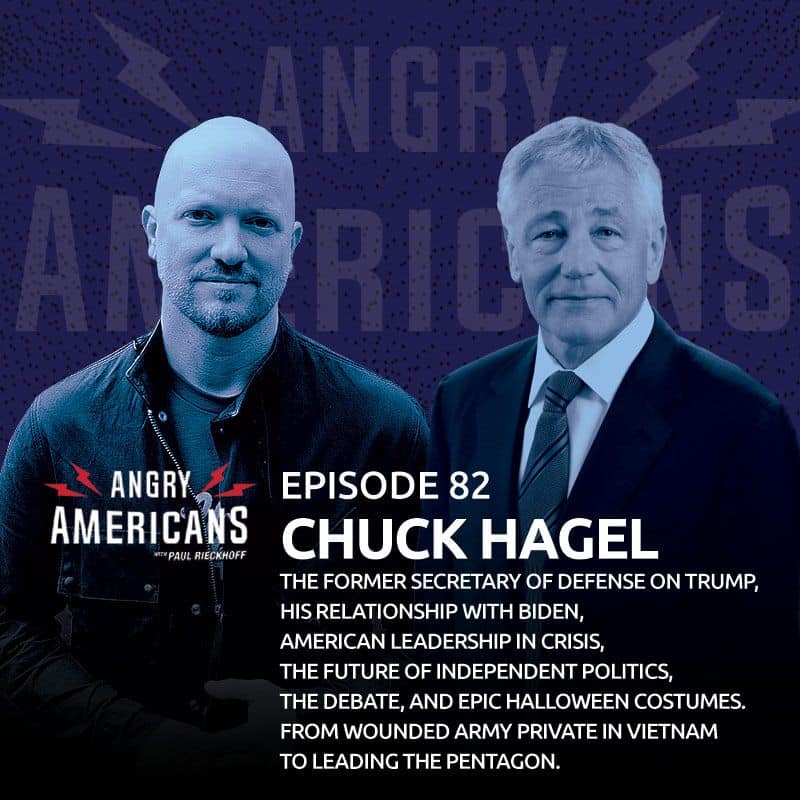 “We are solvers of problems–as Americans.” -Chuck Hagel.

These are tough times in America. And it’s time to listen to our toughest leaders. Leaders like Chuck Hagel.

Chuck Hagel [13:26] is a true American success story–and has been an independent voice of reason on our political landscape for a generation. Hagel served as the 24th Secretary of Defense from February 2013 to February 2015. He was a rare Republican in the Cabinet of President Obama and the first Vietnam veteran and first formerly enlisted soldier in American history to lead the Pentagon.

America is being tested from every side–and from within. From attacks on our elections, to attacks on our troops in Afghanistan, to attacks on Pentagon leadership by our own President. And this week, Foreign Policy takes center stage in the final Presidential Debate between Trump and Biden. Hagel breaks down how and if our military, foreign policy and political leadership is or isn’t ready for what’s to come. In this candid, personal and insightful conversation with our host, Army veteran and Founder of Iraq and Afghanistan Veterans of America (IAVA), Paul Rieckhoff (@PaulRieckhoff), Hagel shares insight into the Joe Biden he’s known for decades, the Donald Trump he’s seen up close, and the future he sees for America. It’s real and sobering–and also warm and uplifting.

Hagel previously served in the United States Senate representing Nebraska, was President of the World USO, and in the mid-1980’s after returning from Vietnam, co-founded VANGUARD a highly-successful, publicly-traded corporation. He is also the author of, America: Our Next Chapter and the subject of a book entitled, Chuck Hagel: Moving Forward.

Hagel is a statesman, an entrepreneur, a grandfather, and always a patriot. And he is now a leader of National Security Leaders for Biden–a group of 780 retired Generals, Admirals, Senior Enlisted, Ambassadors and former Senior National Security Officials supporting Joe Biden for President. He’s gone against his own political party, conventional wisdom and our enemies for decades. Now, he’s fighting against Trump.

This election season especially, Angry Americans is your oasis for independent news, politics and inspiration. The pod always delivers a unique, independent and hard-hitting perspective like nowhere else in the media. You’ll hear influential, fascinating guests like Chuck Hagel open up in ways like they don’t on any other show. And Rieckhoff breaks down our times like nobody else can.

If you’re not angry, you’re not paying attention. Especially right now. Join our Angry Americans Patreon community and get special access to our host, Paul Rieckhoff, our dynamic guests, and discounts on Angry Americans merch, and exclusive extra content not available anywhere else. This episode is possible thanks to those Patreon members and support from Uncle Nearest Premium Whiskey. Uncle Nearest is the most awarded American whiskey or bourbon for the last two years.

Join the movement. Download this episode now. And at AngryAmericans.us or our YouTube page, you can watch this entire conversation with Secretary Chuck Hagel and a dynamic range of foreign policy and national security leaders like Malcolm Nance, General Mark Hertling, Ambassador Susan Rice, Medal of Honor Recipients David Bellavia and Florent Groberg and reporter James LaPorta. And, a refreshing array of influential voices ranging from Stephen Colbert to Jeffrey Wright to Meghan McCain.