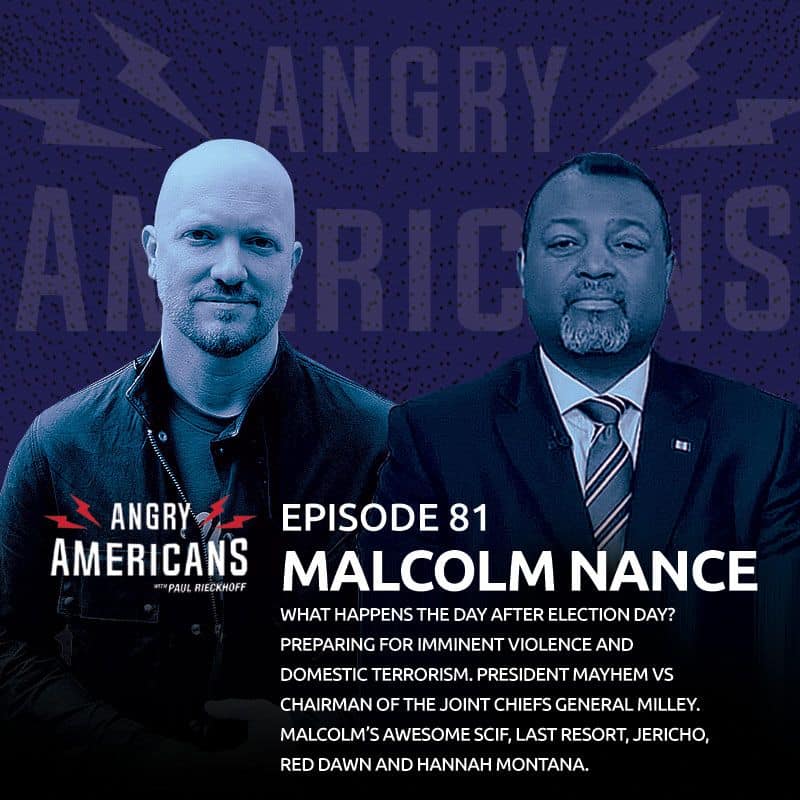 This urgent new episode of Angry Americans, we dig deep into what COULD happen after election day. If Trump wins. If Trump loses. And likely, either way.

Malcolm Nance (@MalcolmNance) is America’s favorite terroism expert. [23:40] A decorated military veteran, an astute analyst, and a truth teller. He’s also a super cool guy–and a true patriot. You may know him from MSNBC or the NY Times Bestseller list. Malcolm served as a U.S. Navy specialist in Naval Cryptology, he was involved in numerous counter-terrorism, intelligence, and combat operations. He’s an expert in intelligence and counterterrorism. He was also an instructor in Survival, Evasion, Resistance and Escape (SERE) training–teaching Navy and Marine Corps pilots and aircrew how to survive as a prisoner of war. He helped to initiate the Advanced Terrorism, Abduction and Hostage Survival course of instruction. And he joins Army veteran Paul Rieckhoff (@PaulRieckhoff) to break down what The Day After could look like.

Angry Americans is your independent source for news, politics, culture and inspiration. You’ll meet powerful, fascinating guests like Malcolm and always gain a unique, independent and hard-hitting perspective like nowhere else in the media. This episode is possible thanks to those Patreon members and support from Uncle Nearest Premium Whiskey. Uncle Nearest is the most awarded American whiskey or bourbon of 2019 and 2020.

If you’re not angry, you’re not paying attention. Especially right now. Join our Angry Americans Patreon community and get special behind-the-curtain access to our host, Paul Rieckhoff, our dynamic guests, and discounts on Angry Americans merch and exclusive extra content not available anywhere else.

Join the movement. Download this episode now. And at AngryAmericans.us or our YouTube page, you can watch this entire conversation with Malcolm Nance and recent episodes with Mick Foley, Stephen Colbert, Mayor Pete Buttigeig, Jeffrey Wright and more.