151. Michael Smerconish. Defining “Independent”. Analyzing Independent Candidates From Gary Johnson to Bloomberg to Schwarzenegger to Yang. How To Be Independent in Media. How F*#ked is Biden with Independents? Neil Young vs Joe Rogan. NFL OT Sucks. 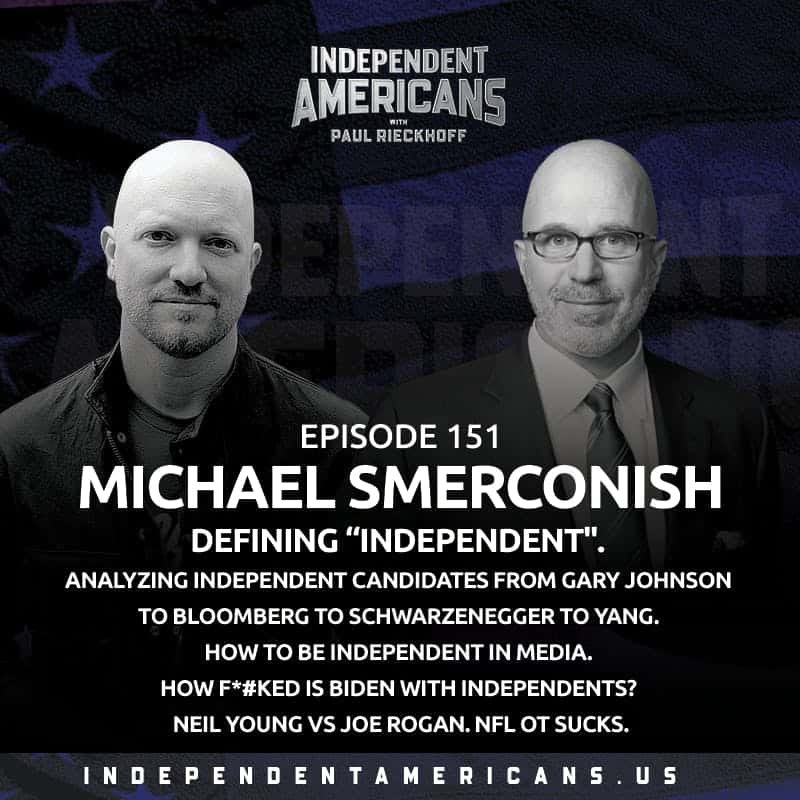 As we all saw this weekend, NFL overtime sucks. A score on the opening drive should NOT end the game. It’s just not fair. The system is broken. Badly. But it’s not just the NFL OT system. The American political system is broken too. Badly. And so is the media. Badly. And the stakes there are so much higher than in football.

And in this episode, we’re staying focused on the media (like we did last episode with Soledad O’Brien). But we’re also zooming out into the bigger picture of where this independent movement is–and where it’s going. We’re breaking down who independents are—and who might be an independent candidate for President in 2024. And we’re continuing to identify the systems that are broken, and offering solutions to fix them.

And our guest has been as focused on it all. For long before we have. And he’s here to help us explore all of it.

He’s a longtime political commentator, radio host, TV host, best-selling author, and maybe the single most high profile political independent in the media. A guy who has served as a guest host for voices on all sides of the political spectrum. He’s been a guest host for Chris Matthews AND for Bill O’Reilly. For Chris Cuomo AND for Glen Beck. And he’s the host of his own SiriusXM radio and CNN TV show. And Paul Rieckhoff’s stunt double.

He’s a one man island of political independence in talk radio and the media: Michael Smerconish (@Smerconish).

–Watch the full video of this conversation with Paul and Michael here.

-Find us on social media or www.IndependentAmericans.us. Independent Americans is powered by Righteous Media.

“Independent Americans is what political pods ought to be: fun, engaging, free-wheeling, and respectful–even welcoming–of different points of view. I’m a fan.