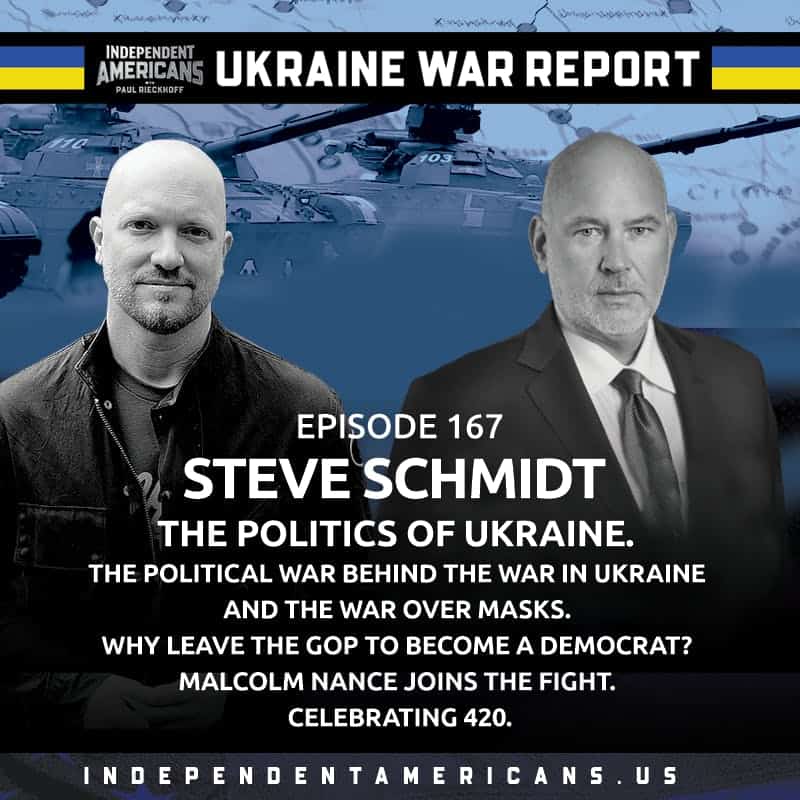 What’s the political landscape like now? How will Ukraine impact the midterm elections? And the 2024 presidential? Will there be a viable independent candidate to provide an alternative to Biden and Trump? Or to capture enough votes to swing it one way or another?

On this week of 420, the day where the world celebrates cannabis. Joints aren’t the only thing being burned down. Our norms, our unity, elements of our founding values are being torched. In 2020, it’s all on fire.

For two months on this show; we’ve looked at the military and foreign policy developments, strategies and tactics. And we’ve looked at the geopolitics. But what about domestic politics? If the outcome of the war in Ukraine is dependent on American support, nothing could change that support more than the election of Donald Trump. So could it happen? What’s happening now?

Schmidt is also a founder of The Lincoln Project, a controversial group founded to focus against Trump. It raised $90M, became the darling of the left and MSNBC, reportedly got a call from Biden after his victory to thank them for their help, then imploded after reports swarmed of its handling of sexual misconduct allegations against one of its co-founders, John Weaver, and of the management of its finances.

From the war in Ukraine, to the American wars over masks, the fighting is non stop, the pace is exhausting, the stakes are high, and the casualties are mounting. It’s all burning down.

And maybe that’s another example of why this is a moment for independent Americans in particular. Maybe we can quell the fires and stop the burning.

We also talk about our friend and frequent guest, Malcolm Nance—who is now putting his own ass on the line to #StandWithUkraine.

–Get the vey cool Saint Javelin t-shirt Paul mentioned (and wore in this episode) and support Ukraine.