31. James LaPorta EXCLUSIVE. The Newsweek Reporter Who Broke the Baghdadi Story. Conan the Special Forces Dog. Defending Colonel Vindman. #RudyButtDial: The Next Chapter. Inside NBC’s This is Us. Trump’s Halloween Scariness. 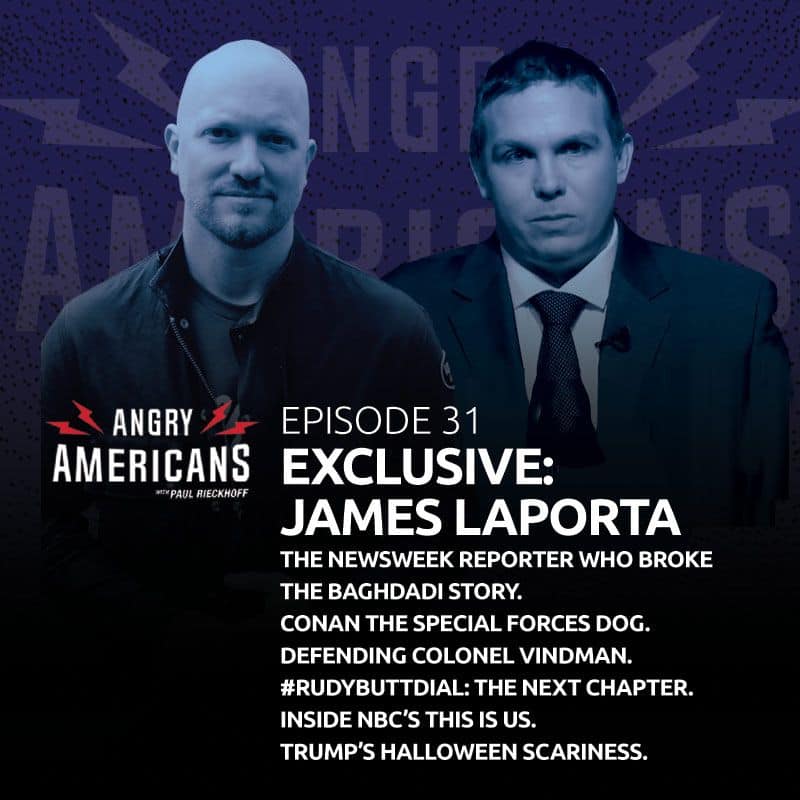 What’s it like to be the reporter who broke the story that US Special Forces had killed ISIS leader Abū Bakr al-Baghdadi? How does it feel to be the first to know the identify of American troops killed in action before the President does? What’s it like to go from serving in the US military to serving as a journalist and being called the “enemy of the people” by your Commander-in-Chief? For this Halloween episode, Newsweek Investigative Reporter, James LaPorta (@JimLaPorta) sat down exclusively with Paul Rieckhoff (@PaulRieckhoff) [42:00] to share it all in this fascinating and timely new episode. Angry Americans take you through the headlines–and also beneath them to reveal the harrowing and stressful world of national defense journalism in the age of Trump.

LaPorta was the first journalist to break the story that captivated the world. And soon after, he broke the news that the Special Forces dog on the raid–whose picture was tweeted by President Trump–has a name. LaPorta has gone from the front lines as a Marine in combat to the front lines as a journalist covering the Trump White House. He’s reported on some of the most important national security stories of 2019: troop movements on the Mexican border, the violence in Afghanistan, the growing veteran suicide problem at home, the revolving door for Secretary of Defense–he’s covered all of it. A Marine veteran who is deeply respected in the military and defense community for his integrity and effectiveness, LaPorta gives you an inside look at modern journalism with the highest stakes possible. He’s also takes you inside Hollywood in his role as a Military Advisor to the massively popular NBC show, This Is Us.

Host Paul Rieckhoff (@PaulRieckhoff) is a renowned activist, Army veteran, author and leads a candid and enlightening conversation with LaPorta–and takes Angry Americans (@AngryAmericans) into the latest headlines you need to know about. From the wildfires in California, to massive protests in Chile, to AOC vs Mark Zuckerberg, to another GOP walkout in Washington, Rieckhoff quickly takes you through news headlines that are more important and truly inspiring with his uniquely edgy and independent style.

If you’re not angry, you’re not paying attention. But there are also good reasons to be happy and inspired. Download the new Angry Americans podcast for free here now. Then, join the Angry Americans newsletter to get free, exclusive content: www.AngryAmericans.us. And go behind-the-scenes for video of this interview and recent guests including Tulsi Gabbard, Samantha Bee, Bradley Whitford, Rachel Maddow, Chef Tom Collichio and many more.