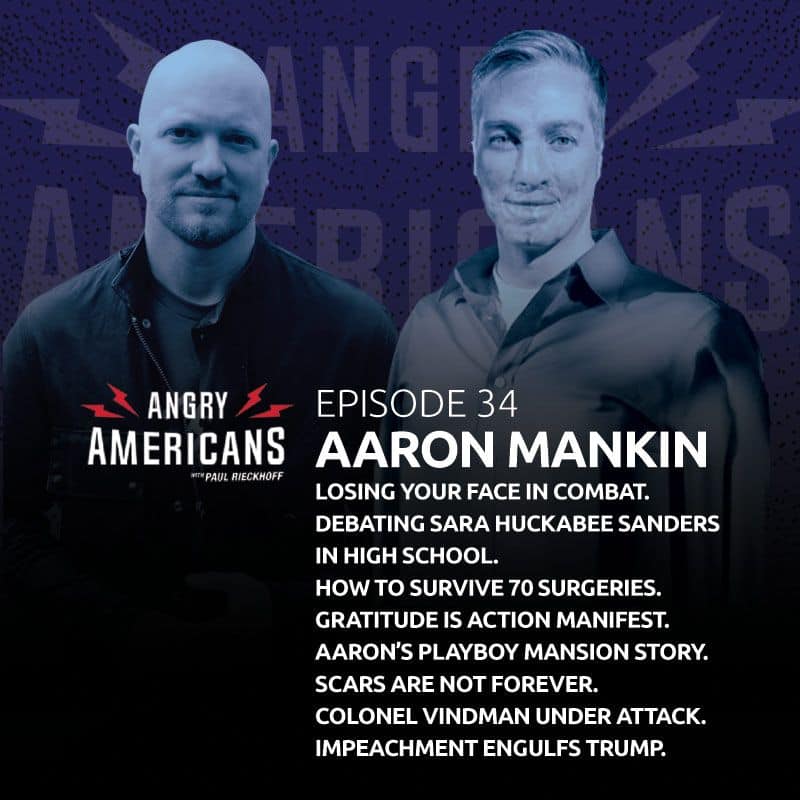 In 2005 in Iraq, the assault vehicle Marine Corporal Aaron Mankin [56:40] was riding in was hit by a devastating improvised explosive device. Four Marines died and eleven others were injured. Aaron survived, but was seriously wounded when his body caught on fire in the blast. He suffered intense burns on over 25 percent of his body. His ears, nose and mouth were essentially gone, he lost two fingers on his right hand and he sustained serious damage to his throat and lungs. You won’t be able to see his scars. But you’ll hear them. Aaron has experienced the unimaginable. But he has endured the pain. He has harnessed the pain. And he has emerged stronger at the broken places. Aaron is now a renowned spokesperson for millions of veterans, a patriot and a teacher. He is a true hero—and funny as hell. This is the single most compelling Angry Americans conversation yet. And a perfect pre-Thanksgiving appetizer of heart-warming content. It’ll leave you thankful, motivated and forever changed. And it’s perfect for sharing with family and friends as the holidays approach.

Host Paul Rieckhoff (@PaulRieckhoff) is a combat veteran, author and renowned activist who has recently appeared on CNN, MSNBC, Pod Save America and more. He guides a candid conversation with Aaron–and takes Angry Americans (@AngryAmericans) entertainingly through the latest headlines you need to know about. From the explosion of impeachment hearings, to attacks on Colonel Alexander Vindman, to the latest Democratic debate, to President Trump pardoning war criminals, to the new Ford Mustang, Rieckhoff breaks down the week’s news with a uniquely independent and edgy style. And during this Veterans Month, he continues a focus on national security and military and veterans issues.

This episode is supported by Fort Hamilton Whiskey. A finely crafted American rye whiskey born in Brooklyn, NY, Fort Hamilton is made purely from rye, malted barley, yeast and no nonsense. Celebrating Alexander Hamilton’s Hearts of Oak Militia and the base that bears his name, this patriotic whiskey honors American bravery and and celebrates the fighting spirit of Angry Americans. Fort Hamilton Whiskey is The Spirit of Revolution. And some damn good whiskey.