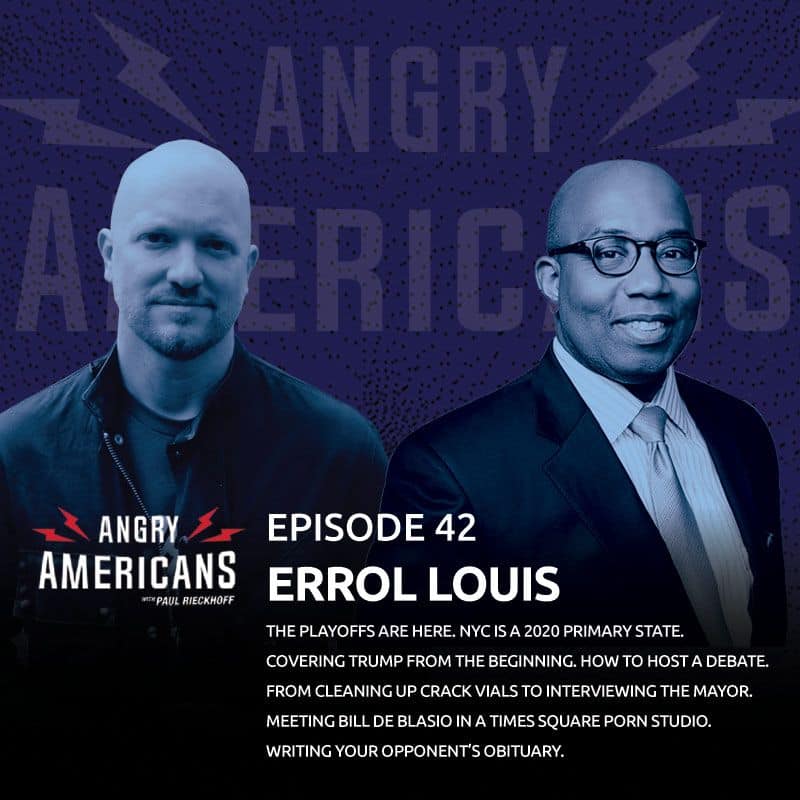 The regular season is over. The Iowa caucuses are almost here. And the Super Bowl is coming soon. It’s time for the playoffs! For football–and for politics. There are only four teams left in the NFL. And only six Democratic candidates left on the debate stage. Especially during the playoffs, if you’re not angry, you’re not paying attention.

Paul Rieckhoff (@PaulRieckhoff) breaks down the latest news on Iran, impeachment, the NFL playoffs and the Democratic debate in Iowa with his trademark independence, experience, and wit. And in this episode, Angry Americans (@AngryAmericans) dives deep into the high-stakes world of Presidential politics and media with a true legend of political journalism. [1:04:53] Errol Louis (@ErrolLouis) is the beloved host of Inside City Hall, a CNN Contributor and Director of the Urban Reporting Program at the City University of New York Graduate School of Journalism.

From the intimate private fundraisers in massive penthouses owned by business moguls, movie stars and hedge funder masters, to the sets of The Late Show with Stephen Colbert—The Rachel Maddow Show—and Saturday Night Live, they’ll all be in NYC often over the next year. And whether it’s Donald Trump, or Andrew Yang or Mike Bloomberg, many of them have or still do call New York home. Like it or not, for better or for worse, the road to the White House goes through New York City.

And in this episode, we’ve got an incredible guest who is the unofficial Mayor of New York City. And a man who has moderated more debates than almost anyone. A man who also served as a panelist in the massively important 2016 Democratic presidential debate in Brooklyn between Hillary Clinton and Bernie Sanders. It was in April 2016, just 5 days before the crucial primary election in New York. It would serve to be Sanders’ last stand, before Clinton eventually got the nomination. And the great Errol Louis was on that stage. A steady, strong, focused voice—to keep things on track–and represent the people. And Louis a guy who made it all the way to that national stage, after himself starting out in the projects in Harlem as the humble son of cop.

Angry Americans is here to take you behind the curtain of Presidential debates, political media and bare-knuckles city politics with the 4 I’s: integrity, information, inspiration and impact. Download the hottest news and politics podcast in America that has been featured by Variety, CNN, The New York Times, Vice and more.