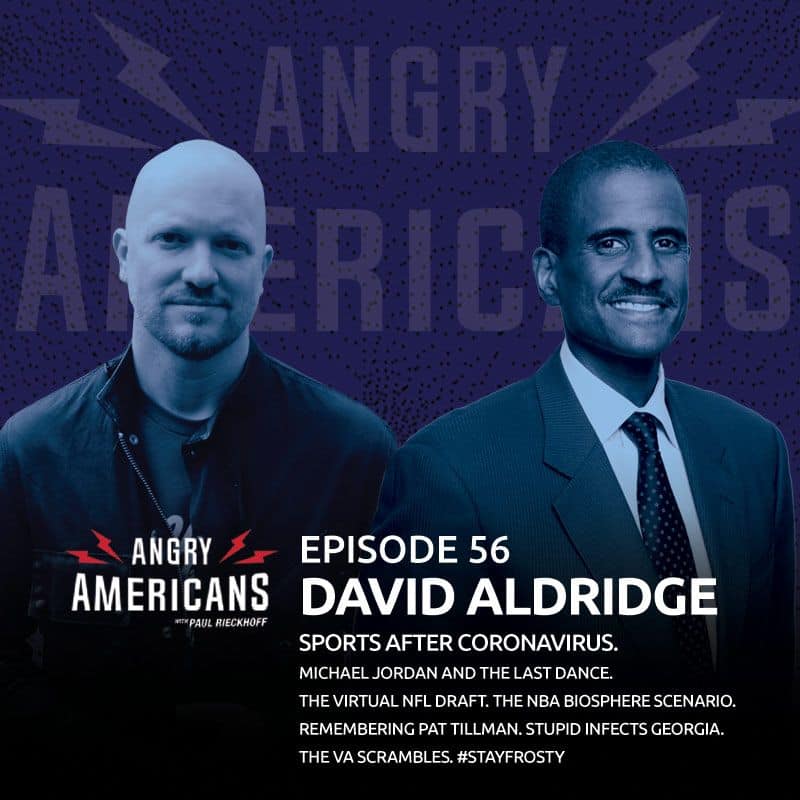 What is the future of sports after the coronavirus? Will the NBA play again this season? How will sports look in our new normal?

David Aldridge (@DavidAldridgeDC) is one of the best and most respected sports writers in America. He’s a basketball icon that’s been in on our TV for decades covering the NBA for ESPN, TNT and now, for The Athletic. He’s also an astute observer of the intersection of sports, culture, politics, race and economics. David has interviewed Presidents and received the Basketball Hall of Fame’s Curt Gowdy Media Award for his contributions to basketball. He’s a tenacious advocate for his hometown of Washington, DC and has interviewed President Barack Obama, Steph Curry and Michael Jordan.

Angry Americans has always focused on the interaction of politics, sports and culture. And as our the war against the coronavirus drags on, sports is one of the things people everywhere miss the most. With concerns from players about safety, and pushes from politicians to restart leagues, David helps us all understand the biggest challenges and the bigger picture of sports in the world of COVID-19. And as the hit ESPN documentary about Michael Jordan and the Chicago Bull, The Last Dance, captivates audiences everywhere, the NFL draft goes virtual, Tom Brady and Rob Gronkowski head to Tampa, and as we recognize the 16th anniversary of the death of NFL player and Army Ranger, Pat Tillman, David’s wisdom will leave you enlightened.

And as the country is ripped by the coronavirus and political division over how and when to shutdown and re-open sports and everything else, independent activist, author and Army veteran @PaulRieckhoff breaks it all down with a kick. Rieckhoff tears into the politicians who are putting politics ahead of people, drills into the exposure of our national security, and continues to hold the White House, Departments of Veterans Affairs and Defense accountability for leadership failures, political nonsense and a rising death toll. It’s a another powerful episode of the show that’s been featured in Variety, NPR, The New York Times, MSNBC and CNN. From front edge of the evolving war against the virus in New York City, to Georgia, to Washington, DC, to North Korea, Angry Americans is the most interesting and independent podcast in America for politics, news and culture.

This episode Angry Americans is powered by the awesomeness of BRAVO SIERRA. BRAVO SIERRA (@BravoSierra_USA) is the military-native performance wellness company that’s built for the pandemic. They deliver high-quality grooming essentials that are formulated with clean ingredients and made in the USA. And BRAVO SIERRA leads by example. 5% of all sales goes to the Morale, Welfare and Recreation programs for active-duty U.S. Military service members, veterans and their families. Go to www.BravoSierra.com/AngryAmericans to get a FREE trial set of their products now. And Angry Americans listeners can use the special discount code ANGRY at checkout for 15% off on all orders.

You can now get exclusive access to the people, events and content behind Angry Americans by joining us on Patreon. You can help keep this important content coming–and get unique connections to powerful information and one-in-a-lifetime opportunities to meet guests like Mayor Pete Buttigieg, Meghan McCain and Henry Rollins.