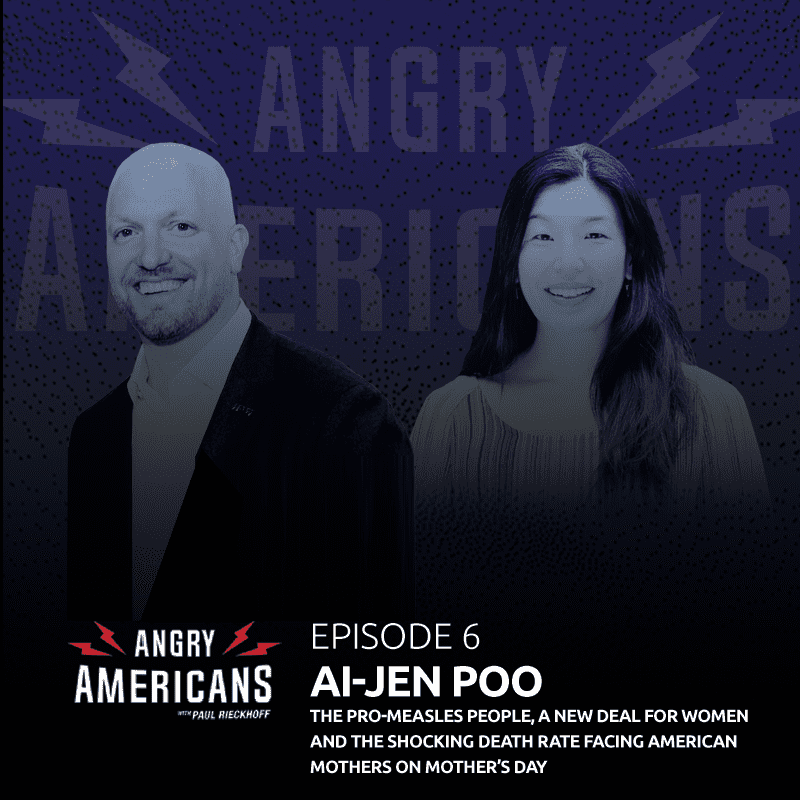 This compelling episode of Angry Americans zeroes in the most urgent issues impacting women in America with one of the nation’s most important leaders for women. The show explores the rise of activists and activism worldwide in the age of Trump. And host Paul Rieckhoff (@PaulRieckhoff) takes aim on a new issue that’s got him angry, and will have you angry too: the people intentionally spreading the measles.

Rieckhoff breaks it down and goes inside the world of political organizing with his friend, fellow activist and world-renowned organizer, Ai-jen Poo (@AiJenPoo). Poo is the Director of the National Domestic Workers Alliance and the Co-Director of Caring Across Generations. She was named to the TIME 100: The Most Influential People in the world list and is defining the future of America.

Ai-jen is a MacArthur “genius” Fellow, a leading voice in the #MeToo movement and recently walked the red carpet at the Oscars with Meryl Streep. She is author of The Age of Dignity: Preparing for the Elder Boom in a Changing America and a founder of a new powerhouse political organization: Supermajority. Supermajority is a new home for women’s activism, training and mobilizing a multiracial, intergenerational community fighting for gender equity together and plans to train 2 million women. Wise, insightful and inspirational, Poo is one of the single most powerful, most important voices in America. And you’ll hear from her in a way you only can on this podcast. It’s a dynamic and important conversation–especially for Mother’s Day.

Angry Americans shares a situation report on actions from recent episodes focused on supporting 9/11 First Responder heroes. And for Mother’s Day, Rieckhoff explores the stunning rise in the deaths of mothers during childbirth in America. As the number of women who die giving birth in America each year has nearly doubled in the last two decades, Rieckhoff breaks down the issues, shares his own wife’s recent childbirth crisis story and offers ways to get involved.

It’s a riveting episode of the new podcast that was recently featured in Variety Magazine and is making waves nationwide. It’s about much more than just being angry. So hit that download button now and step inside an innovative show that really matters.

And for brand new American-made Angry Americans merch, behind-the-scenes videos from the show with Ai-jen Poo, inside the last episode with Sarah Jessica Parker, Peter Berg breaking down the NFL, Willie Geist at the Polish Embassy and more: AngryAmericans.us. Join the movement now. Angry Americans is connecting, uniting and empowering Americans nationwide. And it’s powered by Righteous Media.