62. Brooke Baldwin. Riots in the Streets. Inside CNN While Trump Attacks. Defense Secretary Esper Flails and Fails. What It’s Like to Get COVID-19 When You’re on TV. The VA Finally Stops Supporting Nazi Swastikas. America’s Three Infernos. 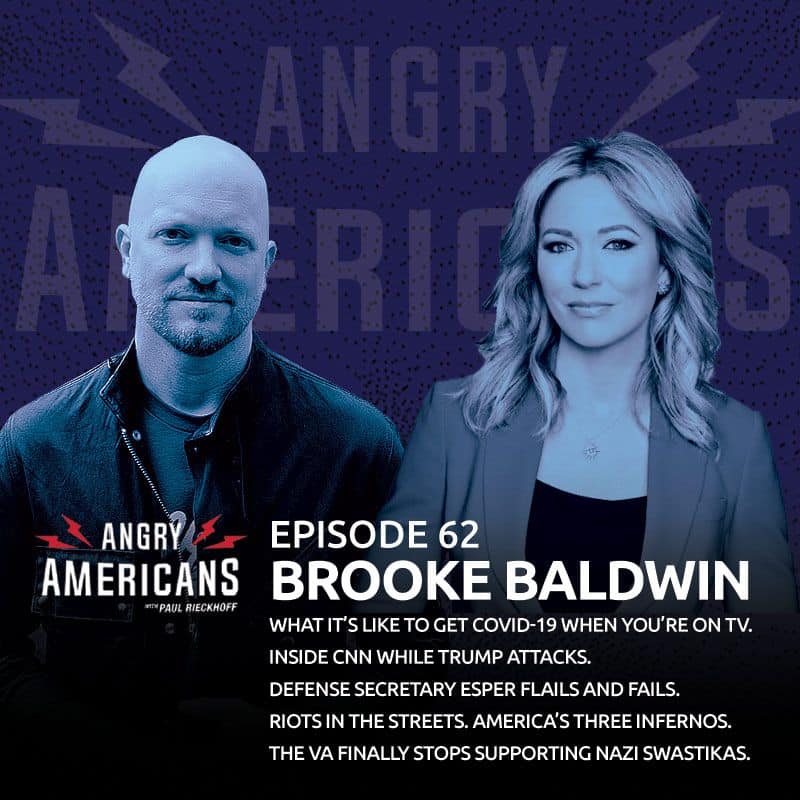 Police, National Guard and military–clashing with American protestors in our nation’s capital and all across America. From coast to coast, America is on fire. On fire with anger, on fire with frustration, with fire division, on fire with pain. Our host Paul Rieckhoff (@PaulRieckhoff) digs into the death of George Floyd, protests, riots, the horrid leadership in the Department of Defense and VA, the pandemic, and more with an extended and candid conversation with CNN anchor and COVID-19 survivor, Brooke Baldwin (@BrookeBCNN). [1:28:15] Brooke is the dynamic host of CNN Newsroom–the daily news show on CNN seen worldwide. From her drink of choice to what makes her angry, this is Brooke Baldwin candid, uncut and like you’ve never heard her.

She doesn’t just cover stories–she feels them. She has a unique ability to channel the emotions of her audience like few TV anchors can. For over a decade at CNN, she’s covered breaking news with empathy, focus and humor. And after the pandemic hit, she became the news—as one of the first TV journalists in America to announce she’d tested positive for the coronavirus, approaching it with the same openness, candor and humility that has defined her career. She’s back on the air. Holding leaders accountable, telling the stories of struggling Americans, and now, she has the unique perspective of covering rioters attacking CNN headquarters in Atlanta–the place she grew up.

Her work has taken her to some of the biggest events of the last two decades. From the Newtown massacre and the Boston Marathon bombing, to the Arab Spring and multiple American protest movements, Brooke has been on the ground and at the anchordesk bringing breaking news to Americans. Her dedication doesn’t stop when the satellite trucks pull out of town. After a series of mass shootings, Brooke hosted a moving 2015 town hall, which made her a finalist for the Peabody Award–broadcast journalism’s highest honor. She’s also uniquely down-to-earth and fun. She’s a massive University of North Carolina sports fan, and Brooke is also the creator and host of American Woman, a CNN digital series that focuses on women who’ve blazed trails, are shattering glass ceilings, and are looking to share their stories to inspire others like them.

This episode is powered by BRAVO SIERRA. BRAVO SIERRA (@BravoSierra_USA) is the military-native performance wellness company built for every lifestyle. BRAVO SIERRA delivers high-quality grooming essentials formulated with clean ingredients made-in-the-USA. And BRAVO SIERRA gives back to America’s heroes. 5% of all sales support programs for Military service members, veterans and families. And perfect for Father’s Day. Visit www.BravoSierra.com/AngryAmericans to get a FREE trial set now. Angry Americans listeners can use the discount code ANGRY at checkout for 15% off all orders.