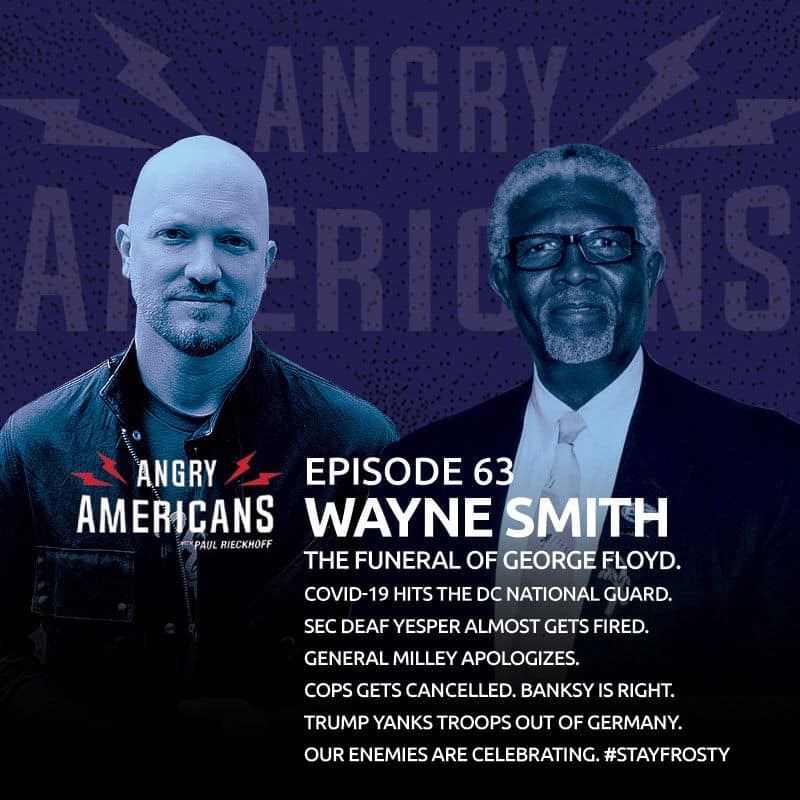 In this episode, we’ll take a step back from the frontline of our war against the virus to get some perspective. We’ll look back at history, so we can find a way forward. We’ll get up on the balcony, have a smoke, and look down on the chaotic moshpit of a dancefloor that is America right now.

We’ll slow down a bit, so we can go fast.

We’ll explore what war, racism, the virus and President Mayhem are doing to our soul — as individuals and as a nation. And we’ll have deep conversation with Wayne Smith, [1:22:14] a man that is so cool that his Twitter handle is really @1soulbrother. Movements need leaders. And later, if they survive, movement leaders graduate to become elders. And that’s what Wayne is. He’s an elder for America.

Wayne Smith is an accomplished veterans advocate who has worked with war veterans for nearly four decades. A native of Providence, Rhode Island, he was an altar boy and choirboy. After serving nearly 18 months in Vietnam as a combat medic, Wayne overcame his own wartime trauma before becoming a nationally recognized mental health therapist and advocate for war veterans. Smith has led educational programs about veterans and the causes and consequences of war, and helped raise more than $2 million for the Vietnam Veterans Memorial Fund. In 1998, Smith returned to Vietnam with 20 American veterans to promote peace and reconciliation. Together with 20 Vietnamese soldiers, these former enemies rode bicycles 1,200 miles — from Hanoi to Ho Chi Minh City — to help heal some of the wounds of that war. Smith is also one of the veterans featured in the Emmy Award winning documentary about the war. He also serves on the board of Iraq and Afghanistan Veterans of America (IAVA).

As the tempers flare hotter and hotter, all across America, Wayne joins us to bring some perspective, wisdom, history and, maybe most of all, peace through strength.

As anger, activism and the stupid continue to engulf more and more of the country, we’ll try to bring a little peace.

It’s another episode of the most dynamic podcast in America for independent politics, news and culture. And the pod continues to make waves and was recently featured on CNN, MSNBC, Fox News, Variety, NPR, The New York Times, and on SiriusXM.

This episode is powered by BRAVO SIERRA. BRAVO SIERRA (@BravoSierra_USA) is the military-native performance wellness company built for every lifestyle. BRAVO SIERRA delivers high-quality grooming essentials formulated with clean ingredients made-in-the-USA. And BRAVO SIERRA gives back to America’s heroes. 5% of all sales support programs for Military service members, veterans and families. And perfect for Father’s Day, which is Sunday, June 21. Visit www.BravoSierra.com/AngryAmericans to get a FREE trial set now. Angry Americans listeners can use the discount code ANGRY at checkout for 15% off all orders.