160. UKRAINE WAR REPORT. Jason Dempsey, PhD. Remembering Brent Renaud. Putin is the Bully at the Bar. Zelensky Challenges Congress. A Defense of Biden’s Strategy. The Kids Are Not Alright. The Battle for Kiev. The War Story Behind The Cranberries’ Zombie. 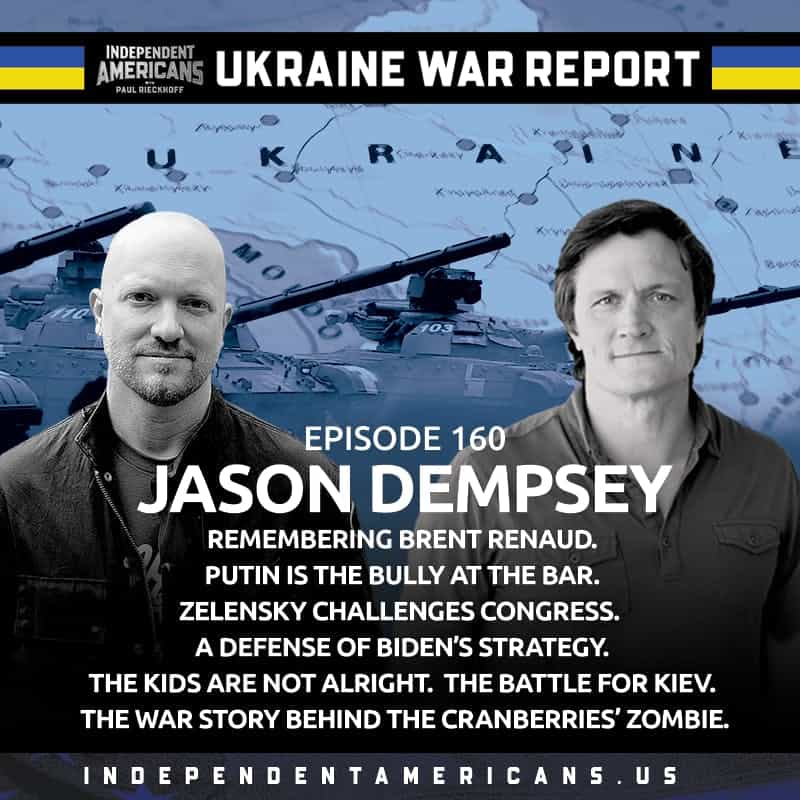 As the war in Ukraine rages on, and just days after American journalist Brent Renaud was killed, President Zelensky delivered a historic address to the United State Congress. He again called on America and President Biden to enforce a no-fly zone. And to send MiG fighter jets. And our government has said they still will not. That may change. But for now, today, after the standing ovation from Congress, Zelensky got a big fat American NO to his top requests. But he didn’t leave empty handed. He got a new injection of American firepower totalling almost $1B dollars. We dig into what that includes, how it will be used, and what could happen next–as only experienced, next-generation national security and military analysts can. And in this pod, we’ve got two of the best.

Jason Dempsey (@Jason_K_Dempsey) is a bad-ass warrior-scholar. A former Army infantryman with a PhD in politics who loves beer and bikes. A professor, author, researcher, combat veteran and one of the country’s foremost experts on civil-military relations, Jason is West Point graduate, a PhD, and Adjunct Senior Fellow of the Military, Veterans, and Society Program at the Center for a New American Security (CNAS) and a powerful voice that must be heard. He led units on the ground in Afghanistan, served inside the White House, and literally wrote the book on the modern United states military: Our Army: Soldiers, Politics, and American Civil-Military Relations. He’s also a dad, a lover of good beer and no-BS guy who pulls no punches. Jason previously appeared in Episodes 95 (January 14, 2021) and Episode 76 (Sept. 10, 2020).

Every episode of Independent Americans hosted by Paul Rieckhoff (@PaulRieckhoff) is pulled from the truth beyond the headlines–and offers light to contrast the heat of other politics and news shows. Rieckhoff is a former Army infantry officer, who knew Brent Renaud for many years. He reflects on the loss and legacy of his friend, and tears into all the latest political news. It’s independent content for the 42% of Americans that proudly call themselves independent. And delivers a shot of the Righteous Media 5 Is: independence, integrity, information, inspiration and impact. Always with a unique focus on national security, foreign affairs and military and veterans issues. This is another insightful pod to help you stay vigilant. Because vigilance is the price of democracy. In these trying times especially, Independent Americans will continue to be your trusted place for independent news, politics, inspiration and hope. Stay vigilant, America.