161. UKRAINE WAR REPORT EXCLUSIVE: Matt Gallagher. The American Veteran and Author Went to Ukraine to Support the Fight. Why Did He Go? What Did He See? What Do Ukraine Forces Need Now? What’s His Message for Biden? What Does He Tell His Kids? 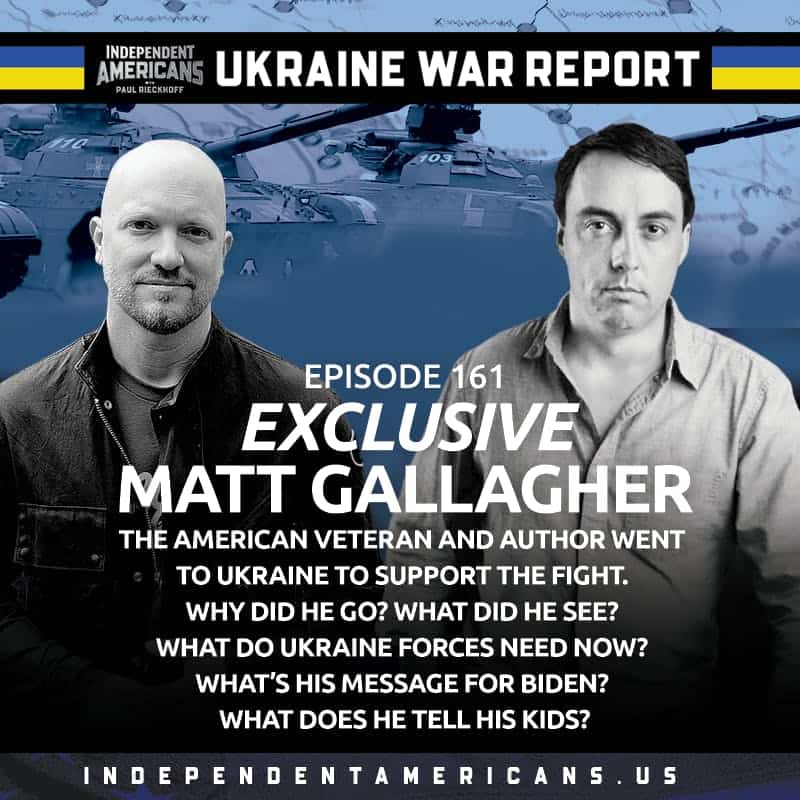 An unknown number of American veterans have heard the call and boldly volunteered to join the fight in Ukraine. Matt Gallagher (@MattGallagher0) is one of them. Utilizing what he learned as a US Army Scout Platoon Leader in Iraq, Matt spent the last few weeks training Ukrainian civilians in how to fight and survive in Lviv. But Matt is not just any veteran. He is the internationally-recognized author of the novels Empire City and Youngblood, the class Iraq war memoir Kaboom, and a finalist for the Dayton Literary Peace Prize. His work has appeared in Esquire, ESPN, The New York Times, The Paris Review and Wired. He’s also co-editor of the short fiction collection Fire & Forget: Short Stories from the Long War. He’s a popular, funny and insightful voice—including on Twitter–on everything from politics and war to his beloved Cleveland Browns.

Matt just left Ukraine, and joined our host, Paul Rieckhoff (@PaulRieckhoff) for an exclusive interview via Zoom from just across the border in Poland. Matt is an old friend of Paul’s, a former Iraq and Afghanistan Veterans of America (IAVA) colleague, and one of his favorite voices in the public square. This is Matt’s first extended media interview after his harrowing experience and brief appearance on CNN’s Anderson Cooper 360 with fellow American vets Adrian Bonenberger and Ben Busch. He shares what it was like to train brave local students, lawyers and police officers from ages 16 to 60 to kill Russians–using antiquated weapons and no body armor. Matt is part of the first wave of American veterans that have entered Ukraine and could have a profound impact on the way America and the world views the war.

Why did he go? What did he see? Who were the people he was training to use AK-47’s and kill enemy tanks? What do the Ukraine forces he trained need? What’s Matt’s message for Biden? And for you? History is unfolding all around us and Matt will be a voice to help us understand it. He’ll also share ways that you can take action–by supporting Razom–a support non-profit in Ukraine.

Matt was featured in Vanity Fair as one of the voices of a new generation of American war literature. In 2017, Senator Warren read Matt’s Boston Globe op-ed “Trump Rejects the Muslims Who Helped Us” on the Senate Floor.

A graduate of Wake Forest and Columbia, Matt is a 2021-23 fellow with the Tulsa Artist Fellowship, based in Oklahoma. He lives with his wife and sons in Tulsa and works as a writing instructor for NYU’s Words After War program– devoted to bringing vets and civilians together to study conflict literature.

Every episode of Independent Americans hosted by Paul Rieckhoff is the truth beyond the headlines–and light to contrast the heat of other politics and news shows. It’s content for the 42% of Americans that proudly call themselves independent. And delivers the Righteous Media 5 Is: independence, integrity, information, inspiration and impact. Always with a unique focus on national security, foreign affairs and military and veterans issues. This is another pod to help you stay vigilant. Because vigilance is the price of democracy. In these trying times especially, Independent Americans will continue to be your trusted place for independent news, politics, inspiration and hope.