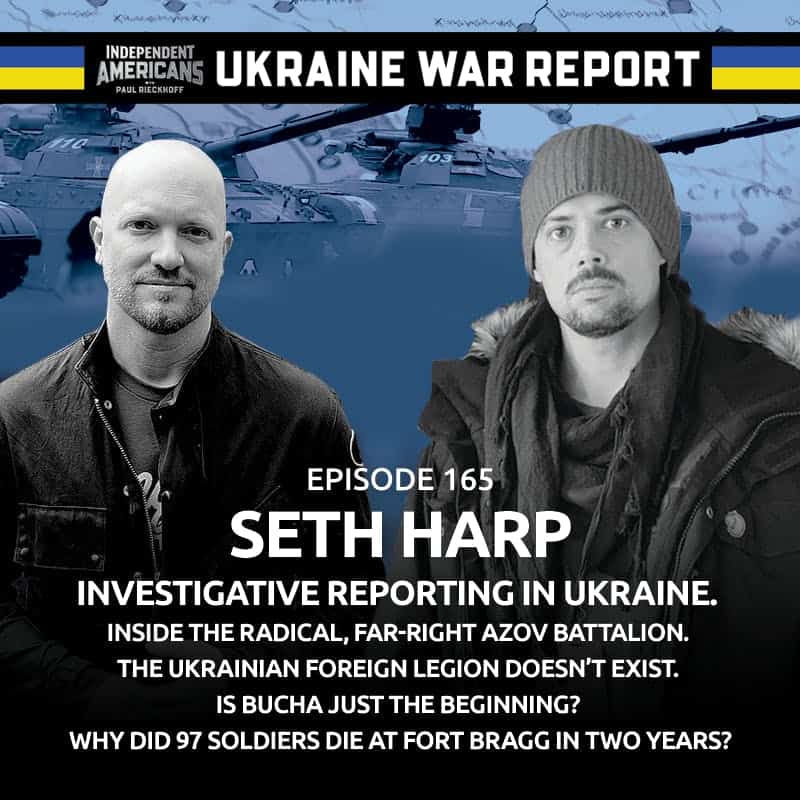 Ukraine remains under attack. Civilians are still dying. Bucha, a suburb of Kiev, is the first of what could be many that reveal the scope and scale of war crimes. And it could get worse. Russian chessmaster Garry Kasparov said it–and I’ve been repeating since the war began. EASY IS OVER.

The tide may have turned. But the flood is just starting. The flood of pain and loss. And flood of sadness and need. The flood of weapons. The flood of blood. Wartime is here. Not just for Ukraine. But for everyone who cares about freedom. And now, more than any other time in our lifetime, now is a time for us all to stay vigilant. We all need to help Ukraine. And understand the flood of pain they’re in right now. And do more to help.

Welcome to another Ukraine War Report. Seth Harp (@sethharpesq) was a sophomore at UT-Austin when the Iraq war started and his Army Reserve unit got called up. He went over there as a simple truck-driving private and did a 15-month tour from 2003 to 2005. And the first piece he wrote for Rolling Stone was about an ambush that befell one of his detachments.

After college he went to NYU Law and spent five years practicing law, first as a corporate lawyer, later as an assistant AG at the Texas AG’s office. While he says there were a lot of things he liked about the profession, a strong desire to write led him to quit and go to Columbia Journalism School.

He graduated in 2016 and started writing for Rolling Stone. They sent him to Syria a couple of times, as well as Iraq, and to Mexico on three or more occasions. He developed a specialty covering the intersection of the military, armed conflict, and organized crime, reporting not only for Rolling Stone but also Harper’s, The Intercept, The New Yorker’s News Desk, The NY Times Magazine’s At War, Columbia Journalism Review, The Texas Observer, and The Daily Beast.

Now, he’s in Ukraine on assignment for Harper’s and digging deep, running down leads, and gathering material for a number of stories. And he’ll preview them in this episode.

He’s on the inside and he takes us there with him. Into Ukraine. Into Kyiv. And into one of the most controversial units in the fight. The notorious, far-right Azov Regiment. Seth talked to it’s founder, visited its Kiev headquarters and shares what he found. He also shares new reporting and how few foreign volunteers are actually joining the fight. And, explains why, back at home in the US, so many elite soldiers are dying mysteriously at Fort Bragg in North Carolina. It’s a deep and insightful look into the conflict—and the Ukrainian and American militaries—that you can’t get anywhere else.

–Get the Ghost of Ukraine t-shirt Paul mentioned (and wore in this episode) and support the folks there now deep in the fight.