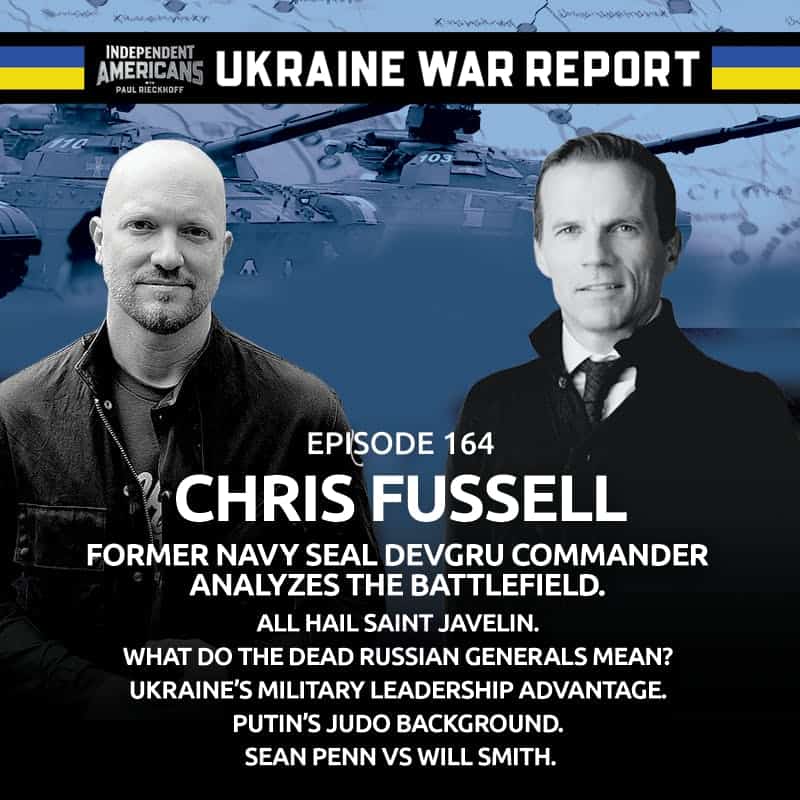 Millions of civilians are caught in an unimaginable hell that continues to unfold in Ukraine.

But what’s really happening on the battlefield? What weapons are making a difference? How are the Ukrainian and Russian militaries critically different? What critical missions in/around Ukraine might American Special Forces get tasked with? We’ve all seen lots of retired generals on cable news. And we’ve all seen quick videos on social media of tanks getting blown up. In this episode, we’re going deeper in a way you haven’t heard before. With a guest who knows more about 21st century battle than just about anyone. He doesn’t just know it academically, he knows it personally. He’s a returning guest and a true leader. Former Navy SEAL DEVGRU Commander, Chris Fussell.

Chris (@FussellChris) is a man who knows war. Steeled by leadership roles in the most selective Special Operations units in the military, he understands the chaos of modern combat. He led the most elite unit: the Naval Special Warfare Development Group (DEVGRU) and Navy SEAL Teams 2 and 8 on some of the most critical missions of our generation.

He joined us back in Episode 50 in March, 2020–right before the pandemic exploded. And a month later for a special Dispatches.

Chris spent 16 years at the tip of the spear for America’s most complex national security challenges and as Aide-de-Camp to Gen Stanley McChrystal as he commanded the Joint Special Operations Command (JSOC) in Iraq. He teaches leadership at Yale, speaks to packed audiences, and coaches top leaders worldwide.

He’s the author of the bestsellers, Team of Teams: New Rules of Engagement for a Complex World and One Mission: How Leaders Build a Team of Teams and now serves as President of McChrystal Group–an elite management consulting and leadership development firm in Washington.

A former wrestler and with a degree in philosophy, Chris is a true warrior philosopher. He has a Master of Arts in Irregular Warfare from the Naval Postgraduate School, and received the Pat Tillman Award for highest peer-rated Special Operations Officer. His thesis focused on the interagency collaboration and intelligence sharing processes that drove effective, cross-silo collaboration during the peak of the wars in Iraq and Afghanistan.

Chris knows modern warfare. And he’s gonna break down the strategic and tacticial. The political and psychological. Almost nobody you see on TV or hear on the radio has the depth of personal experience in combat that Chris does. Or the mind to pull apart what’s happening beneath the headlines.

-Check out Chris’ book: One Mission: How Leaders Build a Team of Teams

–Here’s the video of the dancing Ukrainian troops that Paul’s mentioned.

-WATCH video of the Paul and Chris conversation here.