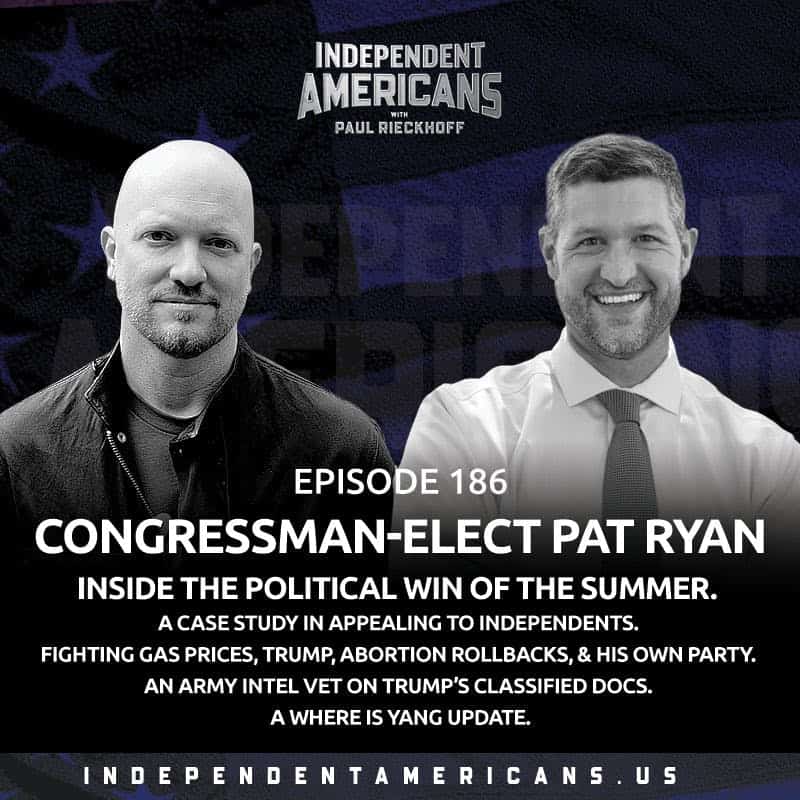 Democrat Pat Ryan (@PatRyanUC) just won a special Congressional election in upstate New York that has the entire political world talking. Few picked him to win in the traditionally Republican-leaning area. But against the odds, the combat veteran pulled it off. And inspired people of all backgrounds nationwide. And now, analysts and strategists nationwide are rushing to understand how he did it. We’ll take you inside the historic victory in a way no other conversation with Ryan has.

Our Paul Rieckhoff (@PaulRieckhoff) is a good friend and supporter of Ryan. He also lives in the NY-19th Congressional district that Ryan just won. This candid, smart and fun conversation takes you inside the district, the strategy, the demographics, the leadership lessons-learned, and the future. And explores what it all means for the fall election (when Ryan will run again, in a newly-designed district), for the future of politics, for the power of independent Americans, and for the Presidential election in 2024.

Ryan’s election victory is a case study in focus, planning and heart. And by fighting gas prices, utility companies, Trump, abortion rollbacks, and his own party, the win is a case study in how to appeal to independent voters in 2022.

We’ll also dig into a new effort in Pennsylvania led by former NFL football star and Vietnam veteran Rocky Blier to open closed primaries to veterans–and hundreds of thousands of other independent voters who have been shut out of the process and denied a voice. Roughly 50% of veterans call themselves independent in that state–and nationwide.

Independent doesn’t mean the middle. It means none of the above. And the solution for empowering them is not a new party founded by Republicans and Democrats who switched jerseys a few weeks ago. It’s fixing a broken election system–with efforts like this one at the state level in Pennsylvania. We’ll pull apart why.

And, speaking of independent politics, we’ll share a #WhereIsYang update. It’s been one week since Forward Party Co-Chair Andrew Yang ghosted on a scheduled interview on this show. And after lots of outrage from the independent Americans community–and casual observers–Paul has significant developments to share.

And, we’ll check in with Paul’s 3 and 7-year old boys, and reflect on a wild summer. You definitely wanna hear this pod and start your September off right.

-Check out some of Paul’s favorite places in Ulster County, NY (the place Pat Ryan now represents) that he mentioned on the show:

–The Hoot music and culture festival

-Find us on social media and www.IndependentAmericans.us. Where you can also get IA merch.

-Wanna advertise on the pod and reach the most coveted voters in America? Hit us up.