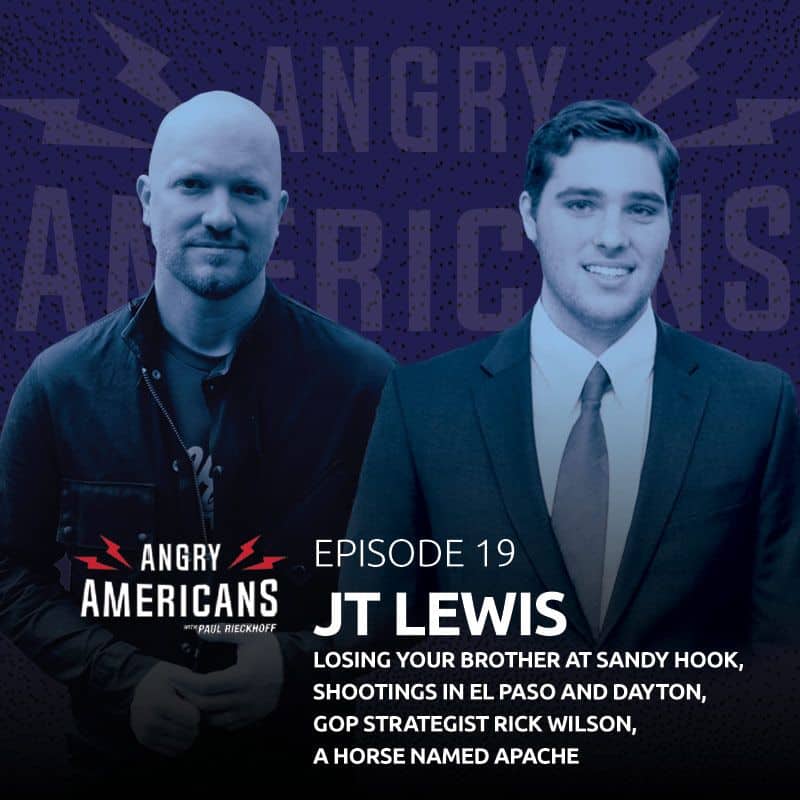 This is the most powerful interview we have ever had on Angry Americans. After mass shootings in El Paso and Dayton rocked our already fragile nation, Paul Rieckhoff (@Paul Rieckhoff) sat down exclusively with a young man that has captivated and inspired America: JT Lewis (@thejtlewis). JT Lewis knows more about mass shootings than just about anyone in America. He is the 19-year-old brother of Jesse Lewis, a 7-year-old hero who was one of 20 children and 6 adults murdered at the Sandy Hook massacre in Newtown, Connecticut. Young Jesse bravely rallied his friends to run for safety, just before losing his own life. After losing his only brother, then 12-year-old JT committed his life to honoring Jesse’s memory by making a difference in the world. He raised money for Rwandan genocide survivors, met with both Presidents Obama and Trump, and just three weeks ago announced his candidacy as a Republican for State Senate in Connecticut–at just 19-years old. The freshman college student and football player is a powerful voice on gun violence and an inspiration for all Americans. And especially right now, his is a voice that must be heard.

And as a show that is always focused on being a voice for political independents, Angry Americans also check in with GOP strategist, media guru and former Giuliani adviser, Rick Wilson (@TheRickWilson). Last week, we talked to Democrat whisperer, Tommy Vietor (@TVietor08) of Pod Save America (@PodSaveAmerica). This week, we get the other side of the aisle and talk to Republican whisperer Rick Wilson. Rick breaks Trump’s reaction to El Paso and Dayton, which Democrats are the strongest and boldly predicts whether or not Donald Trump will be re-elected.

This emotional and necessary new episode of Angry Americans is supported by Mizzen+Main (@MizzenAndMain). Mizzen+Main is an impactful American company headquartered in Texas that makes the most comfortable dress shirts on the planet. Made from performance fabrics, these are shirts every man in America should check out. Especially now that the heat of summer is upon us. Visit Mizzen+Main’s website at www.Comfortable.AF and use the code ANGRYAMERICANS at check-out to get $10 off an awesome dress shirt now.

Join the Angry Americans movement. Download the podcast now. And see behind-the-scenes videos with guests like Soledad O’Brien, Ron Perlman, Ai Jen Poo and Rachel Maddow, get some cool merch and more at AngryAmericans.us. If you’re not angry, you’re not paying attention. Angry Americans is connecting, uniting and empowering people of all backgrounds nationwide and is powered by Righteous Media.