26. Dean Kamen. Trump’s Ukraine Phone Call. On The Streets at Climate Strike with Greta. Inventing iBOTs, Segways and Scooters. The Wheelchair of the Future. Inside DARPA. Using Robots To Build Kids. Revenge of the Nerds. 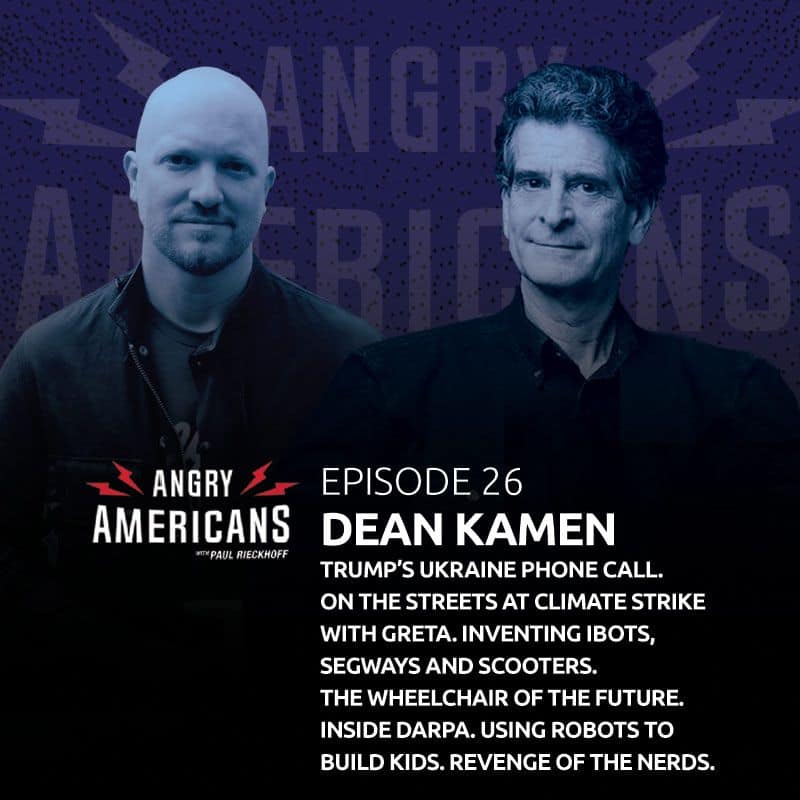 Dean Kamen [22:32] is one of the greatest inventors of our time. He invented the Segway, the first drug infusion pump, and the Slingshot–a water purification device that requires no filters, can turn almost any kind of water into drinking water and can operate using cow dung as fuel. He also invented the LUKE (Life Under Kinetic Evolution) prosthetic arm for the Department of Defense’s DARPA (Defense Advanced Research Projects Agency). And now, Dean has invented invented a revolutionary all-terrain electric wheelchair known as the iBOT. He rode to our interview on Angry Americans (@AngryAmericans) with host Paul Rieckhoff (@PaulRieckhoff) on the newest version that he unveiled to the world this week in New York–and shares why it can change history not just for the disabled and wounded veterans–but for everyone.

Like all our guests, Dean Kamen is an iconic, important and inspiring American. One who’s shaped what America has been in the past, is in the present, and more than any other guest we’ve had so far, he’s shaping the future. One of Dean’s proudest accomplishments is founding FIRST® (For Inspiration and Recognition of Science and Technology), an organization dedicated to motivating the next generation to understand, use and enjoy science and technology. This year FIRST® will serve more than 1 million young people, ages 6 to 18, in more than 86 countries. High-school-aged participants were eligible for more than $50 million in scholarships from over 200 leading colleges, universities, and corporations.

And as 16-year old Swedish activist Greta Thunberg rallied millions worldwide to focus on climate change, Paul Rieckhoff went out in the streets for the protest in New York City [1:45:16] –one of the biggest of thousands that happened all across the world. He walked in the march, interviewed participants–and counter protestors. Angry Americans take you inside a movement of hundreds of thousands of Angry Americans—and tons of kids. We walked with them, we talked with them, and we stood in the crowd, just a few hundred feet from Greta when she gave her speech that echoed immediately around the globe. It was a powerful and historic event, and we take you inside all of it.

And as always, Rieckhoff digs into the most important stories in America with a fresh, independent and unique perspective. From the sale of Javelin missiles to Ukraine, to the latest 2020 polling, Rieckhoff breaks it all down.

If you’re not angry, you’re not paying attention. Download the new Angry Americans podcast for free now. And go behind-the-scenes for video of Dean Kamen and the new iBot, and of recent guests including Chris Cuomo, Tom Collichio, Ai Jen Poo and Rachel Maddow at www.AngryAmericans.us.