27. Bradley Whitford. Impeachment Is Here. The West Wing vs The Handmaid’s Tale. Commander Lawrence and Robert McNamara. The Death Penalty in Politics. Backstage with Henry Kissinger and James Franco. The Adventures in Babysitting License Plate Contest. 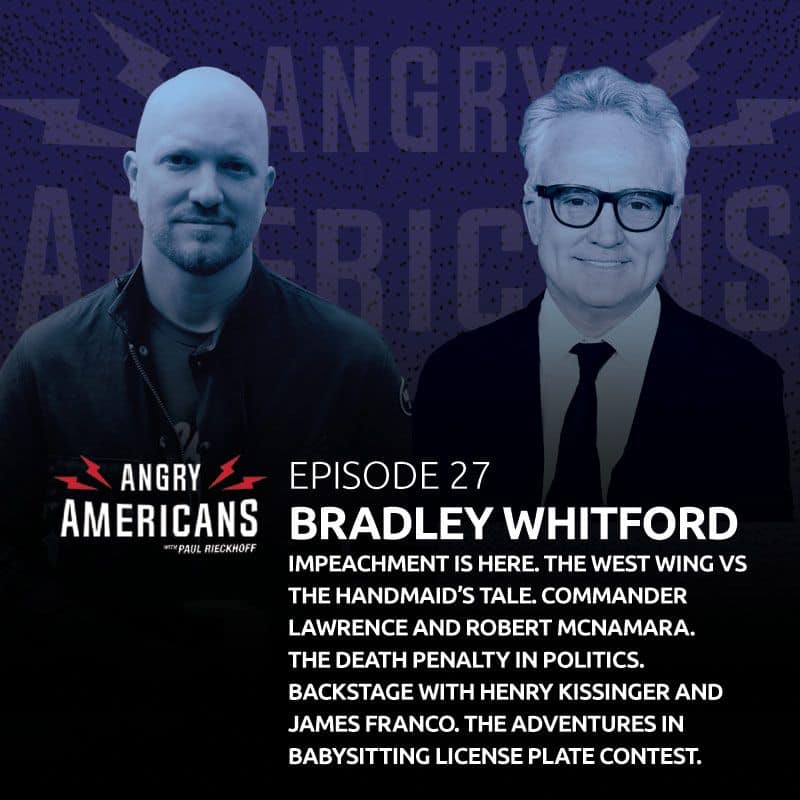 With the American political landscape facing a new bombshell every few hours, host Paul Rieckhoff (@PaulRieckhoff) takes Angry Americans deep into the intersection of entertainment and politics with a man who has uniquely lived in that intersection for the last four decades. [27:50] Legendary actor and activist Bradley Whitford (@BradleyWhitford) has starred in The West Wing, won an Emmy for Transparent, and is fresh off winning another Emmy for his brilliant role as Commander Lawrence in the global phenomenon, The Handmaid’s Tale. Also a dedicated political activist, Bradley openly and hilariously shares his thoughts on President Trump, how his childhood as a Quaker shaped his politics, why he likes bourbon, and which candidate for President he’s supporting for 2020. He also shares West Wing and personal stories you’ve never heard anywhere else. And as every guest on Angry Americans does, Bradley shares what has him angry, what makes him happy, and what was the very first car he ever owned. It’s Bradley Whitford uncensored and without commercial interruption. A funny, candid, insightful, uninterrupted conversation with one of the most dynamic and intelligent actors of our time.

And as in every episode of Angry Americans, Paul Rieckhoff rips into the most urgent stories in America with a sharp and independent perspective. From the rising support for impeachment, to Robert De Niro’s F-bombs on CNN, to rocket testing in North Korea, to Bernie Sanders’ health problems, to the new Rambo movie, Rieckhoff digs into all of it.

If you’re not angry, you’re not paying attention. Download the new Angry Americans podcast for free now. And go behind-the-scenes for video of Bradley Whitford and other recent guests including Rachel Maddow, Dean Kamen, Chris Cuomo, Willie Geist and Wes Moore at www.AngryAmericans.us.

This episode of Angry Americans is sponsored by our friends at Oscar Mike. Oscar Mike is a Veteran owned and American-Made lifestyle apparel brand that exists to create support for wounded veterans. Oscar Mike keeps injured Veterans “On-the-Move” in every aspect of life and inspires everyone to do the same. Oscar Mike believes that by staying active and focusing on that next upcoming goal, anyone can realize their full potential. They’ll get you inspired to do just that. Oscar Mike makes awesome, casual and super-comfortable apparel–that is also affordable and made-in-the-USA. Sweatshirts, t-shirts, hats–even yoga gear. Learn more and support the cause now at OscarMike.org.