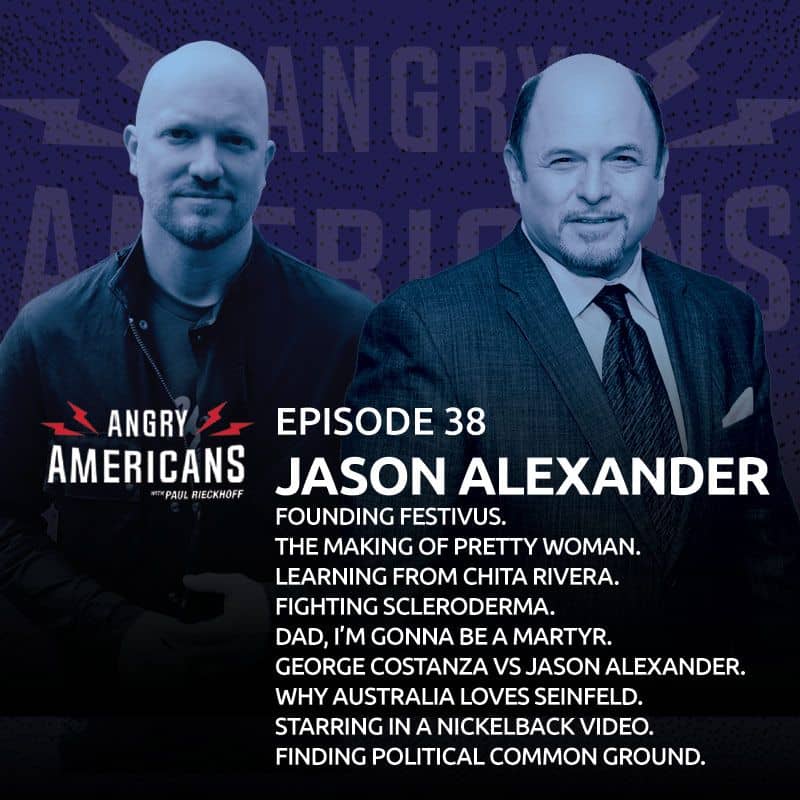 This episode, we have a very special Festivus gift for all you good little boys and girls! Jason Alexander (@IJasonAlexander) joins Angry Americans for an extended and extremely candid conversation. Following our massive episode with Mayor Pete Buttigieg, we’ve got a huge change of pace. The man himself! The legend. The iconic actor who played George Constanza on Seinfeld is here to tell us about the true founding story of Festivus!

And he’ll share amazing stories from an incredible life of laughs, lessons—and activism. In this episode, you’ll get a special holiday gift. You’ll meet the man behind the character you know so well. You’ll hear Jason explain what it’s been like to live life in a world where everyone thinks he’s really George Constanza. But you’ll also hear about his almost 40 years of entertaining America–from stage with Chita Rivera, to Pretty Woman with Julia Roberts, to a voicework on Dora the Explorer to a video with Nickelback. He won a Tony Award and is known worldwide. But he’s also a committed activist, a patriot, a father–and one of the most entertaining, insightful and inspiring American success stories you’ll ever hear. And yes, even Jason Alexander is angry. But this candid, extended, fun conversation will bring you hope–and happiness this holiday.

But first, even during Festivus, if you’re not angry, you’re not paying attention. Paul Rieckhoff (@PaulRieckhoff) soars like Santa through the headlines you need to know about in news, politics and culture. Impeachment, the latest Democratic debate, Nigerian-American immigrant Kamaru Usman vs Trump-loving Colby Covington for the UFC Welterweight Championship, and the importance of Emmet Otter’s Jugband Christmas.

And just like in every episode, you can be a helper. Scleroderma is a disease that impacts hundreds of thousands of Americans. Those affected by the disease describe it as like having your body turn to stone. Learn more and support the Scleroderma Foundation of America (@scleroderma). Don’t just be angry. Be active.