43. Yael Eisenstat. Working Inside the CIA and Facebook. President Mayhem Thinks Traumatic Brain Injuries Are No Big Deal. All Along The Watchtower. Trump vs Bloomberg at the Super Bowl. Democrats Continue to Eat Their Own. Hold the Door. 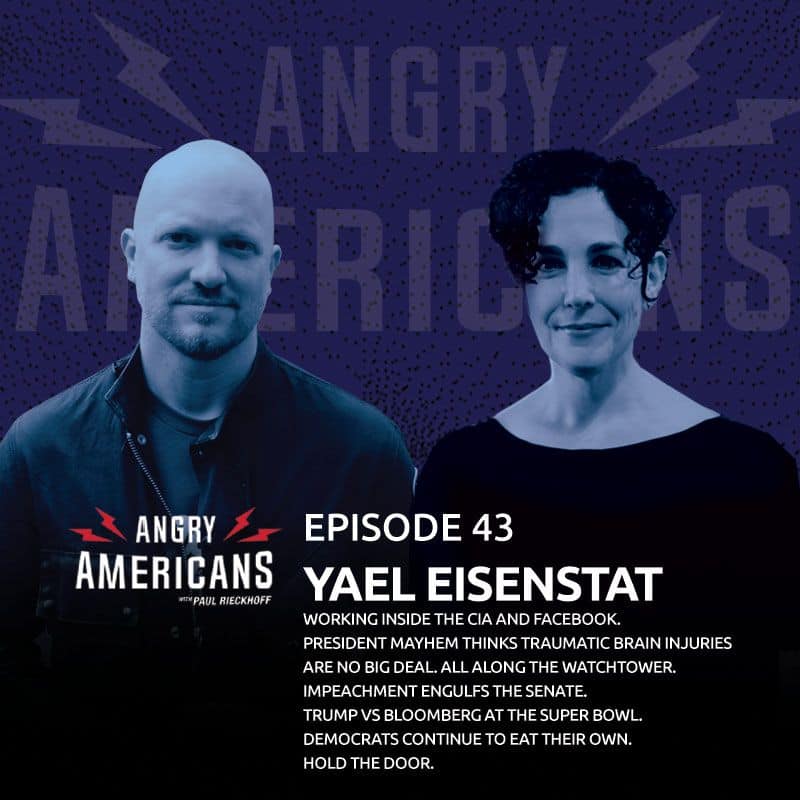 Fires engulfing Australia. Friendly fire on the 2020 campaign trail. Government forces firing on protestors in Hong Kong, Iran and Iraq. The fire of rocket attacks and enemy infiltrations hitting our troops from Kenya to Kabul. Tense protests in Richmond, Virginia continue to raise the heat–but thankfully, no fire. This time. And in Washington, the political fires of the last few years have grown to a roar– and now, the political fires engulf the entire capital–and the entire country. The impeachment trial of Donald J Trump has begun. It feels like it’s all closing in. And the walls of our country are being tested from outside–and from within. But even when the enemies are at the gates–and especially when the enemies are at the gates–there are guardians that hold the line. Standing watch on the ramparts of America–literally and ethically.

And in this episode, we hear candidly from one of the most impactful guardians of our democracy–who is now taking on the most powerful forces in technology and politics. [51:10] Yael Eisenstat (@YaelEisenstat) served courageously as a CIA officer for almost two decades. She now serves on the front lines of some of the most important issues of technology, national defense and protecting democracy in America. After leaving the CIA, Yael was named Global Head of Elections Integrity Operations at Facebook–a role she quickly left after facing deep resistance to change inside the tech giant. She would go on to reveal her CIA experience in a powerful and historic oped in The New York Times, blasting President Trump for politicizing her and her colleagues–including some that have died in the line of duty. She’s taken on Al-Shabaab militants, Mark Zuckerberg and Donald Trump.

And this episode, we highlight the vital work of The CIA Officers Memorial Foundation. We encourage you to check them out and be a helper in whatever way you can.

Angry Americans takes you behind the scenes of the CIA intelligence, Silicon Valley innovation and Washington incompetence. Download the hottest news and politics podcast in America that has been featured by Variety, CNN, The New York Times, Vice and more.