44. Susan Rice. Reactions to Kobe Bryant’s Death, The Grammy Awards and Mike Pompeo. Race in the Military. The Truth Behind Casualties in the Middle East. Tough Love For America. The Most Political Super Bowl Ever. Lizzo, Prince and P Funk. 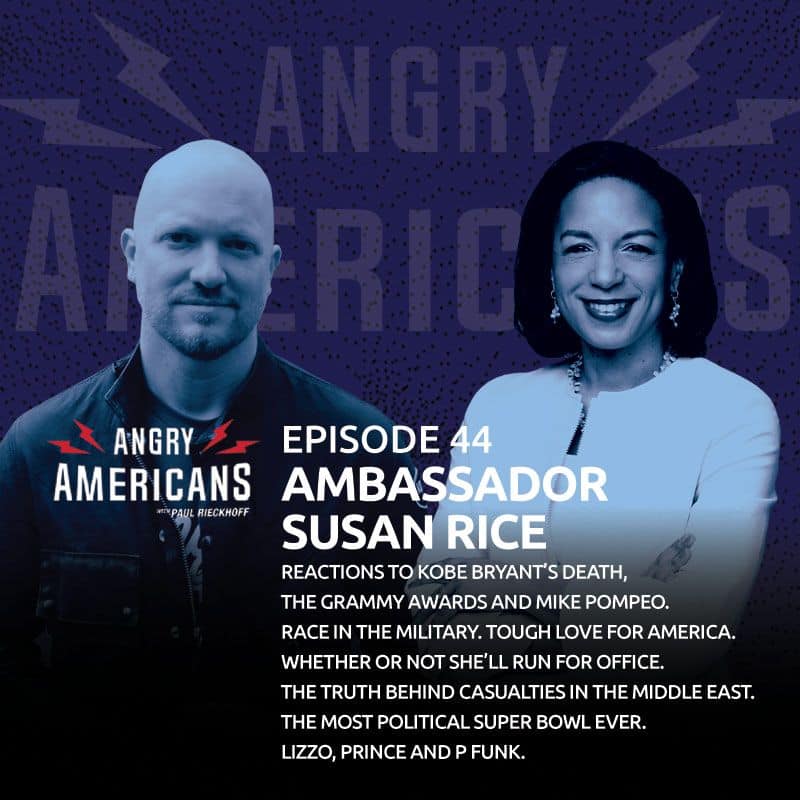 In this groundbreaking episode, you’ll hear a side of Ambassador Susan Rice that you’ve likely never heard before. This is Rice uncensored, frank and with the gloves completely off. She candidly shares her thoughts on the recent attacks on US troops in Iraq and the Trump impeachment, but also on the Grammy Awards, the death of Kobe Bryant, her first car, her favorite drink and what music makes her dance.

Rice lays out the single greatest threat facing America and shares what it was like to grow up as the daughter of an Army Air Force Officer who served with the legendary Tuskegee Airmen in a segregated military with restaurants that served German prisoners of war but not black soldiers like him. She opens up about what it taught her about leadership, about tenacity and about race in America. She also talks about if she’ll run for the US Senate in Maine and whether she’ll endorse a candidate in the Democratic primary.

Recorded before a live audience in New York with independence, experience and wit, host Paul Rieckhoff leads a fascinating and unique conversation with the former United Nations Ambassador, National Security Advisor and bestselling author of Tough Love. Rieckhoff also breaks down the politics of the Grammy Awards and the Super Bowl, the latest evolution of the scandal around Traumatic Brain Injuries in Iraq, and why Joe Rogan’s praise for Bernie Sanders has liberals going nuts.

And in the wake of the Kobe and Gianna Bryant tragedy, we focus on the inspiring work of After School All-Stars. Check them out and be a helper in whatever way you can.

This episode Angry Americans takes you behind the highest stakes of foreign policy, politics and global military conflict. Download the podcast that has been featured by Variety, CNN, The New York Times, Vice and has recently topped the News and Politics podcast charts in America.