45. Meghan McCain. The Iowa Disaster. Previewing New Hampshire. Haters, Ivanka and the Oscars. Life In On the Campaign Trail. Guns, Whiskey and the Future of the Republican Party. TV is Bullshit. Shotguns, Horses and Dogs. We Are Spartacus. 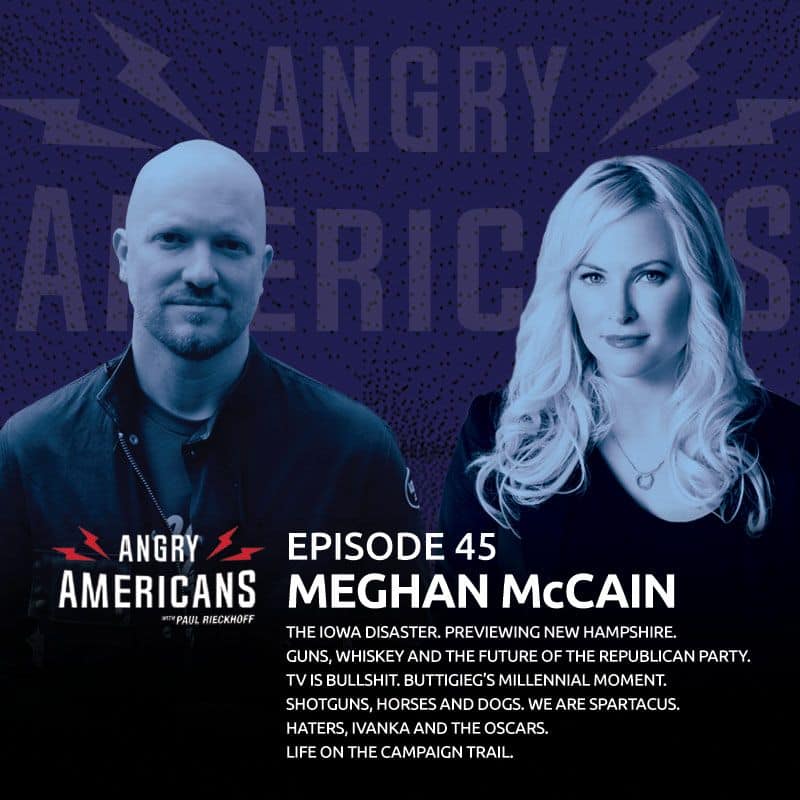 As the Iowa Caucuses remains undecided, impeachment rips America apart, and the State of the Union becomes a spectacle, Angry Americans gets you ready for the next Democratic Debate, the New Hampshire Primary and The Oscars with attitude and style. This news-making episode features controversial media sensation, Meghan McCain (@MeghanMcCain). [1:02:54] It’s Meghan uninterrupted and completely candid in a personal, extended interview that reveals sides of The View star you’ve never heard before. Meghan blasts the dysfunction of Iowa, shares why she loves shooting guns, and tells us what her favorite drink is.

Recorded before a live audience in New York at the Classic Car Club Manhattan (@CCCManhattan) with independence, experience and wit, host Paul Rieckhoff (@PaulRieckhoff) leads a fun and extensive talk with the controversial author and Republican activist. And Rieckhoff breaks down the massive politics of the Super Bowl, Trump’s pre-game interview with Hannity, The State of the Union, the Anniversary of the Tet Offensive and passing of legendary actor Kirk Douglas.

And on the anniversary of the Tet Offensive in Vietnam in 1968, we focus on the moving work of Vietnam Veterans Memorial Fund. Please check them out the stories of those that died during that pivotal time.

This episode Angry Americans takes you behind the highest stakes of media, life in the spotlight and inside one of the most powerful modern political families in America. Download the podcast that has been featured by Variety, CNN, The New York Times, Vice and has recently topped the News and Politics podcast charts in America.