48. Rosie Perez. Rosie Breaks Down Fury vs Wilder 2. The Weinstein Verdict. Never Play to the Crowd. Boxing as a Metaphor for Life (and the 2020 Election). Rosie vs Rudy (Giuliani). The Problem with Bernie. The Cokehead Car Story. 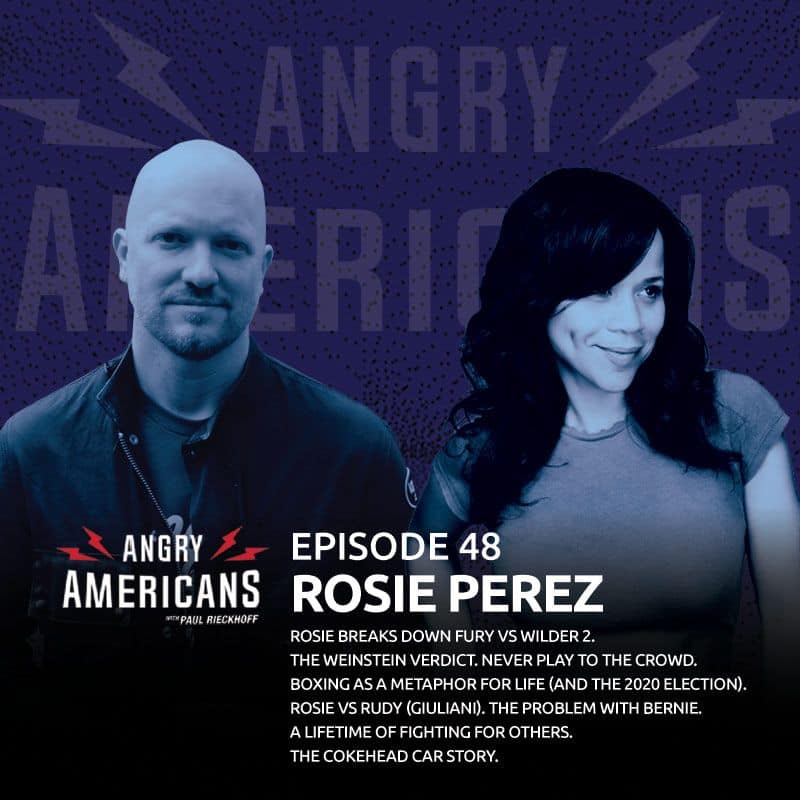 Legendary actor and activist Rosie Perez (@RosiePerezBklyn) is a fighter. And this is the Oscar-nominated icon like you’ve never heard her before. [1:07:15] Uncensored, candid and timely, Rosie shares her harrowing path to success that you’ll never forget. One of the most beloved actors of our time, she’s also a life-long activist, survivor, philanthropist, author, choreographer and boxing expert. An advocate for people living with HIV/AIDS, the people of Puerto Rico, survivors of sexual assault and anyone anywhere facing mental illness. Rosie also knows and loves boxing. Always the skilled analyst, truth-teller and lesson-teacher, “The First Lady of Boxing” breaks down the massive heavyweight championship fight between Tyson Fury and Deaonte Wilder, shares her candid thoughts on the groundbreaking Harvey Weinstein verdict after her recent testimony in the trial, reflects on her time as a co-host of The View, digs into Trump and the Democratic candidates, and talks about her amazing first car.

Rosie is a great American success story. After surviving a childhood of abuse, losing her mother to AIDS, and living in a foster group home, she has risen to become an inspiration to millions worldwide. First making her name as a dancer on Soul Train and as a choreographer for the Fly Girls on TV’s In Living Color, she exploded into fame after unforgettable parts in Do the Right Thing and White Men Can’t Jump. Rosie would rise to an Oscar nomination for her role in Fearless, a seat co-hosting ABC’s The View, and authoring Handbook for an Unpredictable Life: How I Survived Sister Renata and My Crazy Mother, and Still Came Out Smiling (with Great Hair). President Obama appointed her to The Presidential Advisory Council on HIV/AIDS (PACHA) and she has served as the Artistic Chair of Urban Arts Partnership–an arts education nonprofit that supports public schools and is also devoted to supporting immigrants, LGBTQ, special needs and at-risk students. Rosie now stars alongside Anne Hathaway, Ben Affleck, and Willem Dafoe, in the Netflix film The Last Thing He Wanted, which is set around the Iran-Contra scandal during the Regan administration. She also stars in the action film Harley Quinn: Birds of Prey with Margot Robbie, the forthcoming HBO series The Flight Attendant and the children’s film, Clifford the Big Red Dog.

From his uniquely sharp perspective, our host Paul Rieckhoff (@PaulRieckhoff) is a passionate political independent, Iraq veteran and renowned activist who leads the moving conversation with Rosie. He also breaks down the South Carolina Democratic debate, the rise of Bernie Sanders, the shocking spread of the Coronavirus, Trump’s trip to India, and more news you need to know about. And as in every episode of Angry Americans, Rieckhoff offers an inspiring way to turn your righteous anger into positive impact. It’s another powerful episode of the show that’s been rising on the news and political charts and featured in Variety, NPR, The New York Times and more.