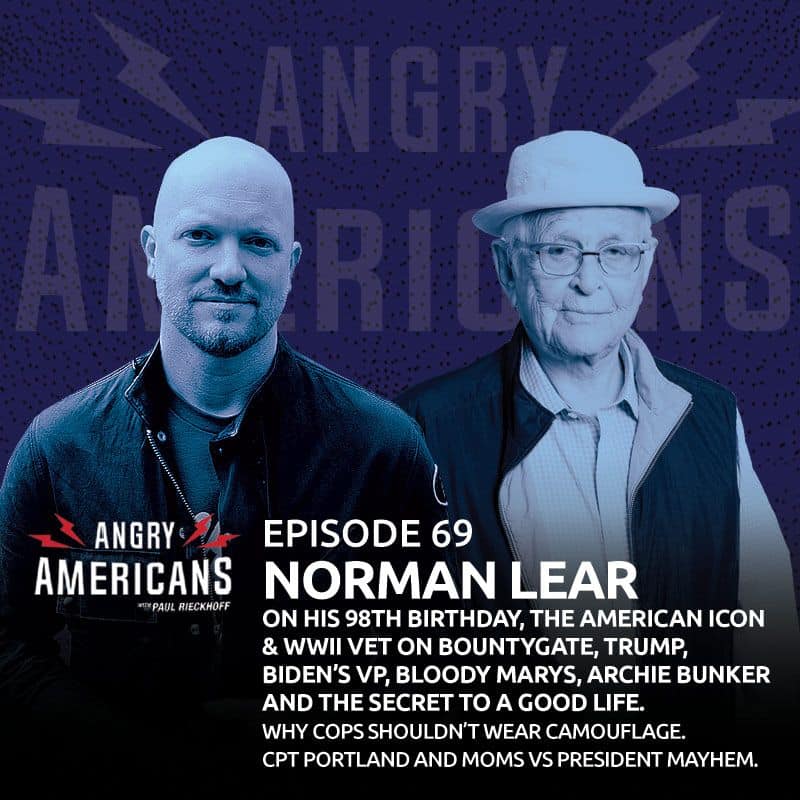 If you’re not angry, you’re not paying attention. And Norman Lear (@TheNormanLear) is understandably angry. [57:52] A true icon and a dedicated patriot, the legendary creator of All in the Family, Maude, Good Times, The Jeffersons, Sanford and Son and over 100 other TV shows has defined American television, culture and race-relations for generations. He’s a decorated World War Two veteran that flew 52 combat missions over Europe, a trailblazing philanthropist, and a tenacious civil rights activist. Norman founded People For The American Way to defend constitutional values like free expression, religious liberty, equal justice, and the right to meaningfully participate in our democracy. He purchased a copy of the Declaration of Independence and put it on tour across America for ten years to educate young people. He’s a Kennedy Center Honoree; a recipient of the National Medal of Arts, a Peabody Lifetime Achievement Award, an inaugural inductee to the Television Academy Hall of Fame. He won five Emmys and a Golden Globe; was labeled the “No. 1 enemy of the American family” by Jerry Falwell; made it onto Richard Nixon’s “Enemies List”; was presented with the National Medal of the Arts by President Clinton. Norman is wonderful, kind, wise–and mad as hell about the state of our country and the leadership of our President. And ahead of his 98th birthday, the Hollywood titan talked exclusively with our host, and his friend and mentee, Paul Rieckhoff (@PaulRieckhoff). It’s Norman Lear extended and candid like you’ve never heard him before. If you care about America, you’ve got to hear this.

And, per usual, Rieckhoff rips into the week’s news you need to know about from the violence in Portland, to Trump’s 180 on masks, to the death of treasured Congressman John Lewis. Activist and Army veteran Rieckhoff goes beneath the headlines with a spark, independence and wit that you can only find on Angry Americans.

Angry Americans is America’s best weekly podcast for independent politics, news and culture–a pod that continues to make news and top the political and news charts worldwide. Fresh off news-making appearances on CNN, MSNBC, and others, the patriotic and non-partisan Rieckhoff blazes through the week’s news you need to know. He’s a trusted, fresh and powerful voice of truth to guide you through these perilous times–with grit, humor and positivity.

You can also check out kick-ass video–including this conversation with Norman Lear–on the Righteous Media YouTube page and follow Angry Americans on Instagram, Facebook and Twitter. And check out the exclusive Angry Americans community on Patreon. Support this strong, independent media voice that speaks truth to power. You also get unique access to Paul Rieckhoff and our inspiring guests, and discounts on merch and special content not available anywhere else. Angry Americans Patreon members also get to meet influential friends of the pod like Meghan McCain, Henry Rollins, Susan Rice and Pete Buttigieg. Don’t just be angry, be active. Join the movement.