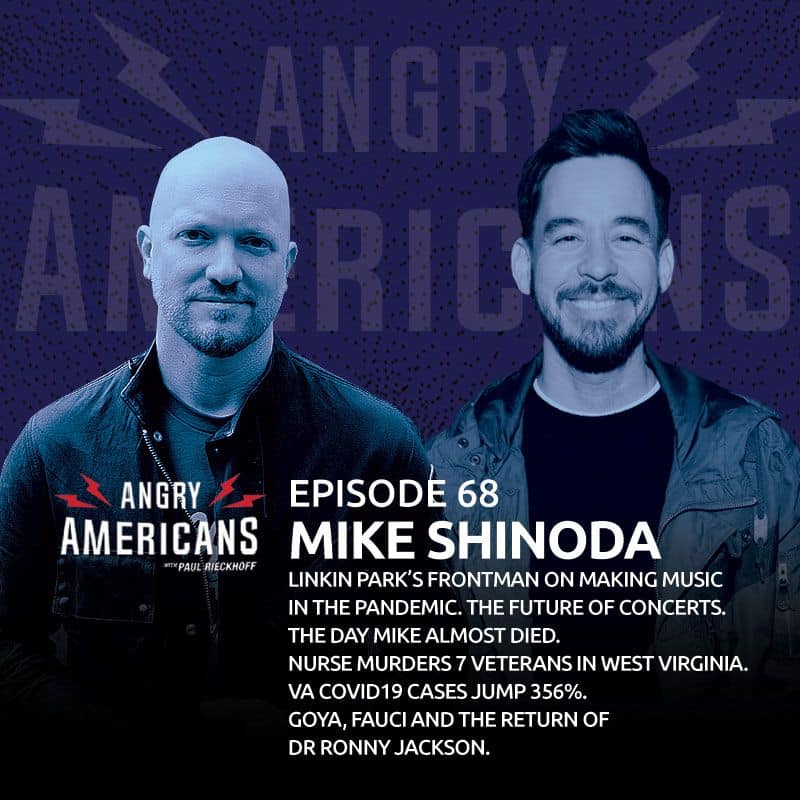 The frontman for the legendary rock band, Linkin Park (@LinkinPark), Mike Shinoda (@MikeShinoda) is a true creative genius. [1:01:10] His groundbreaking work spans genres, geography and generations. Mike has performed with brilliant icons ranging from Jay-Z to Paul McCartney. Throughout his career Mike Shinoda has found ways to channel his righteous anger into positive impact. And to connect, unite and empower others worldwide. He’s a leader in the arena. A voice of reason. A conscience. A great American success story. A parent. An activist. A philanthropist. A patriot.

Mike and Linkin Park have a massive global following–and hold the title as the most-liked band on Facebook and amassing over 7.7 billion YouTube views. He has sold over 55 million albums worldwide, sold out stadiums around the world, and earned 2 Grammy Awards, 5 American Music Awards, 4 MTV VMA Awards, 10 MTV Europe Music Awards, 3 World Music Awards, and “Rock Album of the Year” at the 2018 iHeartRadio Music Awards for Linkin Park’s seventh studio album, One More Light

In 2014, Mike and Paul partnered on a groundbreaking campaign with Iraq and Afghanistan Veterans of America (IAVA) to support veterans that included dozens of Linkin Park shows and reached hundreds of thousands of people nationwide. And Mike’s got a new project that’s bringing people together and opening doors for others worldwide: “Dropped Frames Vol.1” is out now. He joined host Paul Rieckhoff (@PaulRieckhoff) for an extended, candid and unedited conversation about the new project, his pandemic experience, what he thinks the future of concerts look like, what he thinks about Trump, Black Lives Matter and the toxicity of social media. AND, Mike shares an amazing first car story–and of course, his favorite drink.

And, Rieckhoff (@PaulRieckhoff) kicks-off the show by tearing into the top news you need to know after an exceptionally wild week in America. From the explosion of coronavirus cases at the Department of Veterans Affairs, to the shocking murder of seven veterans at a facility in West Virginia, to the latest on the Russian bounties paid to kill US troops, independent author, Army veteran and activist Rieckhoff rips through the headlines like only he can.

Angry Americans is America’s best weekly podcast for independent politics, news and culture–a pod that continues to make news and climb the political and news charts worldwide. Fresh off news-making appearances on CNN, MSNBC, and others, the patriotic and non-partisan Rieckhoff blazes through the week’s news you need to know. He’s a trusted, fresh and powerful voice of truth to guide you through these perilous times–with grit, humor and positivity.

You can support this strong, independent media voice that speaks truth to power by joining the exclusive Angry Americans community on Patreon. Get access to Paul Rieckhoff and our inspiring guests, and discounts on show merch and special content not available anywhere else. Our vigilant Patreon members also get opportunities to meet influential guests of the pod like Henry Rollins, Susan Rice, Meghan McCain and Pete Buttigieg. You can also check out kick-ass video–including this conversation with Joy Taylor–on our YouTube page and follow Angry Americans on Instagram, Facebook and Twitter.