71. Rex Chapman. The Master of Twitter Inspiration and Former NBA Star on the Pandemic, Trump, BLM, and Sports Reopening. Shutting Down Mitch McConnell. Opening Up About Opioid Addiction. Playing for Team USA with the Admiral. Going Viral in a Pandemic. 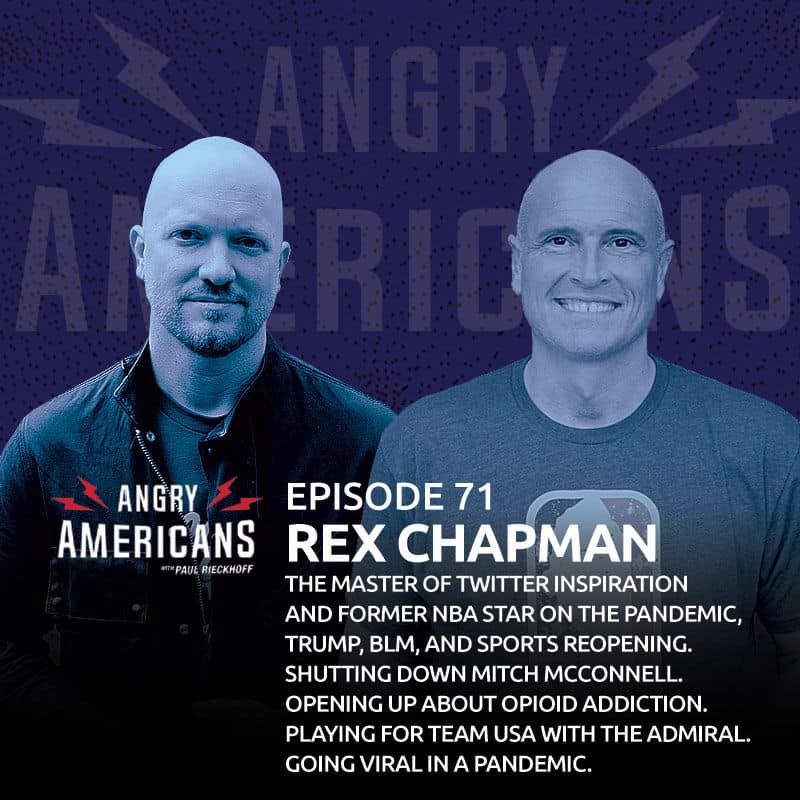 Former NBA star (@RexChapman) [17:53] has quickly become one of the single most popular and beloved figures on Twitter. Rex was a basketball superstar. He took the Kentucky Wildcats to the Sweet 16. And played for the USA national team in the Pan-AM games.

He was an NBA lottery pick, going #8 overall in the 1988 draft. He electrified America in the dunk competition, and played for 12 seasons for the Charlotte Hornets, Washington Bullets, Miami Heat and Phoenix Suns. Always a fan favorite, Rex once dropped 39 points on Michael Jordan. But injuries eventually drove him out of the game. And into addiction. After his playing days ended, Rex fell into gambling and the deepest depths of opioid addiction. He fell hard–and he fell in public. And it almost killed him. But Rex Chapman has always been a fighter. And he fought back. He got help. He got support. And he started a new life after opioids, helping others where he could.

Especially on Twitter–where his account has become a daily visit for millions. From friends of this pod like Ambassador Susan Rice, Ron Perlman, Stephanie Ruhle and Jeffrey Wright, to Booger McFarland and Martina Navratilova, to LTC Alexander Vindman, to Megyn Kelly, to Trevor Noah, to McHammer, to Congressman Justin Amash and Congresswoman AOC–they all follow Rex. And he’s not just posting videos. He’s calling BS. He’s putting out good information. And he’s making an impact.

Angry Americans is topping podcast charts worldwide and making news on CNN, MSNBC, and more. It’s your trusted place for a weekly breakdown of the news and a strong dose of inspiring content to guide you through these precarious times.

Visit the Righteous Media YouTube page and follow Angry Americans on Instagram, Facebook and Twitter for video of this exclusive conversation with Rex Chapman and video of all our dynamic, recent guests ranging from Mike Shinoda of Linkin Park to Willie Geist to Sam Bee to Rosie Perez. Join the exclusive Angry Americans community on Patreon to support this critical, independent media voice that speaks truth to power. You also get unique access to Paul Rieckhoff and our inspiring guests, and discounts on merch and special content not available anywhere else. Patreon members also get to meet influential friends of the pod like Susan Rice, Mayor Pete Buttigieg, Meghan McCain and Henry Rollins. Whether you’re a Republican, Democrat or independent, this is your new favorite weekly podcast for politics and news. Don’t just be angry, be active. Join the movement.