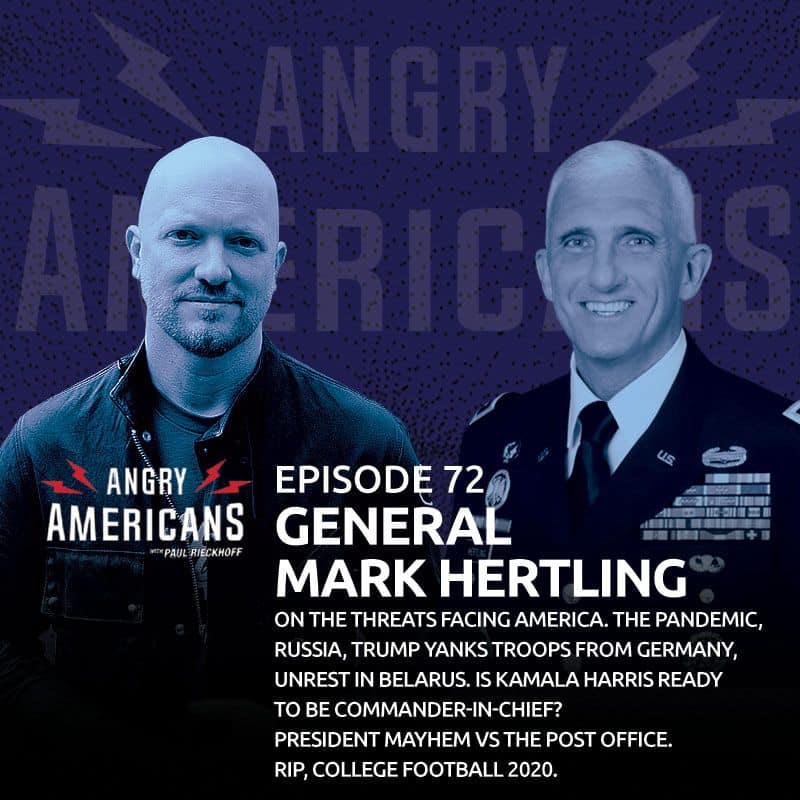 As the pandemic, the 2020 election and Black Lives Matter protests dominate new headlines, America’s national security is more vulnerable than at any other time in recent memory. Our military has been weakened, our troops have been politicized, our people are sick, our country is divided, and our enemies are celebrating. Everyone is talking about the upcoming election. Few are talking about how to protect it from the Russians. Or how to deal with a multitude of other national security threats that face our country at this fragile time. But Paul Rieckhoff (@PaulRieckhoff) is focused on it. And the independent activist, Army veteran and national security analyst is joined by retired Army Three-Star General Mark Hertling (@MarkHertling) [53:32] for an important and inspiring conversation that you need to hear. General Hertling served almost four decades in the US Army where he commanded US Army Europe and Seventh Army, led over forty thousand soldiers, cared for over one hundred thousand family members, and partnered with the armies of fifty countries in the European theater. Hertling is a military analyst for CNN, was appointed by President Obama to the President’s Council on Fitness, Sports, and Nutrition, and is a senior vice president at Florida Hospital. Hertling is one the most dynamic military experts in the media and a highly-sought after expert on leadership, national security and health. He breaks down the threats facing America, analyzes the leadership of President Trump and newly nominated VP candidate and Senator Kamala Harris, and shares key insights about how to lead in tough times like this–whether you’re leading a large company or your own family. It’s another important and inspiring episode of Angry Americans—the best weekly podcast in America for independent politics, news and culture.

Angry Americans is your trusted place for a weekly breakdown of the news and a strong dose of inspiring content to empower you in these difficult times. That’s why the show continues to top podcast charts worldwide and make news on CNN, MSNBC, and more.

Check out Angry Americans on Instagram, Facebook and Twitter–and the Righteous Media YouTube page for video of this conversation with General Mark Hertling and video of all our inspiring recent guests from former NBA star Rex Chapman, to Linkin Park frontman Mike Shinoda, to Ambassador Susan Rice, to Westworld star Jeffrey Wright.

And visit the exclusive Angry Americans community on Patreon to support this critical, independent media voice that speaks truth to power and always keeps a special focus on veterans, national security, and first-responders issues. Get special access to our host, Paul Rieckhoff, our dynamic and diverse guests, and discounts on Angry Americans merch and special content not available anywhere else. Our Patreon members also get to meet influential friends of the pod like Henry Rollins, Ambassador Susan Rice, Mayor Pete Buttigieg, and Meghan McCain. Republican, Democrat or independent–this is a weekly podcast for politics and news you should subscribe to now. Don’t just be angry, be active. Join the movement. Angry Americans empowers independent Americans everywhere and is powered by Righteous Media.