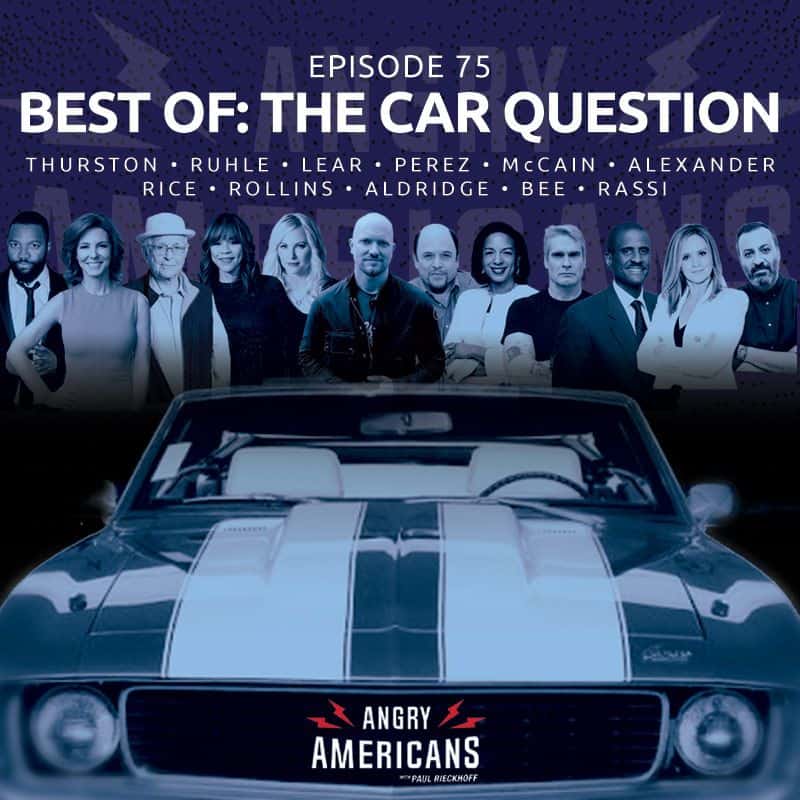 We’ve had some amazing guests join the pod over the last year and a half. And every single one of them has gotten “The Car Question”. As we end an epically crazy summer, and roll into a chaotic and daunting fall, our host Paul Rieckhoff (@PaulRieckhoff), shares pieces of some of the most fun conversations we’ve ever had: Rosie Perez, Henry Rollins, Stephanie Ruhle, Norman Lear, Meghan McCain, David Aldridge, Ambassador Susan Rice, Jason Alexander and Sam Bee. If you’re gonna be in a car, or just in your house, put on the cruise control, lean the seat back, and hit play on this fun and dynamic episode. It’s a great pitstop after an intense and exhausting summer. And another innovative hard-driving episode of Angry Americans—the hottest weekly podcast in America for independent politics, news and culture. The show that continues to lead the pack of podcasts worldwide and make news on CNN, MSNBC, and more.

And cruise on over to the Angry Americans community on Patreon to support this independent media voice that drives truth to power and always keeps an eye on the road for veterans, national security, and first-responders issues. Get special inside-the-garage access to our host, Paul Rieckhoff, our dynamic and diverse guests, and discounts on Angry Americans merch and special content not available anywhere else. Patreon members also get to meet influential friends of the pod like Henry Rollins, Ambassador Susan Rice, Mayor Pete Buttigieg, and Meghan McCain. Republican, Democrat or independent–this is a weekly podcast for politics and news you should subscribe to now. Don’t just be angry, be active. Jump in the driver’s seat and join the movement. Angry Americans empowers independent Americans everywhere and is powered by Righteous Media.