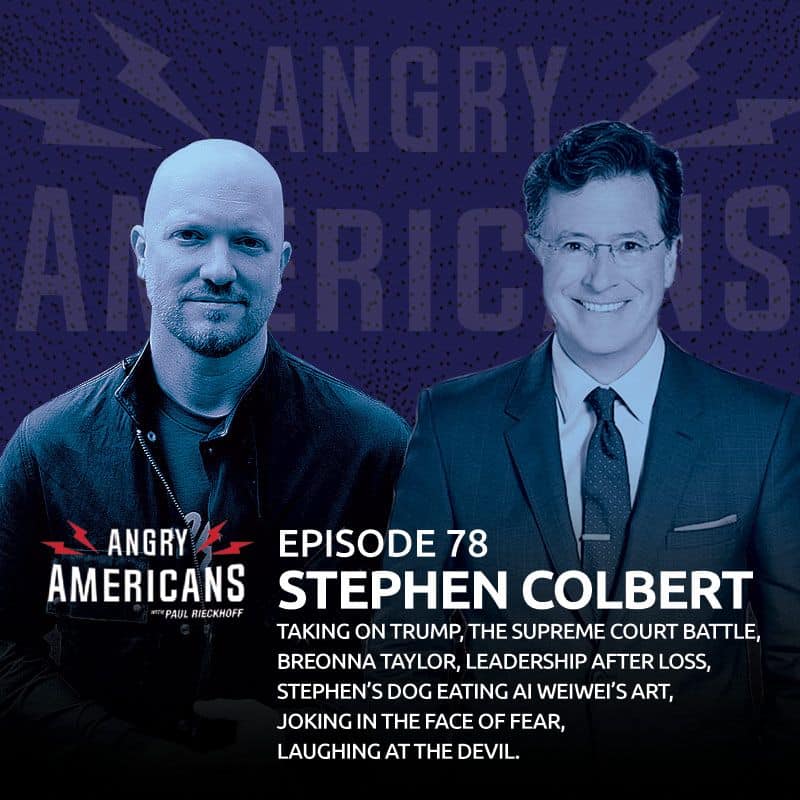 “Fear is the mind killer. If you’re laughing you’re not afraid.” Wise words in this groundbreaking new episode from a truly iconic guest: Stephen Colbert (@StephenAtHome). [06:14] Stephen joins us from his home–uninterrupted and unedited in this fun, candid and inspiring episode. As we enter the most trying and important fall of our lifetime, Angry Americans is bringing in the big guns to get you through this trying time. And there are few bigger than Stephen Colbert.

President Mayhem is sheer chaos. He’s doing anything and everything he can to disrupt our country, our unity and our day. And this conversation is the antidote. Stephen and host Paul Rieckhoff (@PaulRieckhoff) break down the current state of the country and what the future might hold. Stephen beams in from his home office and shares wisdom, jokes and some amazing stories. He talks about his trip to Iraq to visit the troops and why he shaved his head while he was there. His first car story is one of the best we’ve ever had. His answer to what makes him happy is heartwarming. But also painful. And expensive. This is Stephen Colbert like you’ve never heard him before. You’ll just have to listen.

If you’re not angry, you’re not paying attention. Especially now. But as always, this podcast isn’t just about being angry. It’s also about being active. It’s about turning your emotions into positive impact. And it’s about community. Join the Angry Americans community on Patreon now to get special inside access to our host, Paul Rieckhoff, our dynamic guests, and discounts on Angry Americans merch and special content not available anywhere else. You will also support this critical, independent media voice that always speaks truth to power.

This episode is possible thanks to those Patreon members and thanks to support from Uncle Nearest Premium Whiskey. Uncle Nearest is the most awarded American whiskey or bourbon of 2019 and 2020.

You can also see video of this entire conversation with Stephen Colbert on the Angry Americans website or on our YouTube page. Angry Americans empowers independent Americans everywhere and is powered by Righteous Media. Join the movement. Download this episode now.