79. Christine Todd Whitman. Sh!tshow Debate Recap with the Former NJ Governor. The Future of the Republican Party. The Impact of The Lincoln Project. Her Message to 9/11 First Responders Now. Grandparenting in the Pandemic. 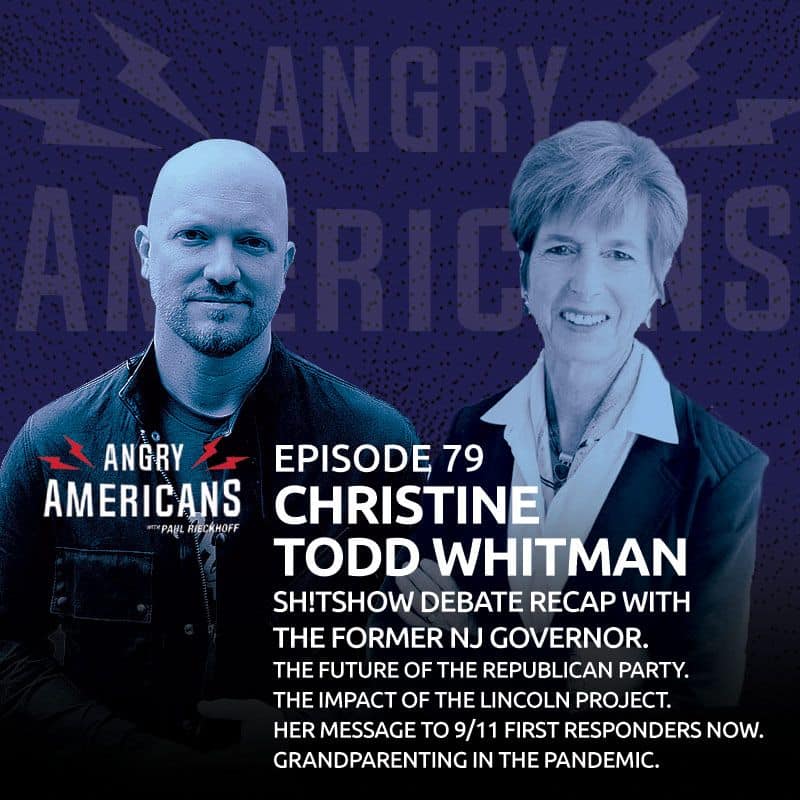 The first debate between Trump and Biden was a disgusting mess. But what did it really mean for the election? And for America? Will it change anything? Will it move independents and Republicans? What is the future of the Republican party if Trump loses? Former New Jersey Governor, Environmental Protection Agency Chief and current Chairwoman of Republicans and Independents for Biden, Christine Todd Whitman (@GovCTW) is our important, inspiring and iconic guest for this insightful, rapid-fire episode. [22:07]

October is here, football is back, schools are open (sorta), and the 2020 election is fully underway. This is a fall of chaos. And Angry Americans is continuing to guide us through it all. With powerful guests and a unique, independent and hard-hitting perspective unlike anywhere else in the media.

Trump and Biden are fully engaged now in open political combat–and America is caught in between. Governor Christine Todd Whitman and host Paul Rieckhoff (@PaulRieckhoff) break down the pieces of the debate that are most important–and the key pieces you might have missed. And rather than navel-gazing, they talk about what could happen now as Trump activates white nationalists nationwide, and promises to fight the results if he loses. All while Biden just fights for oxygen. Election Day won’t be the end, but just the next chapter in a time of tremendous chaos.

This pod has led the way on national security, veterans and first-responders issues, and Rieckhoff, a 9/11 First Responder himself, asks Todd Whitman what her message is for dying heroes, after she and the EPA told them the air was clear 19 years ago. Todd Whitman is the first woman in history elected as Governor of New Jersey, and shares how she got there, whether or not she and others will remain Republicans if Trump wins, and what the future of the party could look like if he doesn’t.

If you’re not angry, you’re not paying attention. Especially after that debate. But this podcast isn’t just about being angry. It’s also about being active, informed and vigilant. It’s about speaking truth to power—and challenging the traditional media. And it’s also always about community. You can join our Angry Americans Patreon community–and get special inside access to our host, Paul Rieckhoff, our dynamic guests, and discounts on Angry Americans merch and exclusive extra content not available anywhere else. This episode is possible thanks to those Patreon members and support from Uncle Nearest Premium Whiskey. Uncle Nearest is the most awarded American whiskey or bourbon of 2019 and 2020.

Join the movement. Download this episode now. And at AngryAmericans.us or on our YouTube page, you can watch this entire conversation with Governor Todd Whitman and recent episodes with Stephen Colbert, Rosie Perez, Meghan McCain, Mike Shinoda, Jeffrey Wright and more. Angry Americans empowers independent-minded Americans everywhere and is powered by Righteous Media.